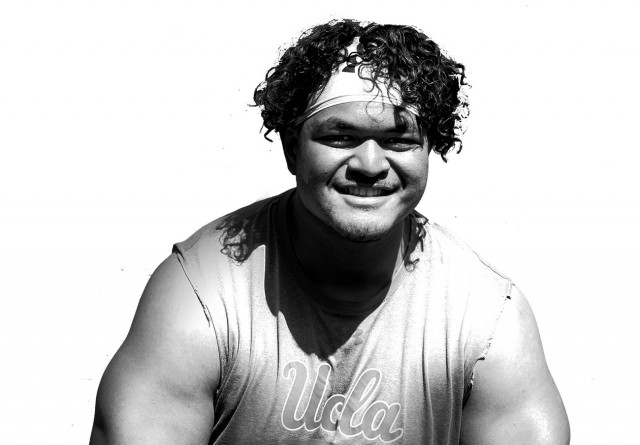 A handful of Bruins have a cultural connection to one another.

“Talking to each other, sharing Polynesian experiences and culture, (Tongan sophomore defensive lineman Atonio Mafi) and the rest of the team has really shared that,” said freshman offensive lineman Duke Clemens.

Clemens and Mafi are part of the almost 10% of UCLA football’s roster that is made up of Polynesian athletes.

The trend of recruiting players from the Pacific islands is nothing new for college football programs. Brigham Young and Utah are two examples of West Coast programs famous for their rosters filled with players native to the oceanic region of Polynesia. There has even been a trophy given out since 2014 – the Polynesian College Football Player of the Year Award – to showcase the Polynesian student-athletes all around the NCAA.

UCLA has two Polynesian players on the 2019 Watch List – senior center Boss Tagaloa and redshirt junior tight end Devin Asiasi – but the culture for players hailing from west of the continental United States goes a little deeper for the Bruins.

Mafi, Asiasi’s cousin, said the community of Polynesian Bruins made him immediately feel at home, as he was able to identify with the culture he had grown up around.

“There’s a lot of Polys that were here already,” Mafi said. “Especially my cousin being (Asiasi), and I grew up watching him and (Tagaloa) in the Bay Area when they went to De La Salle (High School). They were here, and then my roommate (sophomore defensive lineman Tyler Manoa) also had Poly (heritage) so it just connected really well.”

Mafi grew up in California but emphasized the importance of his Tongan heritage in his upbringing. And while Mafi is from Tonga, there’s an approximated population of three million Polynesians spread across more than a thousand islands, with different cultures in that group.

While there’s camaraderie between Polynesian players, Mafi said the cultural ties of Pacific Islanders play into fun competitions between players like him and other teammates, including Tagaloa.

“Even though I’m full Tongan and (Tagaloa) is full Samoan, it’s fun and we get to joke around with little rivalries,” Mafi said. “We’re both Polynesian so we do some of the traditional dances in the locker room so it’s all fun and games.”

If some of those dances make it out into the field, it’s not an accident.

Even Bruins who don’t come from Polynesian backgrounds, like graduate transfer linebacker Jason Harris, have noticed the spirit from their teammates.

“I mean coming from Illinois State we maybe had one other (Polynesian) and he transferred from Notre Dame,” Harris said. “So yeah, it’s a big culture change for me, but they are fun to be around. There are a lot of passionate guys in that culture so it has been a blessing to be around (them).”

While Mafi and Tagaloa might embrace the more playful side of the Polynesian Bruins’ relationships, teammates are serious sources of support for Bruins far from their homes.

Clemens, who grew up in Hawaii, said Mafi has helped him feel more at home when playing and traveling with the team.

“Seeing my family is kind of hard – I’ve only gotten to see them once since getting here in June,” Clemens said. “When we went to the Bay (Area) to play Stanford, (Mafi) took me in and I met his brother and his family. Next year when we play Hawai’i, he’s definitely coming to my place.”

But Clemens also said the dynamic is somewhat different for him as a Hawaiian compared to players who may come from islands like Tonga and American Samoa.

“Growing up in Hawaii is a lot different than here in the mainland,” Clemens said. “But (my family and I) are also used to the mainland (since) we come here to vacations and stuff like that, so it wasn’t too big of a transition first getting here.”

Polynesians didn’t have an immediate place in either the NCAA or NFL. After the first Polynesian debuted in the NFL in 1945, the first Pro Football Hall of Fame Polynesian inductee didn’t happen until Junior Seau was enshrined 70 years later.

Mafi said his experience going to high school in Tonga his sophomore year – where he spoke the native language – helped contextualize the importance of his representation as a Polynesian football player.

“It helped me really get in touch with my culture, the traditions and what it really means to be a Polynesian,” Mafi said. “Growing up watching (retired Steelers safety) Troy Polamalu, and seeing some of the first Polynesians doing it big in the NFL, it becomes, ‘Why not me?’ Even going to college, not just for football, but why not go to college and (receive an) education as well?”

Clemens also cited younger players such as Alabama quarterback Tua Tagovailoa and Tennessee Titans quarterback Marcus Mariota – the inaugural winner of the Polynesian College Football Player of the Year – as proof Pacific Islanders are branching out from their stereotype of serving as mostly linemen.

But when asked why 66% of this year’s PCFPY Watch List athletes are linemen, Clemens and Mafi both had the same answer.

“It’s definitely the food,” Clemens said. “Polynesian food is some of the best stuff I’ve ever tasted, and it gets you big if you’re eating for it.”