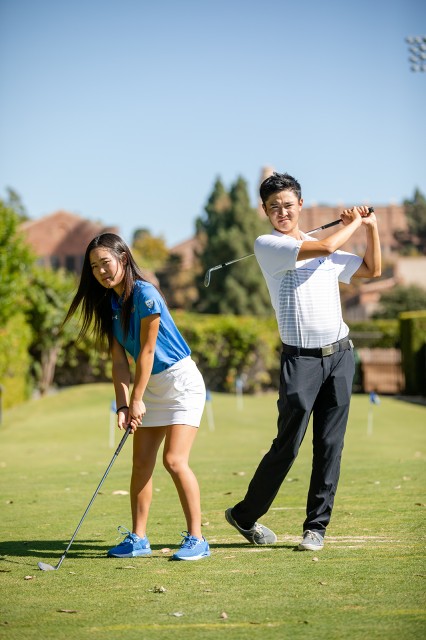 Senior Hidetoshi Yoshihara and freshman Yuki Yoshihara grew up playing golf in Japan, under the instruction of their father – a professional instructor. The siblings went to the same high school and, as of this fall, both compete for UCLA men's and women's golf, respectively.(Tanmay Shankar/Assistant Photo editor)

Seven-year-old Hidetoshi Yoshihara stepped foot on the practice course to prepare for his first golf tournament.

His 3-year-old sister, Yuki Yoshihara, accompanied him to the course and watched intently.

Now, the Yoshiharas are the lone pair of student-athlete siblings within UCLA’s men’s and women’s golf teams. Both siblings learned the nuances of the sport under their father, a professional golf instructor in Japan.

Despite their shared passion for golf, the siblings insisted there was never a rivalry.

“We obviously played games, like putting games and accuracy contests in the driving range,” Yuki Yoshihara said. “But it was never a bad rivalry – it was just fun and competitive.”

Yuki Yoshihara qualified for the California Interscholastic Federation state final as a freshman in high school, while her older brother didn’t qualify until his senior year. Although she never won the individual state title like her brother, she became the first female golfer from Woodbridge High School to win the Pacific Coast League individual title in 2018.

Despite cementing her own legacy at Woodbridge, Yuki Yoshihara said she appreciated learning from her older brother and his high school experiences.

“I knew that practicing with him or playing on the course with him, he would help me out on the technical aspects of golf and also course management,” Yuki Yoshihara said. “In high school, I didn’t have any course management at all, so having someone who played in competitive tournaments helped me realize that it was important.”

Hidetoshi and Yuki Yoshihara were born and raised in Niigata, Japan. Hidetoshi Yoshihara first touched a golf club when he was 2 and was competing in tournaments by age 7. Yuki Yoshihara’s early golf career followed a similar path.

Their father taught the siblings the importance of accuracy in their golf games, as opposed to driving distance.

“My dad emphasized short game, putting and chipping,” Yuki Yoshihara said. “He taught us that those were the most important parts – not hitting it far. Having a good short game and getting up and down will get you far.”

Hidetoshi and Yuki Yoshihara participated in tournaments throughout their childhoods. The siblings said Japan had a competitive youth golf environment, which strengthened the bond between them.

“There’s a junior association (in Japan) that I used to play in every year, and it was pretty competitive,” Hidetoshi Yoshihara said. “Growing up, our tournaments (were) at different dates, so we would go see each other play. We’d always cheer each other on, … so I think we’re pretty supportive in terms of playing tournaments, but when we’re practicing, we just kind of mess around.”

In 2011, the family moved to Irvine. The siblings said they do not recall the exact reason they immigrated to the United States, but the search for increased golf opportunities played a role.

“It wasn’t our decision to move,” Hidetoshi Yoshihara said. “Our dad wanted us to come (to America) so our golf game would be better. … I think (my sister and I) both wanted to come, but we just didn’t have any expectations.”

Upon settling down in the U.S., both siblings attended Woodbridge, where the duo rewrote the school’s golf record books.

In his senior year, Hidetoshi Yoshihara became the first male player from Woodbridge to make it to the CIF state tournament. He won the 2016 CIF state individual title by one stroke after getting a birdie on each of his final four holes.

But Woodbridge golf coach K. Tracy Roberts said it didn’t take long for Yuki Yoshihara to pave a path of her own.

“Coming in as the little sister, (Yuki Yoshihara) had to establish her identity,” Roberts said. “When your brother has a lot of notoriety in the golf community by winning state, it was like she was Hidetoshi’s sister. By the end of her freshman year, she had established herself as Yuki.”

The Yoshiharas both played for Roberts, who said he has been adorning his economics classroom with plaques of CIF championships and team pictures through the years.

The classroom also served as a practice course where players – led by Hidetoshi Yoshihara – would practice their golf games and wreak havoc.

“I still remember players in my classroom chipping and putting,” Roberts said. “I kept clubs and balls in my room, and they were tearing up the carpet and putting holes in the walls just to hang out with one another.”

While Hidetoshi Yoshihara said the in-school practice sessions helped him develop as a golfer, the hours spent with Roberts meant more than that.

“He was not like one of those high school coaches that let you do whatever you wanted,” Hidetoshi Yoshihara said. “I was a knucklehead when I came in as a freshman, and by senior year I had gotten better. He had a pretty big impact on me just being a good person on and off the golf course.”

Roberts, who is entering his 32nd year coaching the Woodbridge men’s and women’s golf teams, said the Yoshihara siblings were the most decorated high school golfers he has ever coached.

“It’s very easy to say that they are the two best players – men’s and women’s – in my entire tenure,” Roberts said. “Not only are they great golfers, but they are even better people. … They were incredible teammates and were very supportive of other teams and players.”

After the siblings graduated from Woodbridge, both were highly recruited athletes. Both siblings were recruited by multiple colleges.

Hidetoshi Yoshihara received his first letter of interest from UCLA during the middle of his sophomore year and, despite visiting Stanford and Pepperdine, he signed his letter of intent in November 2015.

Unlike her older brother, Yuki Yoshihara initially preferred Pepperdine over UCLA, but said UCLA women’s golf coach Carrie Forsyth was a significant factor in her change of heart.

Even though the younger sibling said her older brother wasn’t an influence on her choice to come to Westwood, she said having him at school with her will be beneficial.

“I don’t think (my brother) had a big impact on my decision,” Yuki Yoshihara said. “But I knew freshman year was going to be hard, so having him here and just helping me has been good.”

Now a senior, Hidetoshi Yoshihara has earned two collegiate victories and was named to the All-Pac-12 Second Team in each of his first two years. He said his goal for this season is to become an All-American, which is reserved for the top 65 players at the end of the year.

Yuki Yoshihara, who has competed in two tournaments this fall, said she aspires to make the starting lineup for the rest of the year.

As one sibling wraps up their collegiate career and the other begins theirs, the Yoshiharas share an opportunity to add success as Bruins to their ever-growing family trophy case.

Auh is currently a Sports staff writer. He was previously a contributor on the men's golf, women's golf and men's tennis beats.