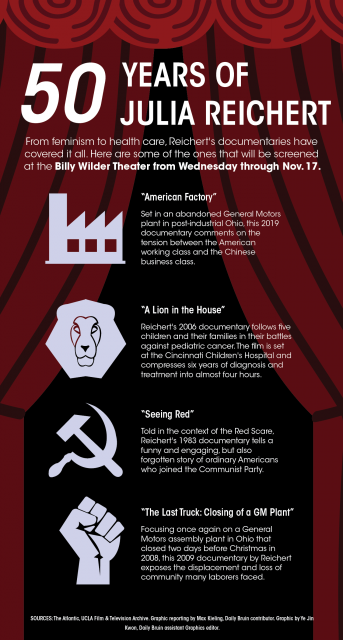 Julia Reichert’s directorial debut premiered in 1971, but she said her work is just as relevant now, if not more so, than it was before.

Reichert, an Emmy Award–winning and Academy Award-nominated producer and director, started her career with the first documentary of the 1970s women’s movement, “Growing Up Female.” Her subsequent films continued to explore social movements, particularly focusing on the fight against income inequality.

The UCLA Film & Television Archive will be honoring her work at “Julia Reichert: 50 Years in Film,” which will screen a variety of her works through Nov. 17 at the Billy Wilder Theater. The program, looking back on Reichert’s career, highlights the recurring themes and issues of women’s and workers’ rights, particularly in the Midwest.

“These films are surprisingly relevant to the whole world,” Reichert said. “The issues and movements in them connect to today.”

One such issue is seen in “The Last Truck: Closing of a GM Plant,” where the consequences of job loss in the American labor system are brought to the silver screen. The film takes place in Dayton, Ohio, Reichert’s hometown and one of the cities hit hardest by the 2008 financial crisis. It is based on a real plant in Ohio that shut down, leaving hundreds unemployed.

Economic issues frequently emerge in Reichert’s films, as she said she tends to explore class, workers and women, which are facets that cannot be torn from the economic systems of America. With a film like “The Last Truck,” audiences are able to witness how class and economic changes directly affect society at the individual level, Reichert said. Her partner in life and in film, Steve Bognar, said the choice to document a story based in Reichert’s hometown allowed them to hone in on a topic that was both timely and familiar to them.

“Not only do we pick subjects that are urgent, we pick stories that we feel qualified to tell,” Bognar said. “This is why many of our films take place in Dayton.”

Reichert and Bognar co-directed both “The Last Truck” and “American Factory,” and urgency is definitely felt in both films, said film programmer for the UCLA Film & Television Archive KJ Relth. Relth said the films that place urgency on the women’s rights movement are equally important today as they were when the films were created, if not more so. However, he said it is not only their relevance that brings these films to UCLA, but the emotional impact they carry.

“Julia Reichert and Steve Bognar remind us of the importance of empathy, and how essential it is to take time to care for those whose voices account for so much of the day-to-day labor of this nation,” Relth said.

And beyond empathy, many of the films being screened will also have the intersecting theme of justice, Bognar said. “Seeing Red” and “Union Maids,” specifically, illustrates the societal and individual tensions that occur when people fight for their rights, he said.

In addition to workers’ and women’s rights, though, Reichert also touched on Dayton’s opioid crisis in her film “Methadone: An American Way of Dealing,” which is set during the heroin epidemic of the 1970s. The film, when watched today, allows the audience to compare the past to the current, similar crisis in Ohio and draw links between the two.

For Reichert, it’s important that these issues are brought to a global audience, but she said she feels especially honored to bring them to students. And while many of Reichert’s films are set in her hometown, which has inspired her to tell her stories, Bognar said the beauty of her films is in how universal they are.

“We live in a time in which people are fighting hard against inequality,” Bognar said. “(Reichert’s) movies are lighter fluid for these fires.”