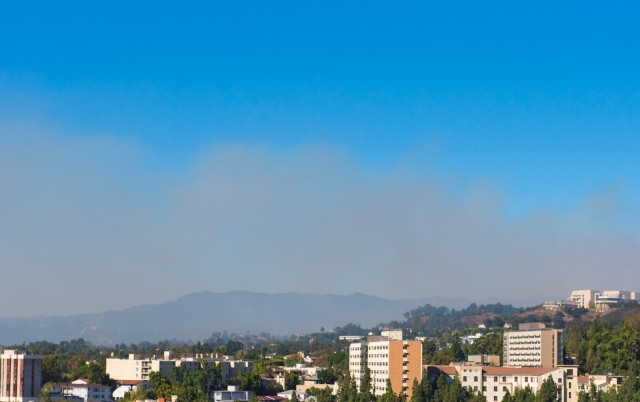 The Getty fire did not threaten campus because the wind pushed it west of the 405 Freeway. If such a blaze threatened campus, logistical problems would prevent UCLA from evacuating all students. Instead, the Los Angeles Fire Department would work to defend the campus and students would be free to self-evacuate. (Kanishka Mehra/Assistant Photo editor)

If a wildfire threatened UCLA, administrators plan to defend the campus rather than evacuate all students.

Michael Beck, administrative vice chancellor, said UCLA has an agreement with the Los Angeles Fire Department to provide sufficient resources to ensure campus safety, particularly for student housing facilities. This plan was chosen after conducting an analysis last year on how to undertake a massive evacuation, Beck added.

“There aren’t enough buses on campus, and it would take too long to get buses,” Beck said. “That’s not going to be reasonable when you are also trying to evacuate the campus population.”

Instead, students who cannot leave campus on their own would be told to go back to their dorms while LAFD attempts to protect the campus.

The still-smoldering Getty fire, which burned approximately 745 acres since it started a week ago, did not threaten the campus because it was moving west with the winds on the opposite side of the 405 Freeway, away from UCLA. However, UCLA’s response to the fire caused many to wonder what the plan would be if such a fire did threaten campus.

Although there is a general plan in place, some residential assistants said they are unfamiliar with it and some students have expressed reservations. Not all faculty are aware of evacuation procedures, Beck said.

Students are free to self-evacuate in the event a wildfire prompts an evacuation. However, that may be difficult in the initial hours of an evacuation because of significant traffic congestion, Beck said.

“We wouldn’t prohibit people from leaving,” Beck said. “We just wouldn’t en masse move 13, 14 or 15,000 people to a specific area off-campus that can house them, because there isn’t another place on campus or nearby that can house that number of students.”

If there was an immediate threat of a wildfire crossing Sunset Boulevard into the Hill area, students would be told to evacuate to the closest predetermined evacuation zone, such as Sunset Canyon Recreation Center or Drake Stadium, through BruinAlerts, RAs and residential staff, Beck said.

“The decisions are based on circumstances,” Beck said. “If the fire is right up to the dorms, we aren’t going to make people stay in the dorms.”

However, RAs are not trained in how to handle an evacuation caused by a wildfire, according to an experienced RA who wished to remain anonymous.

Although RAs are trained in how to respond to isolated building fires, they are not trained in responding to a wildfire, the RA said. In that situation, RAs must be on call and wait for their supervisors’ instructions for how to respond.

“That’s something that would come to us from our supervisors,” the RA said. “So it’s very much more of a spur of the moment … type of thing rather than something that we’re fully prepared for from the beginning. Unfortunately, that is just how it is right now.”

The RA added they think there should be more internal conversations and better communication about how RAs should respond in that situation.

“Unfortunately, a lot of times, we don’t have the answers, and we wish we did,” the RA said. “It’s just not communicated to us as much as I think it should be.”

Beck said not all faculty may know how to respond to an emergency evacuation during the day while students are in class. However, he said there are about 1,000 specially trained “wardens” throughout campus who can direct faculty and students to on-campus evacuation zones.

Students should prepare for emergencies by consulting the Bruins Safe app to read up on the emergency plans for fires, earthquakes, active shooters and more, Beck said.

Although Bruins Safe does have an emergency fire plan, it describes how to respond to an isolated building fire and not a wildfire. When asked why there is not a wildfire plan available to students, Beck said he would have his team look into potentially developing one.

“That’s a good question,” Beck said. “I think that would certainly be worth looking at. Wildfires, until recently, have not been an annual event.”

Several students expressed reservations about the plan, while one said they understood the reasoning behind it.

Joy Chen, a first-year design media arts student, said the plan made sense to her given the logistical problem of evacuating so many students.

“It kind of makes sense that they can’t evacuate all of us,” Chen said. “That’s just so many people. I feel like if the (dorms) are safe, it is a pretty sufficient option.”

Urna Bajracharya, a first-year design media arts student, said she would still be scared if she was told to stay in the dorms while a fire burned nearby.

“There is a chance that it is going to take control and then, you know, take the building down,” Bajracharya said. ”It just makes me scared that that’s a plan and that it’s not like a very safe plan.”

Tyler Yin, a first-year business economics student, said he did not understand why residents near campus would be encouraged to leave but students in residential housing should stay put.

“I get that we are on a campus but, in reality, we are all on the same land and it all still burns the same, so it’s not like a wall of firetrucks is going to save us more than it’s going to save any other block in the city,” Yin said. “So for me, I don’t think it’s as safe as we’d like to think.”

Bilbao was the Assistant News editor for City and Crime from 2019-2020. He graduated with a degree in political science student and previously worked as a News contributor for Features and Student Life.