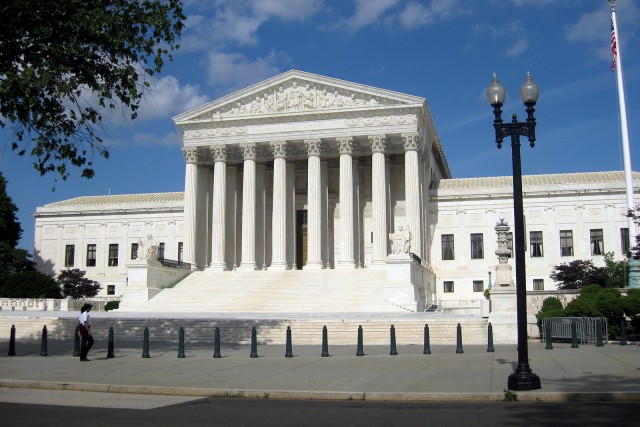 The University of California was the first institution to file a lawsuit against President Donald Trump’s administration after the administration announced it was ending the DACA program in 2017. That lawsuit is now being heard by the Supreme Court. (Creative Commons courtesy of Wally Gobetz via Flickr)

The Supreme Court began hearings for the University of California’s case against the repeal of the Deferred Action for Childhood Arrivals program on Tuesday.

The DACA program was an executive action issued by former President Barack Obama in 2012 to defer deportation for undocumented individuals who arrived to the country as children and to allow them to obtain work permits, college degrees and driver’s licenses.

President Donald Trump’s administration first announced it was ending the program in September 2017. The University of California was the first institution to file a lawsuit against the administration in response to the news. That lawsuit is now in the hands of the Supreme Court.

UC President Janet Napolitano said in a teleconference she thinks the court’s decision will have a profound impact on the nation’s over 700,000 DACA recipients, 1,700 of which are UC students.

“These young people have earned admission to the University of California,” she said. “To remove their DACA protection in the way the Trump administration has attempted to do, and subject them to eviction to the only country they know as home, is not only not legally required, but inconsistent with good immigration policy and our values.”

Napolitano, who was the Secretary for Homeland Security under Obama, played a large role in establishing the DACA program. During Napolitano’s time as secretary, the department broke records each year for the number of immigrants deported. In 2012, the year before she left the position, 419,000 people were deported.

Although the court heard arguments Tuesday, it has until the end of June 2020 to issue decisions on all cases heard this term, said California Attorney General Xavier Becerra in the teleconference.

Solicitor General Noel Francisco, arguing for the Trump administration, said that even if the program has legal basis, the Department of Homeland Security has a right to terminate it, according to the Washington Post.

Napolitano said some of the justices indicated their support for the DACA program during Tuesday’s proceedings. During the proceedings, Justice Stephen Breyer tallied all the businesses, educational institutions and religious organizations who have filed against the Trump administration’s decision, including the UC.

Breyer made the argument that not only do DACA recipients rely on the policy, but so do all these institutions. Napolitano said Justice Sonia Sotomayor commented on the social issues involved and urged her fellow justices not to let reasons offered by the administration overcome the legality of the program and the decision.

Becerra said he thinks two points stood out from this particular case.

Trump tweeted Tuesday morning regarding DACA recipients. Trump said in the tweet that some people with DACA were criminals. However, an individual is only eligible to receive DACA if they have no criminal history.

Block said in the email that ending DACA would cause many students to lose valuable resources and would reduce their opportunities to contribute to their families and communities.

Valenzuela, who is also the Special Advisor to the Chancellor on Immigration Policy, told the Daily Bruin that UCLA has been taking additional steps to prepare for a decision against the UC.

“Our campus is taking a conservative approach,” he said. “We are preparing like the court will uphold Trump’s executive order. … We don’t want to be caught unprepared.”

Valenzuela added if Trump’s repeal of DACA is upheld, hundreds of students will lose their protected status. He said UCLA plans to develop programs so these students can finish their education at UCLA.

Karla Martinez, a fourth-year political science student, said the DACA program is the reason she can attend UCLA and travel around the country for conferences and for her career.

“Under the DACA program, I have been fortunate to be able to accept paid positions both in Los Angeles and Washington, D.C.,” she said. “DACA has allowed me to be able to think about the possibility of pursuing my master’s (degree), something I never thought I would do prior to DACA.”

Martinez added she thinks other undocumented immigrants who are not eligible for DACA deserve to be part of the conversation.

“I hope that the Supreme Court decision will not only favor the individuals under DACA, but open up the conversation towards the undocumented immigrants who do not have DACA or any other sort of safety net,” she said. “I am hopeful, but I know we can do more.”

Valenzuela said he thinks some responsibility falls on the state and federal legislatures to address failures in the country’s immigration system.

“There’s always hope Congress will get its act together … but we are not in the position to wait because the federal government has disappointed us in the past,” Valenzuela said.

UCLA is the only UC campus with a specific chancellor’s advisory council on immigration that is working with the state legislature and the governor’s office, Valenzuela added.

“We have a really progressive and thoughtful legislature and a thoughtful governor who enhances students’ success with specific legislation earmarked for undocumented students,” he said.

Napolitano said until a decision is released the UC will continue to operate student service centers for undocumented students, provide free legal services and encourage DACA students to continue re-enrolling in the program.

Valenzuela said he is hopeful about the work the state government and UCLA specifically has done to protect undocumented students.

“It’s good to be from California,” he said.