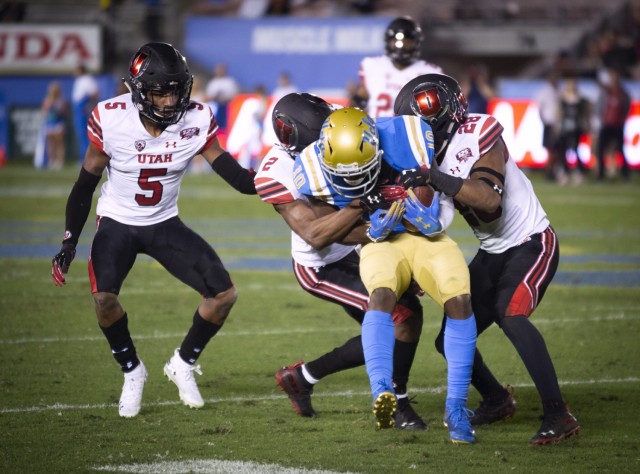 No. 7 Utah is the highest-ranked opponent UCLA football has played since week three and is one of two Pac-12 programs ranked inside the top 10 in the College Football Playoff Rankings. (MacKenzie Coffman/Daily Bruin senior staff)

UCLA football (4-5, 4-2 Pac-12) will face its highest-ranked opponent of the Pac-12 season in No. 7 Utah (8-1, 5-1 Pac-12) on Saturday. The matchup between the Bruins and Utes has major implications on the hierarchy of the division down the stretch. So, Daily Bruin Sports and The Daily Utah Chronicle, Utah’s student paper, decided to break down the biggest storylines ahead of the game.

Daily Bruin: Which running back do you think will have the bigger day Saturday, redshirt senior Joshua Kelley or Zack Moss?

Sammy Mora: Zack Moss has been, hands down, one of the best spots in Utah’s offense this year. … There’s something about him rushing at home that makes him play much better. I expect both teams to have a good rush game, but Utah has only had one team rush for over 100 yards against them this season – that was Arizona State with Eno Benjamin. The Utah run defense is so stout that they’re keeping running backs to minimal yards the entire game. So I want to go with Moss just because I know what the Utah defensive line can do. … Probably, Kelley will have a tough time getting stuff through on Saturday.

DB: Sophomore quarterback Dorian Thompson-Robinson has demonstrated his ability as a dual-threat during Pac-12 play this season. Do you think Utah will be able to slow him down and contain him inside the pocket?

SM: Yeah, I think they will. If you look at what the Utah defense did against (Arizona State quarterback) Jayden Daniels – who is also quite a mobile quarterback – they were able to get him trapped in the pocket, and then when he did get flushed out of the pocket, there was someone there to bring him down. So I think if the defense can play the way they played against Arizona State, (Thompson-Robinson) won’t have a mobile game.

DB: The Utes are forcing roughly two turnovers per game. Do you think they’ll be able to do that this week?

SM: If the Utah defense can put (Thompson-Robinson) into those bad situations, where he’s forced to make those risky throws, Utah’s secondary is going to come down a bit. Jaylon Johnson, Julian Blackmon, Terrell Burgess – the secondary is so good at finding balls and picking them out of the air. You can even go back to our linebackers. Francis Bernard has a couple interceptions on the year, so does Devin Lloyd. So, I think that if the defensive line and even the linebackers can force (Thompson-Robinson) into making these not-smart throws, the defense will have some interceptions on Saturday.

DB: Is there any kind of foreboding feeling around this team, considering Utah has had some pretty disappointing late-season collapses over the past few years?

SM: I think the team’s expectations are right where they want to be. (Quarterback) Tyler Huntley said at practice on Monday that they have to prove to the College Football Playoff – as well to everybody – that they deserve to be where they’re at. This team is so focused and so driven that I think – since last year they did make it to the Pac-12 championship and they got that taste in their mouth of what it’s like – they don’t want to let it go. (Utah) had multiple juniors come back for their senior year because they wanted to get a championship. And I think that this year, the culture on campus is a lot different – a lot of people aren’t getting overexcited. The goal is to be 1-0 every single week, and I think the team, as well as fans, are doing a really good job at making sure that stays true and keeping it in their head, not jumping ahead too much.

DB: What’s your prediction for the final score?