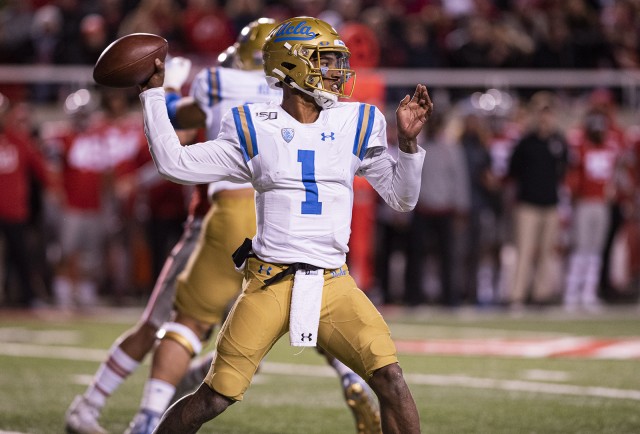 Sophomore quarterback Dorian Thompson-Robinson turned the ball over twice in the first half of UCLA football’s matchup with No. 7 Utah. Thompson-Robinson passed for 123 yards on 12-of-21 passing. (Kanishka Mehra/Assistant Photo editor)

SALT LAKE CITY – The Bruins had opportunities early, but a slew of costly mistakes have them staring up out of a deep hole.

After opening the game with a near-seven-minute drive that had the Bruins within four yards of the end zone, sophomore quarterback Dorian Thompson-Robinson took sacks on back-to-back plays, forcing UCLA to settle for a field goal and an early 3-0 lead.

The Utes responded with a long drive of their own, converting on three separate third-downs of five or more yards. After failing to get off the field, quarterback Tyler Huntley capped the drive off with a 2-yard rushing touchdown after slipping past a pair of Bruin defenders.

On the ensuing drive, Thompson-Robinson – who finished the half with 123 yards on 12-of-21 passing – danced around in the pocket and found redshirt freshman wide receiver Kyle Philips for a 39-yard gain on 3rd-and-8 to move the Bruins right back into Utes’ territory.

The drive ended three plays later after Thompson-Robinson sailed a pass into the end zone for an interception on third-and-long, but UCLA got the ball back on the next play thanks to a Utah fumble.

The Bruins came up empty again, however, when senior kicker JJ Molson missed a 42-yard field goal wide right after the offense failed to move the ball downfield.

After leaving three points on the board, UCLA surrendered 21 unanswered points to close the half.

Running back Zack Moss led the late charge for Utah, racking up 116 yards on the ground and 65 through the air. He also added two more rushing touchdowns to his already Pac-12-leading total which now stands at 13.

Moss and the Utes will receive the ball to begin the second half.