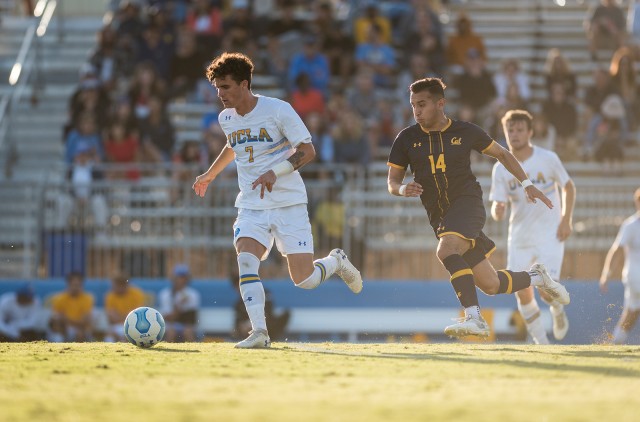 Sophomore midfielder Cody Sundquist tallied UCLA men's soccer's only goal in its 1-0 shutout over San Diego State on Saturday. Sundquist's goal was his second of the season, after tallying a goal against CSUN on Sept. 15. (Liz Ketcham/Photo editor)

Almost 88 minutes into the match, the Bruins had taken 11 shots – none of which found the back of the net. But in the final minutes, they finally broke through.

The score remained locked at zero until sophomore midfielder Cody Sundquist met a cross from redshirt senior forward Blayne Martinez on the back post and knocked it in from point-blank range to give the Bruins the lead with two minutes and one second remaining in the game.

“I think everyone knew the goal was coming, it was just a matter of when,” Sundquist said. “It was a good moment and credit to our team because I didn’t have to do much. They kind of did everything for me.”

UCLA held possession for much of the game, with San Diego State threatening on the counterattack. However, the Aztecs only managed two shots on goal the entire game, with sophomore goalkeeper Justin Garces saving both.

One of those saves came in the sixth minute from a driven free kick from distance. Garces slid across early to catch the ball heading toward the upper corner of the goal frame.

For the remainder of the half, UCLA had several chances to score, mostly coming from junior forward Milan Iloski, who is tied for first in goals scored in the NCAA and led the team with four shots in the game.

In the 29th minute, the Bruins lofted a long ball toward the Aztecs’ backline. A San Diego State header in an attempt to clear the ball ended up deflecting off Iloski.

When Iloski looked up, he found himself with the ball behind the backline one on one with the San Diego State goalkeeper Max Watkin.

Iloski was tripped up from behind as he went to shoot inside the box, resulting in a penalty kick – which was saved by Watkin. Iloski was stopped one more time before the half ended as a strike destined for the back post was saved by an advancing Watkin.

The second half got heated when several UCLA bodies collided with Watkin on a cross, sparking a brief scuffle among most of the players on the field and resulting in a yellow card for Iloski.

“The games are always like that when we play them,” Sundquist said. “Stuff like that happens because both teams are trying to win, and obviously we were trying to push for the goal and tempers were flaring.”

The Bruins continued to have chances as they finished with three more shots on goal compared to the Aztecs, despite an equal shot total. San Diego State had a chance of getting its own goal in the 88th minute, when midfielder Reagan Sherlock struck a curling ball that sailed just over the upper right bar.

But later in the minute, UCLA converted one of its opportunities and concluded the 2019 season with a conference victory.

“We wanted to go and give these seniors an opportunity to win on the last night and for the guys to go and compete,” said coach Ryan Jorden. “I think the guys did that.”

Lieber is currently a Sports contributor. He was previously a contributor on the men's soccer and men's and women's golf beats.