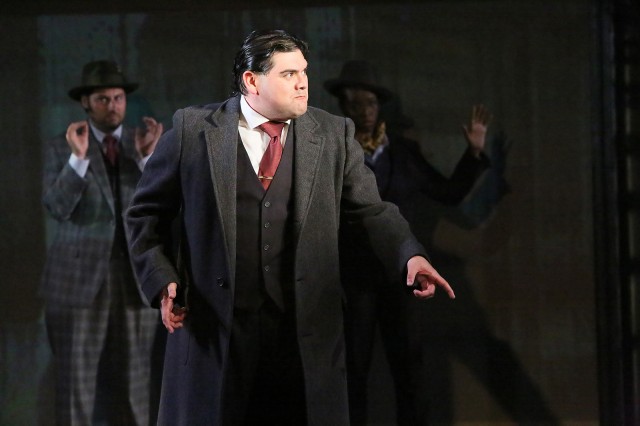 "The Resistible Rise of Arturo Ui"

Playwright Bertolt Brecht mimicked the tactics of early Nazis in his gangster play, but UCLA cast members grounded their characters in modern-day parallels.

“The Resistible Rise of Arturo Ui” was written in 1941 in Germany as an allegory for Hitler’s rise to power and follows gangster Arturo Ui’s treacherous ascent to becoming head of a Chicago cauliflower mob. The play will run Nov. 15 through Nov. 23. in Macgowan Hall’s Little Theater. Lead actor Robert Arriaga, a third-year theater student, said that while every character and scene is modeled after historical counterparts of 1930s Germany, many of its themes resonate with the tension found in modern American politics.

“This piece of ‘Arturo Ui’ – while it’s associated with the rise of Hitler – I’m actually seeing it as it’s happening now,” Arriaga said.

As a first-generation American whose parents immigrated from Mexico, Arriaga said he couldn’t help but notice how his character – the play’s Chicago counterpart to Adolf Hitler – uses rhetoric similar to U.S. Immigration and Customs Enforcement’s justifications for detaining children at the Mexican border. After witnessing how quickly prejudicial ideals can rise to power in this play, Arriaga said he fears what ignorance toward the treatment of Mexican immigrants could turn into.

Such lack of consciousness is what enabled the fictional Arturo to rise to power, but third-year theater student Michael Bauer said his character, Giuseppe Givola, was instrumental in swaying the public’s perception. Giuseppe, based on Hitler’s Minister of Propaganda Joseph Goebbels, spins public perception of Arturo’s actions to be seen in the most acceptable light. Despite being written over 70 years ago, Bauer said the production’s social relevance is heavily palpable because of the current state of American politics.

“(The play) is a story of how a demagogue rises to power through the apathy of a public who keeps passing the buck down the road,” Bauer said. “‘Oh, the next town will step up to him,’ or, ‘The next generation will vote them out,’ and then they don’t. If we ignore things, it’ll get worse.”

Among arson, blackmail and violence, Arriaga said the story of Arturo’s success is steeped in cruelty. So, to avoiding berating the audience with an overwhelmingly morose atmosphere, director Angela Scott said the playwright added vaudevillian and clownish elements, providing audiences some intermittent relief from the often dark themes. A fourth wall-breaking musical number and an ironic, classical prologue are such elements that balance the play’s darker material with more lighthearted, tongue-in-cheek moments, Bauer said.

In addition to added elements of humor, Scott said Brecht drew from 1930s Chicago gangster films to make the show more palatable to universal audiences since the genre was popular at the time. By instituting the gangster tropes of rivaling mob heads and a hierarchical structure, the extended Nazi metaphor is presented in a familiar – and thus readily understandable – format. Even though the warning of Hitler’s rise is wrapped in the guise of a mobster story, Bauer said the parallels between the mob world and Nazi politics are made abundantly clear.

“The business of a mobster is to identify a weakness and exploit it. … I think it’s the same with Nazi Germany,” Bauer said. “Let me find a weakness, find xenophobia, find a foreigner, and let me exploit that and turn (it) into my political gain.”

But outside the world of the production, Arriaga said the warnings of prejudice and false rhetoric conveyed in the play articulate the fear of modern politicians felt by himself and his peers. When it came to sources of character inspiration, Bauer and Arriaga chose President Donald Trump and Vice President Mike Pence, respectively, as the basis for their 1930s roles. So while the play is explicitly based on historical events, Arriaga said its message still rings true for the modern day.

“As long as people understand that it’s not just a play,” Arriaga said. “These are events that happened before, and they can happen again.”