Second Take: Taylor Swift’s fight for masters rights is a battle artists know all too well 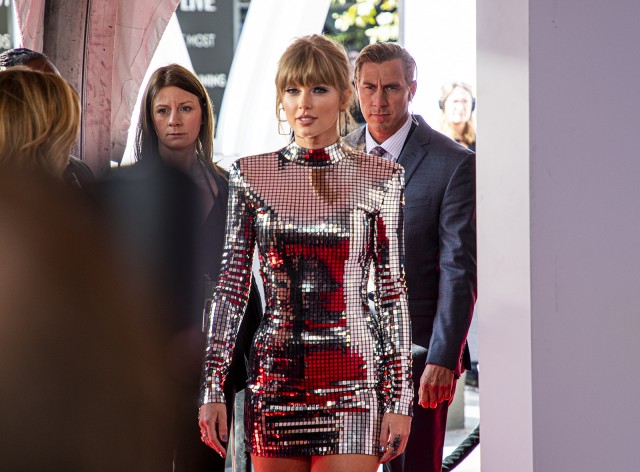 Taylor Swift has engaged in a public feud with Big Machine Label Group, her previous record label, over the right to perform her own music at the American Music Awards. Her feud, taken to the Twitter stage, reveals structural imbalances present in the music industry. (Kristie-Valerie Hoang/Daily Bruin senior staff)

Swift’s latest public showdown with her former record label Big Machine Label Group centers on her upcoming American Music Awards performance, where she will receive the Artist of the Decade award. On Thursday, Swift alleged that Big Machine had barred her from performing any of her old catalogue in her planned medley. Despite ongoing confusion about the complex dispute and resolution, Swift’s public fight sheds light on the music industry’s massive structural imbalance and illuminates a larger conversation about artists’ agency in the work they create.

Swift’s showdown with Big Machine first began June 30, when the label’s co-founder Scott Borchetta announced that it had been acquired by a group of investors led by producer Scooter Braun for reportedly over $300 million. After the news was made public, Swift posted an impassioned statement on Tumblr, calling the sale her “worst case scenario,” as it transferred control of her master recordings to Braun. Now, Braun controls the masters, or the original recordings, and rights to their use, whether that’s allowing songs to be available on streaming platforms or licensing them for a movie.

From there, the facts became murky. Swift alleged that Big Machine never offered her the opportunity to buy the company or her masters. Instead, it offered her a deal in which she would earn her tracks back, album by album, for every new album she produced under the label. Borchetta denied this claim, and said the deal was for 10 more years with Big Machine.

Another key nuance to the dispute is Swift’s contentious relationship with Braun because of what she deemed in her initial post as “incessant, manipulative bullying” at his hands. Braun manages several main artists, but Swift was affected by his work with Kanye West, who has infamously and insidiously battled with Swift throughout her career.

Bringing the issues to a head is Swift’s upcoming performance at the AMAs. In theory, because Big Machine owns only the masters and not the original songs, Swift should be free to perform them despite their ownership. However, some experts have theorized that the postshow streaming of Swift’s performance could constitute as a rerecording – something she won’t be allowed to do until November 2020, when her contract with Big Machine expires.

But the AMA debate is characterized by the same confusion as the initial summer scuffle. In a statement released Monday, Big Machine said its artists don’t need to seek approval for live performances, contradicting Swift’s initial statement. Big Machine also contended that it had reached an agreement about streaming and rebroadcast licensing with AMA producers, who quickly refuted the claim. At print, the fate of Swift’s AMA medley remains unclear.

All of these conflicting claims and perspectives obfuscate the issues at hand, especially because the contractual terms are highly technical and complex in and of themselves. However, the biggest obstacle to understanding the ongoing fight is the lack of information being revealed to the public, all of which is coming from Swift, Borchetta and Braun – not exactly unbiased parties in the matter.

However, what is clear is the troubling historical legacy of this problem that impacts artists regardless of their levels of fame. Many labels retain the rights to the masters of their artists – Ariana Grande and Beyoncé, arguably the biggest female musicians beside Swift, don’t own their masters. Titans of music including Prince and the Beatles publicly fought with their record labels for their masters, and weren’t able to recover them until 2014 and 2017 respectively.

Young up-and-coming musicians are particularly vulnerable to such agreements – Swift signed with Big Machine as a teenager, and her case is in no way unique. The massive power imbalance allows domineering companies to use the promise of exposure to retain control over the artists’ work with little recourse for anyone who wants to regain autonomy after achieving success.

Swift’s professed desire to help young artists is key to understanding her tactics. Some have characterized Swift’s social media posts to be punitive or bullying, based on the perception that Swift used her fan support to wreak havoc. However, Swift’s ubiquity is precisely what makes her the perfect figure to wage this war against her label – a fight that many musicians of smaller status have been fighting with little media coverage or support.

Swift has been able to leverage her position in the music industry, for her personal benefit but also in a public way that raises the profile of the issue. The duality of the fight mirrors Swift’s previous involvement in a sexual assault lawsuit – she sued for damages of a single dollar, underlining that the case was about awareness rather than personal gain or restitution. While it may be easy to posit that her social media posts have been purely strategic, Swift is using her platform to bring visibility to the inner workings of the music industry that are often obscured from public view.

Even the biggest musicians can end up with their lives’ work in someone else’s hands, but Swift’s fight for her musical legacy serves as both a cautionary tale and a lesson in defiance for future artists who hope to establish a balance of power in the music industry.