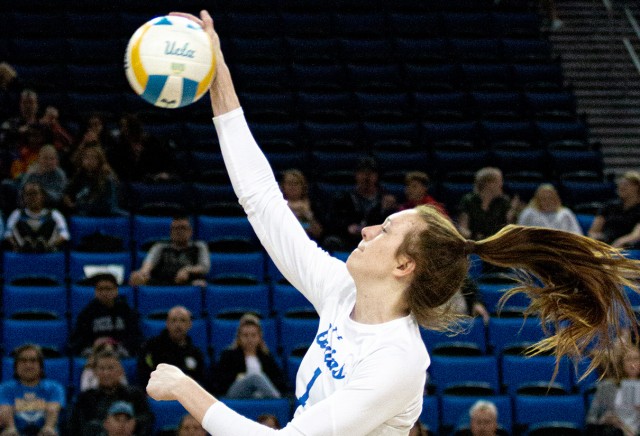 The Bruins are killing it on the court.

Sixty-five percent of the points scored by the Bruins this weekend and about 80.5% of their points this season have come by way of the kill. This high percentage of kills can be attributed to the aggressive style of play that UCLA typically utilizes, said redshirt sophomore middle blocker Emily Ryan.

“Being aggressive is very important (for UCLA),” Ryan said. “Especially since we are an offensive team and playing many ranked opponents.”

“I think that when (May is) on serve, I’m doing everything I can to get balls so that she can keep taking shots,” Simo said. “I think that we just are really tight, great communicators and she’s a great player. If we can just stay confident in each other and get balls, it will be really good for the team.”

Despite UCLA’s ability to out-kill its opponents, the same cannot be said for the block battle. The Bruins are ranked 11th in the Pac-12 in total blocks this season, something that has proven to be detrimental when playing highly ranked teams. In their nine losses this season to ranked opponents, the Bruins were out-blocked in every match.

UCLA had a total of 10 blocks over the weekend, seven fewer than its opponents combined for. However, coach Michael Sealy does not view the struggles with blocking as a major issue for the Bruins, since it is not their style of play.

“We have never been a blocking team,” said Sealy. “(Momentum and kills) are very important – obviously everything helps when playing tough opponents.”

With its most recent game being a sweep by Stanford, UCLA is going into Friday’s game against Oregon (7-18, 3-13) on a one-game losing streak. When the Bruins played the Ducks on Oct. 18, they lost in three sets with only 40 kills.

However, UCLA has the advantage in kills per set, recording an average of 1.25 more kills per set than Oregon.

The Bruins only have four matches left and need to win at least one to qualify for the NCAA finals tournament in December.