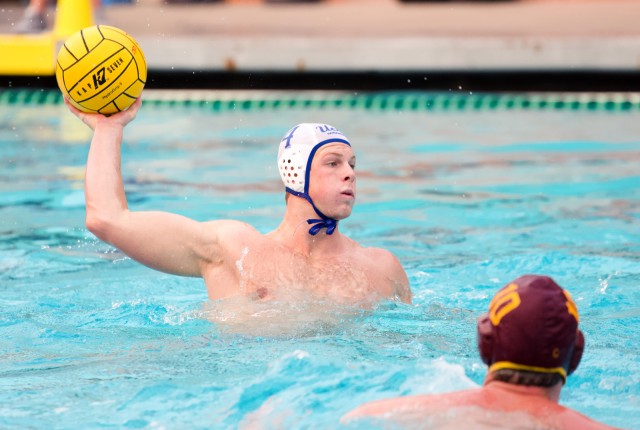 Sophomore attacker Jake Cavano is second on UCLA men's water polo in goals with 34 heading into the MPSF tournament, where the No. 3-seeded Bruins will take on Penn State Behrend Friday at 1 p.m. for a chance to play No. 2 seed Stanford in Satuday's semifinals. (Alice Naland/Daily Bruin staff)

The Bruins will head to Berkeley to compete in the MPSF Championships this weekend.

With UCLA’s most recent regular season losses being to tied No. 1 USC and No. 1 Stanford, junior attacker Nicolas Saveljic said the team has been working on team dynamics and learning from what went wrong in those games.

“From the first possession, we need to bring the energy,” Saveljic said. “It’s very important how we open the match and the energy that we bring for the first game.”

In the game against USC, Saveljic put up three of the seven Bruin goals, and against Stanford, he was one of three players to register two goals.

In that case, the decision will sit with the NCAA Men’s Water Polo Committee to give the Bruins a shot at a title.

With two spots available, sophomore attacker/utility Jake Cavano said the team has been watching film and preparing to face each of the teams.

“We’ve been looking at a lot of plays from each of the teams that we have already faced,” Cavano said. “We have been really trying our hardest to mimic various plays as much as possible (in practice).”

Both Cavano and coach Adam Wright specifically noted that the team has been working hard on its front court attack, making sure that the players are ready to get quality shots when on offense.

“We really haven’t established a really good front court in the past couple of games,” Wright said. “Without that, it puts their team in a really good position for their counter attack. We have concentrated on our front court, transition and our zone defense this week.”

In 2018, the MPSFs sent three teams to the NCAAs – USC, Stanford and UCLA – and in 2017, UCLA faced USC in the finals of the NCAAs, defeating the Trojans 7-5, to clinch the program’s 11th national title.

A team from the MPSF has won the national championship every year since the conference’s formation in 1992.

And in this year’s MPSF Championship, the two teams above the Bruins – the Trojans and Cardinal – have first round byes, making their first game on Saturday against the winners of Friday’s games.

In preparation to face some of these teams that have handed losses to UCLA, Wright said the majority of the week has been spent on working on the team.

“We’re still a team that has been growing a lot,” Wright said. “The nice part about this is that the last three weeks, we have played Cal, USC and Stanford, so we could train from those teams and what they have done.”