By Claire Britton and Kyle Boal 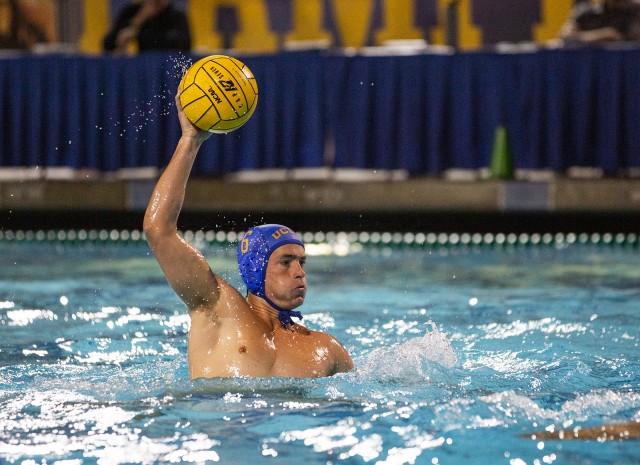 Freshman attacker Andy Rodgers was one of only three Bruins to score in the MPSF tournament third-place game, in which No. 3 seed UCLA men’s water polo lost to No. 1 seed USC 10-6. Rodgers also scored two goals in the semifinal, in which UCLA lost 16-15 in overtime to No. 2 seed Stanford. (Amy Dixon/Daily Bruin senior staff)

The Bruins finished in fourth place this weekend at the Mountain Pacific Sports Federation championship.

The last time the Bruins saw the Trojans in the regular season was earlier this month, when they lost 10-7.

“They played really well today,” said sophomore attacker/utility Jake Cavano. “We didn’t counter all the way or have good structure. On defense, we were letting the ball swing too much.”

At the end of the second period, the score was 6-3, with two goals from freshman attacker Andy Rodgers and Cavano.

At the end of the game, the Bruins had only doubled that score to make six, with another goal from Cavano and two from junior attacker Nicolas Saveljic.

Each score brought UCLA to within two scores of USC, but each time the Trojans would answer to extend the lead to three, the last time coming when senior Matt Maier scored with 4 minutes, 23 seconds left in the fourth to extend the Trojan lead to 9-6.

Of the three players who scored goals for UCLA, Rodgers took nine shots, more than any other player in the game. Out of 10 opportunities to score in 6-on-5 situations, UCLA only converted on two, plus a penalty shot from Saveljic in the third quarter.

“I just look to attack the goal whenever I touch the ball,” Rodgers said. “That is something we have been trying to focus on more. We’ve been passive in attacking the goal and letting their goalie be comfortable when we are moving the ball around the perimeter.”

After this weekend’s tournament, UCLA’s spot in the NCAA tournament is still in question. UCLA will not receive the automatic bid from the MPSF – which goes to conference tournament champion Stanford – and with two at-large bids available, the NCAA Men’s Water Polo Committee will decide if the Bruins deserve a shot at the national title.

The Bruins came up short in their first overtime match of the season.

No. 3 seed UCLA lost in overtime to No. 2 seed Stanford 16-15 in the semifinal of the MPSF tournament. The loss marks the Bruins’ fourth straight loss to the Cardinal, and the third this season.

UCLA went into the half with an 8-6 lead, but after Stanford outscored UCLA 6-2 in the third quarter, the Bruins mounted a fourth-quarter comeback to send the game to overtime.
With just 42 seconds left in regulation, sophomore attacker Ashworth Molthen tied the game at 14 on a powerplay.

Overtime, consisting of two three-minute periods, saw the Cardinal jump to a quick 15-14 lead after a goal just 38 seconds into the first overtime period. Stanford scored again, going into the second overtime period with a 16-14 lead over UCLA.

The Bruins did not convert another scoring opportunity until junior attacker Nicolas Saveljic scored his fifth goal of the match with just four seconds remaining in the second overtime period.

The Bruins had all but one active field player score against the Nittany Lions. Freshman center Gabe Discipulo led UCLA’s scoring with five goals on seven shots. Sophomore and freshman attackers Jake Cavano and Max Berg, respectively, each finished with four goals on four shots.