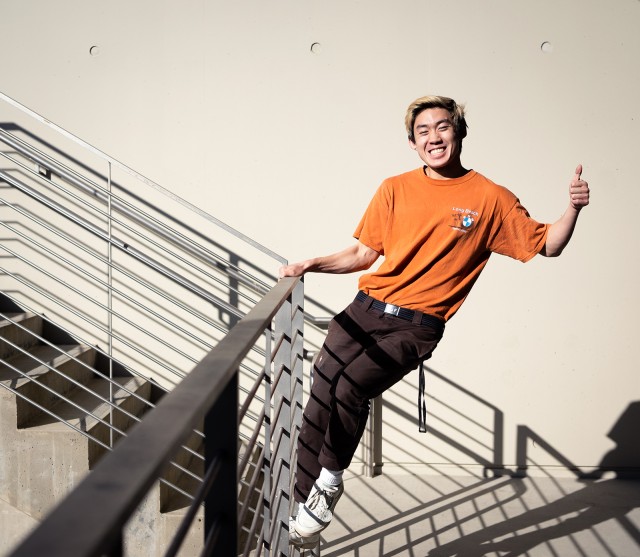 The fourth-year art student has been studying photography and painting since junior year of high school, but said he only recently made a switch to 3D modeling and rendering for more creative freedom. Despite being fairly new to the medium of digital modeling and animation pieces, Han said he now prefers it, displaying his work on his website.

“I was working on a project when I realized I couldn’t build it in real life, so I made it on a computer,” Han said. “Working with 3D modeling offered me more creative space than photography or painting.”

It’s much easier building 3D models of things rather than building them in real life, said Han. Besides teaching himself through online tutorials, Han said taking classes with the UCLA Department of Design Media Arts has helped him explore 3D rendering. Han said having knowledge in both more traditional art and digital art was especially helpful in balancing the futuristic abilities of rendering and his classical approach to art theory.

While taking 3D modeling classes Han said he learned through hands-on experiences, such as modeling a virtual reality immersive environment. Han said the course “Introduction to Virtual Reality” helped mature his understanding of the new art form by both honing his skills and exposing him to a larger community of 3D creators.

“The DESMA classes were more pragmatic and better acquainted me with 3D rendering,” Han said. “But the fine arts department’s in-depth approach to critique and theory really contributed to building my foundational understanding of fine art.”

Han’s pieces showcase his journey to find a balance between his fine arts education and gravitation toward a more modern appearance. “Tamagotchi” – Han’s first 3D rendering project – combines the vintage feel of the pocket pets with vibrant colors and a modern appearance, he said. By merging his fine arts critique with the experimental and modernistic medium of 3D rendering, Han said he created a project that was able to convey more powerful and abstract ideas through the surreal effect created, allowing him to explore somber topics.

“I wanted to talk about how simulated pets raise discussion about life and how we perceive it, and I realized the best method was through 3D rendering,” Han said. “I’m still exploring my specific interests in rendering, but I’m drawn to more personal projects.”

“(Han’s) aesthetic draws from a lot of influences in video game culture and pop culture,” Fang said. “He especially likes using bright colors, and I think he has a unique eye for using colors to evoke emotion in his pieces.”

Looking through the pieces on his website, Han said his sensitivity to color and emotion comes from a strong fine arts background and years of training in sketching and painting. Han said he hopes to further develop his abilities in 3D modeling as well as cultivate his overall artistic skill to pursue his goal of working in a small creative studio.

For his current DESMA class, he created “Hair Personalities.” Han said the 3D modeling enabled him to explore the expression of self through appearance by employing geometric shapes and his signature bright colors in designing hair styles.

“I used to follow him for his photography, but it’s aesthetically refreshing to come across his 3D modeling work,” Qiu said. “Both the medium and his style of shapes and colors make his works look very trendy, and sometimes it’s a breath of fresh air to see someone so willing to explore new artistic possibilities.”

Despite only rendering for a year, Han has already been creating models for commissions, such as his project for the KTOWN Night Market with creative house Petiteoki. Han says he hopes to explore the medium professionally and as a personal creative outlet, and considers the possibilities of 3D modeling as a form of fine art. In doing so, he said he will uncover the possibilities the modern technological medium offers for expression.

“Coming out of a fine arts program that values individuality, I feel a lot of pressure in creating original, meaningful pieces, but I’m still searching for answers,” Han said. “Now, I think not having answers and solutions to bigger questions is part of being an artist, and it’s something I’m learning to make peace (with) through exploring my work and ideas.”