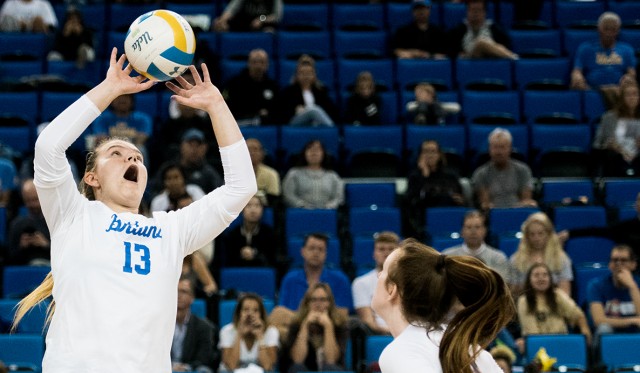 With postseason eligibility secured for UCLA women's volleyball, senior setter Cali Thompson said she and the Bruins are focusing on bigger goals than their rivalry with USC heading into the final matches of the season. (Liz Ketcham/Photo editor)

The Bruins’ regular season is coming to an end.

This will be the Bruins’ first time seeing the Wildcats this year, one of two Pac-12 opponents they face only once this season.

Arizona currently ranks ninth in the Pac-12 but is coming off a 3-1 upset over then-No. 22 Washington State on Sunday – its only victory over a ranked team this season. Prior to that game, the Wildcats had only defeated the three Pac-12 teams ranked beneath them – Colorado, Oregon and Oregon State.

UCLA swept Arizona at home last season but was then swept in Tucson five weeks later amidst a three-game losing streak that ended its season.

“Going into the last two games, with the Thanksgiving holiday and the travel and the mandatory days off – we actually have two matches next week and zero practices,” Sealy said. “We only have two more opportunities to keep working on our stuff, so it’s important that we focus on working our side of the net.”

Friday’s match will mark the second year in a row that UCLA will face crosstown rival USC in its season finale, after the Bruins played the Trojans at home last year to wrap up the season. That game, which was the Bruins’ Senior Day, resulted in USC defeating UCLA in five sets and knocking the Bruins out of postseason contention.

This year, the Bruins head into the game against the Trojans with postseason eligibility secured, having hit the .500 record benchmark against the Ducks last week.

UCLA also boasts a win over then-No. 25 USC earlier this season, as the Bruins defeated the Trojans in a five-set match to earn their first win over a ranked opponent this year.

Although UCLA recorded 12 fewer kills than USC in that game, the Trojans had a season-high 19 service errors and eight reception errors, which accounted for over a quarter of the Bruins’ points.

USC dropped out of the national polls following that game and hasn’t been ranked since.

Junior outside hitter Mac May, who had 13 kills in the first USC game, said that picking up wins as the team gets closer and closer to a possible postseason run is vital to end the season on a high note.

“I think we just got to keep racking up these wins as we get into the postseason,” May said. “A win against USC would be a great way to end the season, so hopefully we’ll continue to ball out.”

Despite the circumstances of last year’s finale defeat, Sealy said the Bruins aren’t focused on the rivalry with the Trojans but are concentrated on the bigger picture.

“I don’t think we’re gonna get up or down based on a rivalry game,” Sealy said. “I think we just know we need to play our game.”

Senior setter Cali Thompson, who led UCLA with 32 assists in the first USC match, agreed the team was focused on bigger goals than merely defeating the Trojans.

“No matter who they have on the other side they’re just a bunch of T-shirts,” Thompson said.

Wednesday’s game against Arizona will begin at 1 p.m., and Friday’s match against USC will be at 7 p.m.