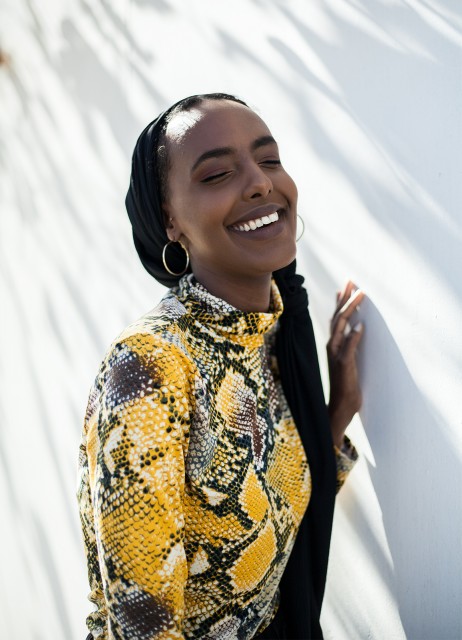 Amal Dalmar, who was once a law student at University of California Hastings School of Law, is currently a freelance video producer at BuzzFeed. Dalmar is also running her own YouTube channel on the side. (Mia Kayser/Daily Bruin staff)

Hollywood has never been so accessible for Muslim creators.

Los Angeles is the go-to spot for fostering creativity and making it big – and it’s also home to dozens of promising Muslim artists who’re breaking into the industry and redefining what it means to be Muslim. Follow columnist Umber Bhatti as she covers local creators and discovers how they plan to make their mark on the city.

The day after Amal Dalmar turned in her dissertation for law school, she became a junior video fellow at BuzzFeed.

After begrudgingly finishing law school, Dalmar said she was ready to pursue a career she was passionate about. Currently, she runs her own YouTube channel and is a freelance video producer at BuzzFeed. But the switch was not as abrupt as some may think, as her former law school classmate Paola Tobias said Dalmar has always been a great storyteller, evident in her time at law school. Tobias currently helps Dalmar manage her social media content and urged Dalmar to get into vlogging years ago.

“(Dalmar) got onto moot court and she was one of (University of California Hastings College of the Law’s) top people,” Tobias said. “She’s such a great orator you forget she’s arguing because she does it so graciously. I remember telling her, ‘You should do a storytime video on YouTube.’”

But Dalmar said she never considered working in media when she was growing up. As a teen, she was always giving her friends advice, leading her to apply to college for psychology. That all changed in 2008 after an Israeli attack on Gaza resulted in hundreds of casualties, causing Dalmar to reconsider career paths.

Dalmar said she was constantly organizing at her high school, revamping the Muslim Student Association and even opening a prayer room for students. Her interest in social justice, politics and activism led her to switch her major to international relations and affairs, and she got into UC San Diego. But prior to the start of the school year, Dalmar enrolled into UCSD’s OASIS Summer Bridge, a program that taught a variety of classes through the lens of social justice.

“I always had these experiences being a black Muslim woman, but I never had the language to express what I was feeling and what these concepts were,” Dalmar said. “It felt so powerful, to be able to name the things I was experiencing and seeing in my community.”

Dalmar said this program was a perfect precursor to what was to come at her time at UCSD, which was filled with her political involvement on campus. After The Compton Cookout, a party that mocked and ridiculed Black History Month, Dalmar and her friends were involved in protests that lasted for weeks until the school gave in to student demands.

“I’ve never felt more powerful,” Dalmar said. “It basically set the tone for the rest of my college experience.”

Along with continuing to engage in political happenings, Dalmar said she loved exhibiting her creative side at school. Whenever there was a video project or anything that required an artistic touch, she said her classmates would entrust her to take the lead. Still, as the daughter of hard working Somali immigrants, Dalmar said she never thought pursuing a creative career was feasible and instead thought she needed to have a “serious” job.

This led Dalmar to eventually get into UC Hastings College of the Law. Despite excelling during her time there, she realized she was unhappy and in a state of perpetual stress. So, when the opportunity to study abroad in London for a joint masters program presented itself, she jumped on it. Once there, Dalmar was able to step back from the high-strung life and gain perspective. At the same time, President Donald Trump had been elected president back in the U.S., which was a defining moment for the YouTuber.

“It was a turning point in that you understand, ‘This is the state of things,’” Dalmar said. “I came to a really big realization, which was, ‘I can’t make a difference in the world unless I’m my most authentic self.’”

Once Dalmar got back to the states, she apathetically finished her 80-page law dissertation, as she was eager to switch to a more creative field, leading her to BuzzFeed. And despite having little experience in the field, her former colleague and friend Keyera Williams said she was always impressed with the videos Dalmar created.

“(Dalmar) fit in pretty seamlessly in the BuzzFeed system,” Williams said. “All of her videos, I was like, ‘Oh, these are great.’ She’s just one of those people who naturally has it.”

Though Dalmar now freelances for BuzzFeed, she’s taken Tobias’ advice and has focused on her YouTube channel this past year, where she creates travel, lifestyle and self-improvement videos. However, she said she plans to always have a social justice bent in her content and is actively working on two separate docuseries besides her online presence. Dalmar said though her path may be unorthodox, her time at law school only enhanced her ability to create meaningful content as she’s learned how to advocate for marginalized communities.

“I just feel so inspired and thankful,” Dalmar said. “Every single stage of my life has really prepared me for now, and I see myself being very involved in social justice causes my entire life. That’s never going to change.”