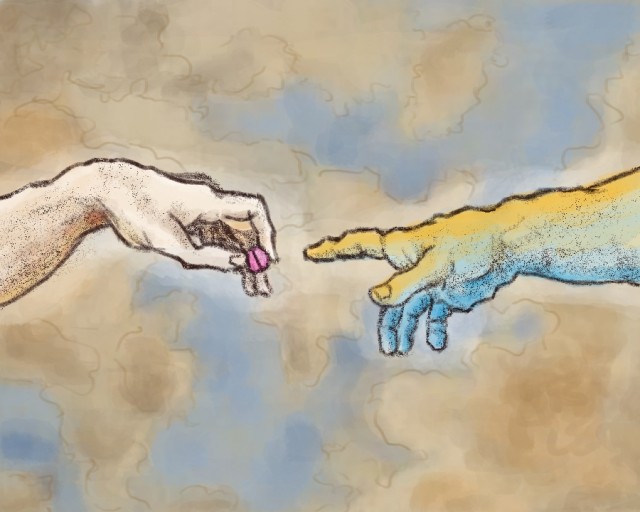 Separation of church and state has long shaped the relationships of public institutions.

And despite its recent collaborations, the University of California is not exempt.

Currently, the UC is contracted with Dignity Health, a Catholic health care nonprofit corporation, to provide university care for more patients and medical student training. Unsurprisingly, this has sparked concerns statewide from physicians and students over how religiously affiliated hospitals undermine health care for LGBTQ+ groups and women.

Dignity Health operates under the Ethical and Religious Directives for Catholic Health Care Services, which uses religious ideology as a basis to determine the conduct of on-site operations. These directives directly limit physicians’ ability to conduct procedures permitted outside of these limitations, such as lifesaving women’s health services. And because of this partnership, those restrictions apply to on-site UC physicians.

Earlier this year, protests amongst physicians, students and activist groups broke out at UCSF and UCLA in response to the contracts potentially expanding UC-wide. The protests found success in San Francisco, and UCSF ended affiliation discussions with Dignity Health in May. At UCLA, the contracts still stand.

If state health care institutions are secular, treatment is mandated to be equal no matter patients’ beliefs, gender or orientation.

But currently, the UC subjects itself to the hospital’s religious doctrine and enables religious influences in health care, even if it means restricting access for women and LGBTQ+ people. Whether or not these doctrines impact the performance of UC physicians one time or every time, an overarching religious presence potentially influencing medical decisions is unacceptable.

Because when religiosity facilitates discrimination in health care, it must be contested by the UC system.

Earlier this year, it was reported that 24 out of 39 Dignity hospitals reject the use of gender-affirming practices such as hormone therapy and surgeries. But access to LGBTQ+-supportive health care goes beyond what occurs under the knife.

“Not offering any sort of gender-affirming type of health care leads to the erasure of these communities, because you’re negating the importance of treating their bodies the way that they want their bodies to be treated,” Sheridan said.

And with every UC contract that doesn’t address these barriers, the UC is complacent in this erasure.

Evan Minton, a transgender patient, was denied his scheduled hysterectomy the day before the procedure. In a California appellate court case, Minton claimed he was denied care because of his gender identity, while Dignity Health claimed the procedure violated its ethical and religious directives, which include sterilization.

Although the directives do not explicitly discriminate against services that affirm gender identity, flexible interpretations of these standards allow Catholic hospitals to justify their refusal of treatment.

And the LGBTQ+ community isn’t the only one hurt by Dignity’s religious doctrines. Education and resources for women’s sexual health range from limited to nonexistent – for example, institutions are prohibited from condoning or promoting contraceptives.

“If they’re not being completely transparent about birth control options and are not talking about it in the best interest of the patient, that completely eradicates an educational aspect of health care that should be available to every single woman,” Sheridan said.

And while abortion might be a more divisive topic, these restrictions have unintended consequences – especially when abortive measures serve to ensure the safety of a woman’s life.

This means a miscarrying patient with a fetal heartbeat can be denied a lifesaving procedure, such as uterine evacuation, by a closed-door ethics committee. Their physician can make a few choices: wait for the heartbeat to stop and risk bleeding out or septic infection, transport the patient to the closest hospital despite having the necessary lifesaving equipment or violate protocol altogether. And according to a UCSF study, these are choices many physicians had to make under the constraints of the ethical and religious directives.

It’s a choice that can mean life or death for the patient.

“Our relationships with other entities that facilitate health services and clinical training at non-UC facilities support our mission of meeting patients’ unmet needs and training the health care workforce California needs,” said a spokesperson for the UC.

The necessary symbiotic relationship between public institutions and nonprofits is obvious, and while the UC insists its physicians will make the right medical calls despite the directives, there are dangerous implications of having religious limitations in the medical field.

“Some of the language in the agreements may not sufficiently reflect our values and expectations, and we are working to address legitimate concerns that have been raised,” said a spokesperson for UCLA Health and the David Geffen School of Medicine at UCLA.

Every hospital, no matter its religious beliefs, should have access to experts and professionals like those from the UCs. A statement from Dignity Health said dissolving these partnerships would be detrimental to certain communities – and they’re not wrong. Dignity Health has every right to conduct its operations within the framework of its religious doctrine – something that draws certain people to these hospitals.

But it shouldn’t come at the cost of restricting potentially lifesaving operations or making patients afraid of disclosing their sexual orientation or gender identity.

The UC claims to support women’s health and the LGBTQ+ community but has yet to negotiate a contract that can ensure health care without the inhibiting influence of religious doctrine.

Increasing contracts is integral to providing health care for all.

But when it comes at the cost of equal access for women and LGBTQ+ members, it’s time to go back to the drawing board.