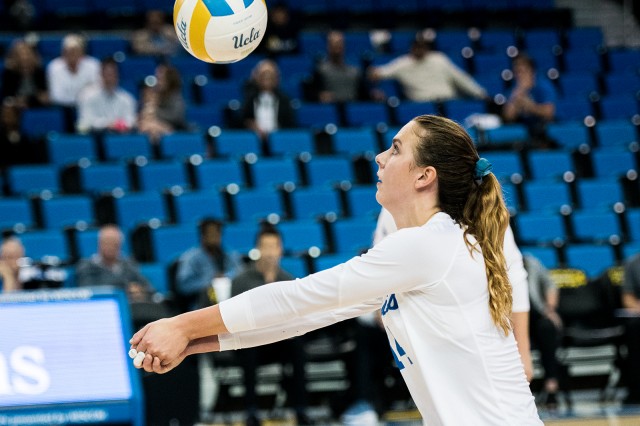 UCLA women's volleyball junior outside hitter Mac May was named the Pac-12 Player of the Year ahead of the Bruins' first-round matchup versus Notre Dame on Friday. (Liz Ketcham/Photo editor)

One year after missing the playoffs for the second time in the past 20 years, the Bruins are back in the tournament.

UCLA women’s volleyball (18-11, 13-7 Pac-12) will head to Madison, Wisconsin, to face Notre Dame (19-9, 12-6 ACC) in the first round of the NCAA women’s volleyball tournament Friday. The Bruins have not faced the Fighting Irish since 2012 when then-No. 1 UCLA won its season-opener in four sets over Notre Dame.

Junior outside hitter Mac May said the difference in success for the Bruins this year was the team’s motivation to constantly improve.

“We have a little bit more drive, a little more heart this season,” May said. “Last year we were just completely disengaged, and this year, every game we try to win a little harder, win in three, something like that.”

UCLA ended its regular season on a four-game winning streak, including a sweep of crosstown rival USC (17-13, 11-9 Pac-12) in the season finale.

Senior outside hitter Savvy Simo – who was named to the All-Pac-12 First Team earlier this week – said the team’s strong finish was important but that the Bruins don’t want to become complacent headed into knockout action.

“I think momentum is definitely important, but we can’t let it get to us,” Simo said. “Just because we won our last four games doesn’t mean anything. We still have to compete against Notre Dame and hopefully against the winning team (of the No. 5 Wisconsin and Illinois State match). Yes, we have momentum, but it’s also a fresh start.”

Joining Simo on the All-Pac-12 First Team is May, who was also awarded the honor of Pac-12 Player of the Year, becoming the fifth Bruin of all time and the first since 1994 to win the award. May led the Pac-12 with 0.36 service aces per set and finished second in kills per set with 4.77.

“Every single day we’re in this gym, everywhere we go, the trainers and coaches, my teammates, they are all pushing me to be my best,” May said. “It’s not something I’ve done alone, it’s completely a team award.”

UCLA will be playing a Notre Dame team that started the season with a 13-3 record before finishing 6-6, including losing three of its last five games. Three underclassmen lead the Irish with over three kills per set – outside hitters Charley Niego and Caroline Meuth, and right-side hitter Sydney Bent.

“We’ve been watching video figuring out what systems (the Irish) want to run,” said coach Michael Sealy. “Obviously we focus more on our side of the net, but we’ll throw some of their components into a practice session so it’s not the first time we see it when we roll out.”

Should the Bruins win Friday, they will face the winner of No. 4 seed Wisconsin (22-6, 18-2 Big Ten) and Illinois State (22-11, 12-6 MVC) the next day. Wisconsin finished the season ranked No. 5 in the American Volleyball Coaches Association’s Coaches Poll and won the Big Ten, the conference with the highest number of representatives in the tournament with seven. Illinois State clinched an automatic playoff berth for winning the Missouri Valley Conference tournament and is one of two MVC teams in the NCAA tournament.

The Bruins’ first-round match will begin at 2:30 p.m., and they will take the court again on Saturday at 4 p.m. if they win.