By Olivia Bridgnell and Brooke Cuzick 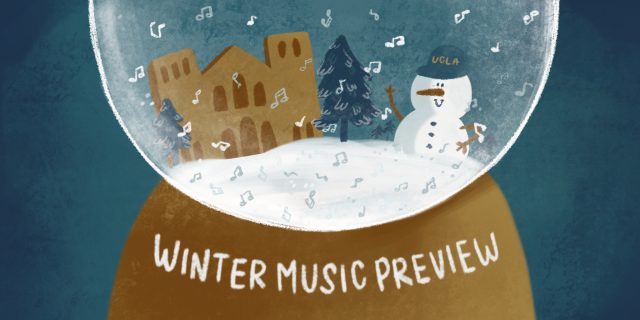 The albums of fall quarter ushered 2019 out with a bang, with Liam Payne’s lyrically controversial “LP1” leaving a charting disappointment in its wake. However, other releases, such as Harry Styles’ psychedelic-yet-sorrowful “Fine Line” surged into top Billboard slots just in time for the new year. And, of course, a new decade brings the promise of new music as sparklers fade and the New Year’s Eve clock strikes midnight.

The 1975 has excelled in garage rock, shined in pink neon and explored drug addiction in past releases – all leading up to its most thematically ambitious album yet.

The band now wears the climate change activist hat with the much-anticipated release of its third album, “Notes On a Conditional Form,” on Feb. 21. Based on released singles “The 1975,” “People” and “Frail State of Mind,” lead singer and lyricist Matty Healy doesn’t comment on the human condition lightly.

This third release shows a maturing evolution for the British alternative rock band. The focus on sex and drugs that permeated its 2013 debut release seems far away from the ambitious upcoming record – with the album’s opening track and lead single “The 1975” setting a Greta Thunberg speech about climate change to the band’s own signature minimalistic chiming. When placed alongside the introspective themes of “Frail State of Mind,” it is clear this album is set out to tackle global issues as well as issues that affect people as individuals.

The bombastic and desperate tones of “People” balance the two slower singles, hinting at the serious tones of the album. If the album’s whopping 22 tracks incorporate the same soul-shaking honesty about climate change and politics, The 1975 could be introducing a record fit for the music history books.

“The Slow Rush” by Tame Impala

Created and recorded by frontman Kevin Parker, Tame Impala’s fourth studio record “The Slow Rush” will be released Feb. 14. The band recently released the album’s fourth track, “Posthumous Forgiveness,” which features four minutes of a slower, psychedelic groove, and two minutes of upbeat drums and catchy lyrical melodies. Other singles from the upcoming LP include “Borderline” and “It Might Be Time,” and Tame Impala also teased an upcoming release of the album’s eighth track, “Lost In Yesterday.”

However, the remaining eight tracks largely remain a mystery. Parker said some songs touch on the passage of time, including the idea of one’s life flashing before their eyes. Parker also said “It Might Be Time” was inspired by Supertramp-esque ’70s melodies, mixing older and newer musical styles.

While Tame Impala will continue its trend of blending older musical influences with its characteristic spacey sounds, only time will tell if the album will be as musically coherent as its previous records.

Selena Gomez’s album – four years in the making – already features a No. 1 hit and will dive into elements of her personal life usually kept private.

Since the release of her last album, Gomez has been working on “Rare,” which will be released Jan. 10. The 13-track album features previously released pop singles “Look At Her Now” and “Lose You to Love Me.” The latter song reached No. 1 on the Billboard Hot 100 on Nov. 4, marking Gomez’s first track to reach this milestone; meanwhile, the former peaked at No. 27. While fans have already heard these two singles, they can look forward to new songs such as “Crowded Room” and “A Sweeter Place,” which feature 6LACK and Kid Cudi, respectively.

While the songs may feature other artists, the album will provide more insight into Gomez’s experiences. Gomez promised honesty in the album, as she said it is analogous to a personal diary about the last few years of her life. Promotional photos and videos feature Gomez as a young child, showing her focused reflection on the past. She said the album features soulful tracks while still retaining her signature pop style, and it captures recent moments in her life, which could include her Lupus diagnosis.

It is likely fans will enjoy the album because of its honest insight into Gomez’s life and feelings, but whether any other tracks will compare to the success of the previously released single “Lose You to Love Me” is uncertain.

One Direction is officially in the past, as its last member is slated to release his debut album.

Louis Tomlinson has been steadily releasing singles to the public since 2016, but will officially drop his full-length album “Walls” on Jan. 31. The artist has stepped away from his past collaborations with artists such as Steve Aoki and Bebe Rexha to debut something completely new.

Tomlinson shows his tender side on his first single “Two of Us,” in which he opens up emotionally to his listeners, honoring the death of his mother. Other singles “Kill My Mind” and “We Made It” follow similar pop themes as Tomlinson’s past work in One Direction. The love songs seem to discuss Tomlinson’s personal experiences, but are vague in comparison to “Two of Us.” This effect, in combination with the songs’ catchy pop choruses, will make them relatable to many listeners, but likely will leave no significant mark outside of being earworms.

Being the last member of the former boy band to release an album under his own name, Tomlinson acknowledged the patience his audience has demonstrated while they’ve waited. But the depth or lack thereof of “Walls” will determine if the four-year wait was worth it.

Halsey hopes her third studio album, “Manic,” will give listeners a glimpse into her identity beyond her stage name.

The singer, whose real name is Ashley Frangipane, said the album discusses “Ashley” – the title of the album’s opening track and an anagram of her stage name, “Halsey.” The 16-track album is scheduled to be released Jan. 17 and will explore the artist’s journey to learn more about herself in the last six years since entering the spotlight at 19 years old.

Before gaining her fame, Halsey was diagnosed at 17 with bipolar disorder. She said this is the first album she wrote while experiencing a manic episode, resulting in a variety of styles, from hip-hop to rock to country. The diversity can be heard in the previously released singles, from the country influence in “Finally // beautiful stranger” to BTS star Suga’s rap feature in “SUGA’s Interlude.”

On Jan. 17, fans will determine if Halsey’s insight into her identity will unite the record’s songs into an emotionally vibrant and sonically cohesive collection or if the differing musical genre influences will detract from her overall album message.