Battle of the Editors: Bold predictions for 2020 from a Chip Kelly departure to a men’s basketball title 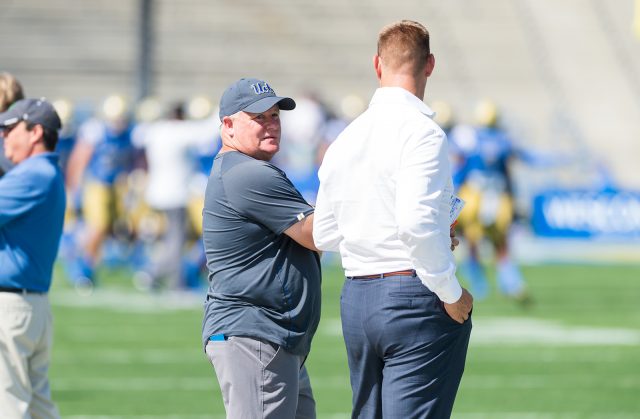 2020 vision: As a new calendar year begins, the Daily Bruin Sports editors give their hottest takes about what could go down in the world of UCLA Athletics in 2020 – from coaching changes to championship teams.

Whether Kelly gets fired or there is a “mutual parting of ways,” I don’t think the former Rose Bowl champion will still have an office in Wasserman Football Center by year’s end.

UCLA football posted a one-win improvement over Kelly’s first campaign this fall, and the Bruins were still in the running for a Pac-12 title as late as Nov. 15. That helped make up for a second straight historically poor start to the season, but it didn’t do much in terms of calming things down behind the scenes.

Ahead of the season finale against California, rumors swirled about Kelly leaving the program at the end of the season. Those reports were eventually shot down by the coach, but his 7-17 record has raised eyebrows, and the drama surrounding his relationship with defensive coordinator Jerry Azzinaro was certainly tangible.

UCLA is not a football school compared to the likes of Alabama, Oklahoma or Ohio State, but expectations still exist. If Kelly fails to lead the Bruins to a bowl game for the third straight year – something that hasn’t happened since 1974 – he’s as good as gone.

Some people may not be comfortable with only giving a coach three years to turn a program around. UCLA’s shortest-tenured coach in the last 40 years is Rick Neuheisel, who was fired after going 21-28 during his stint of nearly four years in Westwood.

Three years is different from four, yes, but giving a high-profile hire that short of a leash is not unprecedented in college football. Texas fired Charlie Strong after three losing seasons, Michigan parted ways with Rich Rodriguez after a 15-22 record across three years and Florida State gave Willie Taggart the boot after just two sub-.500 seasons.

If UCLA strings together an eight-win season, wins a bowl or wins the Pac-12 South, then Kelly should be safe.

But it is just as likely that the Bruins fall flat yet again and fail to secure a postseason bid next fall. The biggest programs in the country do not accept failure and mediocrity, and UCLA shouldn’t either.

If UCLA and its new athletic director want to be a power in the college football world, this year has to be do-or-die for Kelly.

The Bruins haven’t lost a game yet, and they won’t until the postseason.

No. 8 UCLA women’s basketball is at a season-high national ranking after a 12-point win over previously undefeated No. 18 Arizona – its second win over a ranked opponent this season.

The Pac-12 is widely accepted as the best conference in women’s basketball, with four teams currently sitting inside the top 10 nationally. Only two of those teams, UCLA and No. 3 Oregon State, remain undefeated, and the Bruins currently sit at the of top the conference at 3-0.

UCLA went 12-6 in the Pac-12 last season, with losses coming twice to Stanford, twice to Oregon State, once to Oregon and once to USC.

This year, the Bruins will have to face the Cardinal, the Badgers and the Beavers just once each and have already defeated the Trojans once – by 24 points.

UCLA’s success has come, as predicted, from the dominance of junior forward Michaela Onyenwere – who is averaging 18.9 points and 7.7 rebounds a game – and redshirt senior guard Japreece Dean, who ranks 13th in the nation with 5.6 assists per game.

Early contributions from freshman guard Charisma Osborne and junior forward Lauryn Miller have been unexpected high points in the Bruin game plan, especially on the defensive side of the ball where there were gaps left after losing last year’s graduates.

Miller and Osborne are UCLA’s second and third leading rebounders, with 101 and 74, respectively, and coach Cori Close has cited each as leaders in terms of hustle and toughness.

So far, Close’s formula has only moved the Bruins up in the rankings, and that doesn’t look to be changing any time soon.

The 2019 regular season was one of the Bruins’ best in program history, but fans won’t be treated to the same kind of dominance in 2020.

UCLA baseball set numerous records last year en route to its Pac-12 championship and No. 1 national seed in the NCAA tournament. After the Bruins were named a unanimous top-five squad to open their season, coach John Savage and his team went on to win a program-record 47 regular season games, never dropping a series.

The Bruins held on to the No. 1 ranking for 11 straight weeks and tallied 24 conference wins – also a program record. UCLA was propelled by its 2016 recruiting class, ranked No. 1 in the country at the time.

And just as the Bruins got it done at the plate, the pitching staff posted a nation-best 2.58 combined ERA. The Bruins were led by then-junior right-hander Ryan Garcia, who earned a slew of postseason awards after going undefeated and posting 107 strikeouts though 84 1/3 innings pitched.

But as integral as the recruiting class of 2016 was to the 2019 season, many of them won’t be staying for another year in Westwood. Toglia, Garcia and Strumpf were all selected in the first night of the MLB Draft, and they were followed by 10 other Bruins over the next two days.

Needless to say, UCLA has lost a lot of firepower – in both the batter’s box and the pitcher’s mound. Performing to the same benchmark of 2019 would be a tough task for any team, much less one that has lost its most productive offensive weapons and one of the best pitching talents in the country.

After losing so many key starters, the Bruins aren’t in line for another No. 1 national seed. And if the returning Bruins can’t step up to fill the shoes of their departed teammates, they won’t be in the same position to make a deep postseason run as they were last year.

This season will be about developing the younger talent on the Bruin squad – but don’t expect that to translate into nearly the same number of wins as last year.

But while both will miss all or most of this season in preparation for this summer’s Olympic Games in Tokyo, UCLA softball will nevertheless make another deep run into the postseason, if not win it all again.

Garcia pitched the most innings for the Bruins throughout 2019, but then-freshman Megan Faraimo and then-sophomore Holly Azevedo both proved themselves suitable replacements in the circle, as they finished with a 1.41 and 2.12 ERA, respectively, and collected a combined 27-5 record.

With another year of experience under their belts, both pitchers could easily tag team in the circle to come close to Garcia’s success, especially with the addition of incoming freshman Lexi Sosa, who can provide power in the circle and at the plate.

As for making up for Garcia and Nickles’ offensive contributions, there are multiple returning players who showed their power at the plate last season. Sophomore Kelli Godin excelled at hitting for average, finishing with a .418 batting average, and redshirt junior Aaliyah Jordan can bring power, having hit .383 with 13 home runs last season.

In fact, all four of the returning players who started the majority of the Bruins’ games last season finished with a .300 average or higher, making it more than likely that UCLA will be able to continue its recent postseason success.

With every Pac-12 team showing signs of vulnerability, UCLA men’s basketball will finish this season as either regular season champions or winners of the Pac-12 tournament.

Each Pac-12 team has at least one conference loss other than Stanford and Arizona, two teams that have played just one conference game each. Both teams have tough matchups this upcoming weekend, with Arizona playing at the Oregon schools and Stanford hosting both Washington teams.

As coach Mick Cronin gets his team more comfortable with his defensive system, high scoring offenses may struggle to break down UCLA, keeping the Bruins in contention in almost every game remaining. So far this season, opponents have scored over 80 points just once; last season’s team gave up 80 or more six times at this same point last year.

The Bruins’ schedule will not be easy to navigate. UCLA has to play both Oregon and Oregon State on the road, and it still has two matchups each with Colorado, Arizona and USC. Every night will be a battle, but with the rest of the conference beating up on each other, stealing one or two extra games could be the difference between a conference championship and playing in the first round of the Pac-12 tournament.

Speaking of the tournament, only four games – or three if the Bruins secure a top-four seed – stand in the way of claiming the Pac-12 title and an automatic berth to the NCAA tournament. While this team is probably not good enough to advance past the first weekend, even making it that far would feel like a major step forward.

If the Bruins fail at either of these, it would not spell the end of Cronin. However, either one of these could energize the fanbase, draw in recruits and earn Cronin good faith before the new athletic director is hired later this year.