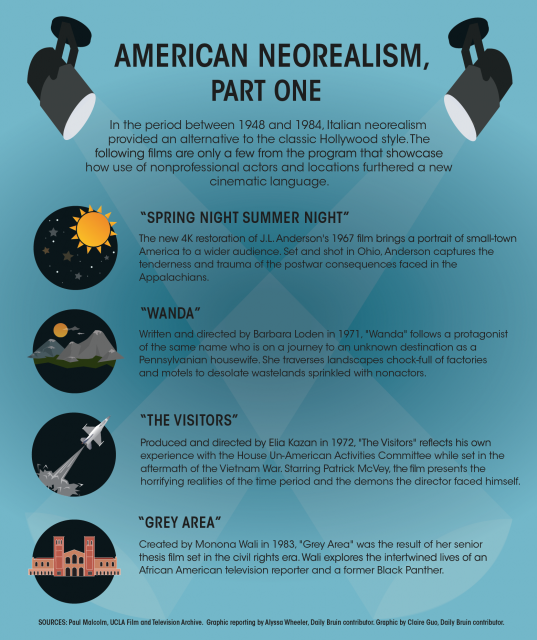 The carelessly titled exploitation recut of J.L. Anderson’s “Spring Night Summer Night” has been struck from history thanks to a 4K restoration of the original film. The film makes its West Coast premiere at the Billy Wilder Theater on Friday in its newest program “American Neorealism, Part One,” featuring films from 1948-1984 influenced by Italian neorealism. The films are marked by modest independent budgets necessitating the use of nonprofessional actors and on-location shooting, providing insight into various American communities, said co-curator Ross Lipman.

“The series grew from a realization I had some years ago, when restoring Barbara Loden’s ‘Wanda,’ that a lot of the films on which I’d been working could be seen as neorealist,” Lipman said. “I soon realized there was in fact a whole sector of independent cinema that shared this influence, and they happened to include many of the very best of the country’s films.”

Well-known classics by the likes of directors Charles Burnett and John Cassavetes will be screened alongside more obscure, rare films, Conheim said. Heading the program’s schedule Friday evening is Anderson’s “Spring Night Summer Night.” The film follows a half brother and sister who engage in an illicit love affair, but the 1967 film was not able to obtain commercial distribution in its initial release. Instead, Anderson’s film fell into the hands of an exploitative distributor who forced the filmmakers to add on gratuitous sex scenes that completely shifted the tone from artful to brash, ruining the film, Conheim said.

Conheim and Lipman have since worked to restore the piece’s contemplative storyline in order to present it to an audience as intended. The director’s cut is a far more subtle and poetic take on the story, offering a thoughtful pace, Conheim said. Rather than focus on plot, he said “Spring Night Summer Night” sets a hopeless mood to encapsulate the characters’ feelings of entrapment in their small-town family.

Of the same small-town sensibility is Loden’s “Wanda,” screening Jan. 17 at the Billy Wilder Theater. Loden’s son, Marco Joachim, will be at the showing in person to elaborate on his mother’s work. Set in a coal-mining town in Pennsylvania, the film follows floater Wanda who becomes involved with a thief after giving up her children in a divorce.

“(‘Wanda’) was a very homemade, very low-budget film,” Joachim said. “The idea was not to be very Hollywood and to do something very personal. My mother … made a very personal movie, which touched everyone who saw it because it’s so real.”

The authenticity is aided by its neorealist influence, employing Pennsylvania locals to portray characters in the film similar to Italian neorealists, who opted to use nonactors, Joachim said. For example, he said a bank teller seen later in the film was not played by an actor, but was rather an actual employee of the bank.

“Wanda” and “Spring Night Summer Night” are just two of the films in the series that point to the nearly unrecognized American neorealist movement, Lipman said. The works represent a diverse body of subjects representative of the American population, he said, which is often omitted from mainstream cinema. Lipman said the films’ abilities to shatter Hollywood’s typical portrayal of a homogenous America make them worth seeing by all audiences. The relative rarity of films in the program also mark the screenings as particularly significant, Conheim said.

“All these films benefit from being seen on a big screen because of their imagery,” Conheim said. “People need to just remind themselves how these intimate films … can be really enjoyed on a mass scale in the theater.”