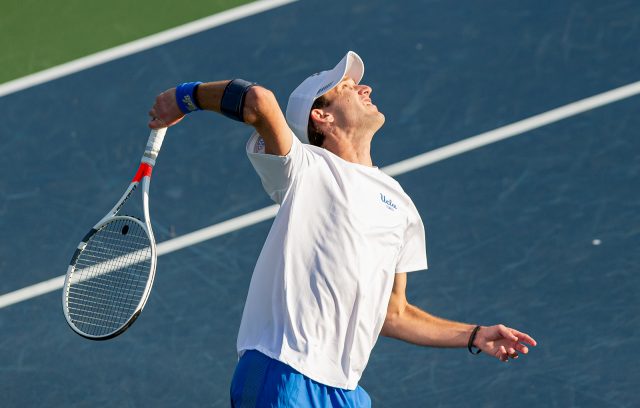 The Bruins will aim to keep their momentum going.

After taking all seven points in its home opener against Brigham Young on Wednesday, UCLA men’s tennis will head to the Sherwood Collegiate Cup in Thousand Oaks, California, with match play spanning from Friday to Sunday.

The tournament will bridge the week-and-a-half long gap between BYU and UCLA’s next dual match, with UCLA facing off against San Diego State on Jan. 25.

Unlike many of the fall preseason tournaments where only a few Bruins traveled each time, UCLA will be sending nearly its entire team to Thousand Oaks. The only players not traveling will be junior Lucas Bellamy, sophomore Roscoe Bellamy and sophomore Mathew Tsolakyan.

Senior Ben Goldberg will get the chance to sustain his strong early season form after advancing to the quarterfinals in the Southern California Intercollegiate Championships. Goldberg tallied his first win of the dual match season with a 6-2, 6-1 win against BYU’s Jack Barnett.

Junior Connor Hance will also be in action this weekend, after winning the clinching match for the Bruins yesterday on court. No. 6. Hance won his first match of the season 7-6 (7-4), 6-3, against BYU’s David Ball on Wednesday. The victory marked his first in dual match play since the 2017-18 season.

Matchplay will begin in Thousand Oaks on Saturday.

The Bruins are headed back to the track.

The UCLA track and field team will travel to Seattle to compete at the UW Indoor Preview on Saturday.

Junior thrower Alyssa Wilson was the only Bruin to compete at last week’s Northern Arizona Friday Nights Duals in Flagstaff, Arizona, but a majority of the team’s athletes will open their seasons this weekend, with at least one Bruin slated to compete in all but six events. The Bruins will also get an early look at four Pac-12 rivals in Oregon, Oregon State, Stanford and Washington.

Lee is returning to the high jump after finishing sixth at the NCAA Outdoor Nationals in 2019. The All-American high jumper said she has ambitious goals for the upcoming season.

“I’m hoping I could potentially make it to outdoor nationals and potentially try to win that,” Lee said. “I got sixth place last year even though I was injured last season. Hopefully I can put it all together with no injuries holding me back.”

Like Lee, injuries hampered Anderson in 2019, preventing her from competing entirely. She said she is returning to the track with the goal of becoming a national champion.

“The 400 (meter hurdles are) pretty open right now,” Anderson said. “My main goal is to become a national champion in that event.”

Track event action in Seattle will begin with the fastest heat of the women’s 3000m at 8:45 a.m. Field events will kick off with the women’s pole vault at 9 a.m.

The Bruin divers will return home for the first time in three months.

UCLA swim and dive (7-0, 4-0 Pac-12) will host its annual Bruin Diving Invitational over the weekend, welcoming 87 athletes from 17 universities to the Spieker Aquatics Center.

Coach Tom Stebbins said with the postseason approaching rapidly, starting with the Pac-12 Championships in late February, competing against divers from top teams such as No. 4 Stanford, No. 9 USC and No. 12 Missouri will be great preparation for national competitions.

“I think the team’s just starting to shape up for the end of the year, so I’m really looking forward to this,” Stebbins said. “There’s a lot of really good diving happening this weekend, so I’m looking forward to seeing how we match up with some of the better teams, not only in the conference, but in the country.”

While both of those divers have since graduated, all five of UCLA’s current divers will participate this year. Four divers will compete in all three diving events, but Stebbins said sophomore Veronica Thompson would miss the 3-meter and platform events due to a lingering shoulder injury.

Each day’s events will start at 10:30 a.m. The women’s 1-meter competition will be first Friday, followed by the 3-meter Saturday and platform diving Sunday.