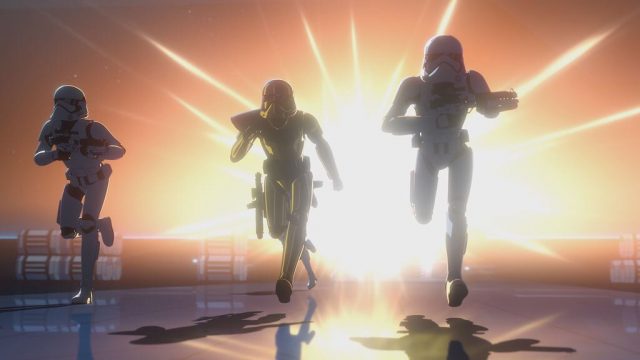 The Resistance and the First Order continue to clash in “Star Wars Resistance.”

The computer-generated animated series, which directly precedes “Star Wars: The Force Awakens,” will air its series finale on Disney XD on Jan. 26. The story’s arc follows Kazuda Xiono, a young pilot employed by the Resistance to investigate the worsening threat of the First Order. Alumna Jackie Watson, who worked on the series’ two seasons as a production coordinator for the animation shots department at Lucasfilm, said “Star Wars Resistance” stays true to the Star Wars canon’s mythology and continuity. Watson said it also utilizes a new anime-inspired animation filter called “toon shader,” which makes the show look two-dimensional when it is actually three-dimensional.

“‘Resistance’ takes place at a very particular time in the Star Wars continuity that (adds) layers onto the full experience of Star Wars,” Watson said. “Characters, creatures and places in ‘Resistance’ might show up in movies later. … It’s (attached) to the larger universe.”

In order to reflect the creative directors’ vision for each episode, Watson said she worked with the show’s animation supervisor to complete creative retakes of the characters’ actions, facial expressions, effects and props in the sequences that were sent to her from overseas studios. She said these creative retakes were often fine-tuning minor details, such as turning the corners of a character’s mouth upward or moving a leg out farther from their body when they jump to provide a sense of realism.

Along those lines, story and layout coordinator Mallory Sparr said she was a point of reference for animators when it came to the intentions of certain moments in the episodes, such as how a character should react to sarcasm or jokes. But, she also coordinated with the Lucasfilm Story Group, which oversees and ensures all Star Wars projects adhere to the Star Wars canon.

“We wanted to introduce the Star Wars universe to a whole new group of people, which is invaluable because everyone alive nowadays has had a Star Wars created in their lifetime, in their generation,” Sparr said. “(‘Resistance’) is just another creative choice to introduce it to even more people.”

To provide such continuity, she said she worked with the Lucasfilm Story Group to make sure the appearance of major characters in “Star Wars Resistance” – like the droid BB-8 – were timed accurately in accordance with their presence in the feature films. She also addressed smaller details like naming new droids according to an established naming system.

“One of the things that’s always super nice about Star Wars is that it’s really accessible for everybody.”

In the case of BB-8, Sparr had to confirm with the Lucasfilm Story Group that his beeps, noises and swivels were accurate to align with the feature films’ portrayal of him. Watson said the characters and events in the show allude to what major characters, such as Leia Organa and Poe Dameron – who also make appearances in the show – are doing before and during the sequel trilogy.

[Related: A quick guide to some of Disney+’s original content]

The show is more lighthearted than other Star Wars content in terms of its colorful animation style and comedic tone. However, Danielle Witz, the production manager on the show, said that although these aspects are appealing to younger viewers, the series upholds the universality of Star Wars storytelling.

“One of the things that’s always super nice about Star Wars is that it’s really accessible for everybody,” Witz said. “There’s something in it for everybody because it’s anchored in real-life feelings, situations, emotions … just kind of dressed up for this particular universe.”

Unlike most Star Wars content, “Star Wars Resistance” does not follow Force users such as the Jedi and Sith. Instead, Sparr said it highlights the day-to-day lives of citizens in a galaxy trying to resist darkness by relying on teamwork, perseverance and hope.

Watson said they aim to make each character reflect these values, as they are diverse in their personalities while also being comedic – ultimately reflecting the accessibility and cultural impact of Star Wars storytelling.

“The depth of any Star Wars content is good against evil,” Watson said. “That’s what (‘Resistance’) is showing, that there’s even more people out there who are willing to fight, … to stand up for what you believe in regardless of where you come from.”