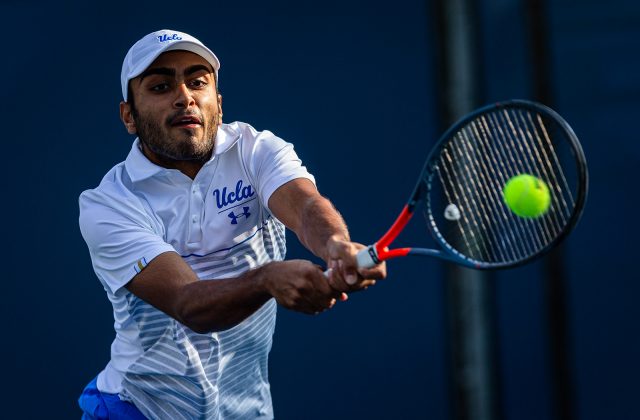 Sophomore Govind Nanda advanced to the semifinal round of the Sherwood Collegiate Cup –farther than any other Bruin for UCLA men's tennis. (Andy Bao/Daily Bruin)

The Bruins continued their early season success over the weekend.

UCLA men’s tennis (1-0) competed against players from USC, Stanford and Texas A&M at the Sherwood Collegiate Cup in Thousand Oaks, California, from Friday through Monday.

Coach Billy Martin said the tournament posed an opportunity for players to get back into the flow of season play, while allowing them to prepare for this weekend’s match against San Diego State.

“We all need to get better after the holidays, that’s why we participate in these tournaments,” Martin said. “We’re building to get better and better, especially for the upcoming weekend which is very important to us.”

The team had eight players compete in the singles round of 32, with sophomores Patrick Zahraj, Govind Nanda, Eric Hahn and junior Connor Hance all advancing past the first round.

Hance chose not to participate in the round of 16 due to soreness, according to Martin.

“He was really sore after his match (against BYU) on Wednesday and played a long match on Friday,” Martin said. “It was mainly just a precaution.”

After squandering eight match points in his narrow 6-0, 3-6, 7-6 (6) victory against BYU’s Ben Gajardo in the season opener on Wednesday, Zahraj was able to advance to the round of 16 in Thousand Oaks.

Zahraj quickly defeated Texas A&M’s Pranav Kumar 6-3, 6-2 in his first singles match before falling to eventual semifinalist Axel Geller of Stanford in the subsequent round.

Teaming up with junior Bryce Pereira in doubles, Zahraj took an early exit after losing to Texas A&M’s Noah Schachter and Pranav Kumar in the first round. However, the duo secured a late-set victory in the consolation draw, beating Stanford’s Sangeet Srihar and Filip Kolasinski 7-6 (6).

UCLA’s top-seeded singles player, junior Keegan Smith, partnered with Nanda in doubles, where they advanced to the finals but fell to Daniel Cukierman and Riley Smith of USC, 7-5.

“We should’ve won the doubles match after serving with a 5-4 lead. We had a match point but ended up losing 5-7,” Martin said. “It was definitely a tough loss.”

Martin said he played it cautiously with Smith, only having him play in doubles and a shortened singles match in order to keep him fresh for the upcoming ITA kick-off weekend.

“He’s played a lot of tennis already,” Martin said. “Doing well in this tournament means playing a lot of matches, which can really beat you up. I didn’t want to take any chance of him being tired this weekend.”

Smith’s doubles partner Nanda was one of the Bruins who played a total of seven matches over the weekend. He advanced to the semifinals in singles and the finals in doubles.

“There’s a little less pressure in these tournaments,” Nanda said. “I just played my game, trusted myself and fought hard and ended up with a good result.”

It was an improved performance from his match on Wednesday, where he started slow and fell victim to a bevy of unforced errors, Martin said.

“He looked like he was playing better and timing the ball a little bit better this weekend,” Martin said.

Redshirt junior Connor Rapp, sophomore Max Wild, senior Ben Goldberg and redshirt freshman Blaine Hovenier all failed to advance past the first round of singles. In doubles, freshman Drew Baird paired with Rapp, and they joined the Goldberg-Wild and Hahn-Hovenier duos by falling in the first round as well.

UCLA will play San Diego State on Jan. 25 as part of ITA Kick-Off Weekend and should they win – will face either UCF or San Diego the next day.