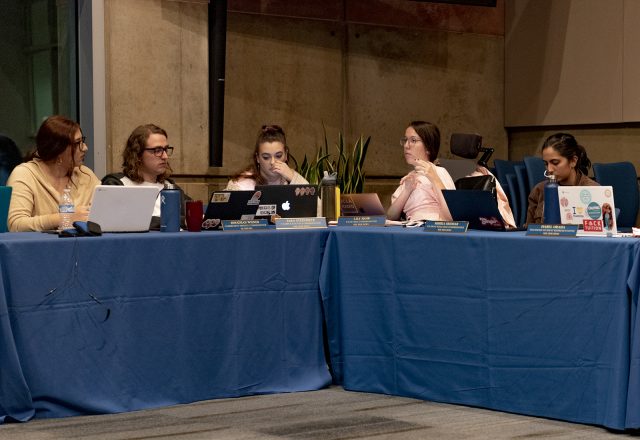 For UCLA, voting on Proposition 13 could mean funding in the range of millions for the school. Reinvesting those funds could help with maintenance issues and seismic improvement. (Niveda Tennety/Assistant Photo editor)

Even at the nation’s top public university, campus spaces are not always top-notch.

From broken desks to leaky pipes, inaccessible classrooms to routine flooding, it’s easy to see how UCLA is buckling under the strain of being the second-oldest and most populous University of California campus in the system.

But UCLA is not alone in these problems. The university faces the same challenges as all of California’s public universities and colleges – aging buildings and a lack of funding to modernize them.

More than half of the UC’s public buildings are over 30 years old. The California State University system is also showing its age: Half of the system’s facilities are 40 years or older, and a third is more than 50 years old.

This is not just true for higher education. For California’s younger generation, millions of K-12 students attend classes in unsafe and unhealthy schools, which can be detrimental to long-term education and well-being.

That’s why the UC Student Association joined the bipartisan California Coalition for Public Higher Education, which is composed of teachers, doctors, nurses, firefighters and military veterans supporting the school improvement bond on the March 3 ballot. The bond, Proposition 13, will provide $15 billion in critically needed funding to protect the health and safety of California students from prekindergarten through college.

The bond measure, officially titled the California Public Preschool, K-12, and College Health and Safety Bond Act of 2020, may have the same ballot-designated number as the infamous tax measure that largely defunded public schools. This time, however, Prop. 13 represents almost the complete opposite – the strongest school bond in California history.

At UCLA, the passage of Prop. 13 could mean millions of dollars in reinvestment toward two of UCLA’s biggest looming facilities issues: deferred maintenance and seismic improvement.

While UCLA’s nickname of “Under Construction Like Always” seems true with record-breaking housing construction, a lack of maintenance funds have led to the degradation of UCLA’s existing buildings.

This “deferred maintenance” is the reason why many of us face flooded financial aid offices, inaccessible elevators and deficient classrooms.

Perhaps most worrying of all, UCLA is also in need of high-level seismic improvements. Fifteen of our campus buildings – including Powell Library, Young Research Library and Murphy Hall – pose a serious risk to life in the event of an earthquake.

This was not always the case.

We used to have a continuous pipeline of capital improvement dollars through state bonds. But the last one to provide significant funding for public higher education infrastructure was in 2006. During the Great Recession, funding for facilities modernization at the state’s public education institutions plummeted. As a result, UCLA and its sister schools have major backlogs of deferred maintenance.

Should Prop. 13 pass, the UC, CSU and community colleges stand to gain $6 billion in facilities reinvestment. An additional $9 billion will fund critical health and safety improvements for California’s pre-K-12 schools.

Because most rundown buildings can be found in low-income school districts, this bond measure includes reforms to ensure equitable funding by investing in school districts that need these funds the most.

This measure would also require the UCs that receive funds from the bond measure to develop a five-year plan for developing affordable housing for its students – a much-needed step toward improving conditions for students living in Westwood, the state’s most expensive rental market.

And students can play a pivotal role in making this happen by voting in our state’s March 3 election.

If students aren’t registered to vote, they can do so by Feb. 18 by going to the Secretary of State’s website. If they miss that deadline, Bruins can conditionally register and vote at the county’s elections office.

If students are registered to vote at their parents’ homes or somewhere else they won’t be on election day, they can get an absentee ballot by completing a vote by mail application form. Those forms must be requested by Feb. 25.

This will be a highly consequential election, with presidential candidates at the top of the ballot. But now more than ever, a yes vote for Prop. 13 matters.

Because when it comes to the safety of our buildings and classrooms, students’ lives depend on it.

Arasasingham is a third-year global studies student and the Government Relations Chair for the UC Student Association. He also serves as an Undergraduate Representative on the Associated Students UCLA Board of Directors.