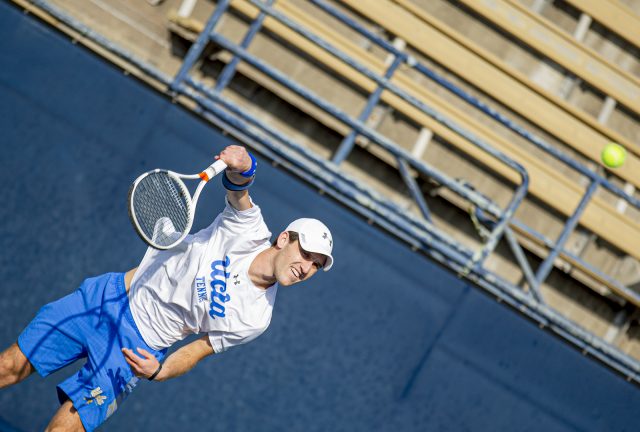 Senior Ben Goldberg has logged two wins at No. 4 singles for UCLA men's tennis this season and is one of three captains for the Bruins – alongside sophomore Govind Nanda and junior Keegan Smith. (Andy Bao/Daily Bruin)

When Ben Goldberg began his freshman season in 2016, he wasn’t expected to grow into the player he is today.

But since then, the senior co-captain for UCLA men’s tennis (3-0) has risen through coach Billy Martin’s lineup, starting every match in 2020 at the No. 4 singles spot without losing a match so far.

“Oh gosh, I think it’s a great story,” Martin said. “I’ve seen it happen a few times, where I’ve brought (in) a good player and someone who would be a great team person, … but to see what (Goldberg) has done and how much he’s improved and how much he wants it – I couldn’t be prouder of him.”

Goldberg’s singles contest served as the clinching match for UCLA on Sunday as it rounded out a two-win performance over ITA Kick-Off Weekend, downing San Diego State and UCF for a berth to the ITA Division I National Men’s Team Indoor Championship in Madison, Wisconsin, next month.

Goldberg collapsed to the ground and was swarmed by his teammates after coming out on top of a 25-shot rally that ended the final game in the final set.

“It means absolutely everything,” Goldberg said. “Growing up around here, being the biggest Bruin fan my whole life, I was crying tears over there. Seeing family, friends, everybody out there, it was so special to do it with all of them there.”

His freshman year, Goldberg did not see dual-match action until the ITA indoors in February, when UCLA faced off against then-No. 9 USC in the first round. Goldberg teamed up with then-junior Austin Rapp at the No. 3 spot in doubles, battling from 3-1 down in the set to register the Bruins’ first doubles win of the day.

Goldberg then became a regular in the doubles lineup, eventually pairing with then-sophomore Maxime Cressy at the No. 3 spot for the remainder of the season. Throughout his debut year, Goldberg tallied a 7-10 dual-match record in doubles.

He took the court in just nine dual matches the following year, beginning the season in the singles lineup before eventually making sporadic appearances in doubles. But after starting against UC Irvine on March 27, 2018, Goldberg didn’t earn a starting spot until his junior campaign.

Goldberg’s third season was his breakout year, with the then-junior appearing in all 25 of UCLA’s dual matches, mostly at the No. 4 and No. 5 singles positions.

Goldberg said his rise to the middle part of the singles lineup was the product of hard work and strong mental fortitude.

“I know I’ve improved a lot,” Goldberg said. “Mentally, I’ve grown a lot. Just believing in myself, that has been the biggest game changer.”

This season, Goldberg was named co-captain of the team along with junior Keegan Smith and sophomore Govind Nanda, who hold down the No. 1 and No. 2 singles spots, respectively.

“I was super pumped (about Goldberg’s win Sunday),” Smith said. “That was super cool for him to win that. He’s a really good guy. Everyone loves Ben.”

Though Goldberg has never occupied a top singles spot, Martin said his work ethic and perseverance have earned him the responsibility of serving as a role model for the team.

“(Goldberg) was as quiet and as timid as I would have in a freshman, and now he’s leading a lot by example,” Martin said. “When he’s playing out there, it’s 110%, there’s no doubt about that. All of us know that Ben would go out of his way to help anybody on our team.”