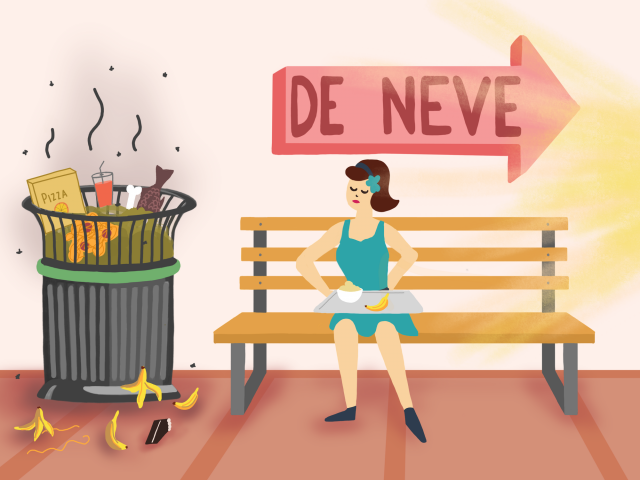 Just because students pay for a meal plan, doesn’t mean they have access to food.

But with a little more management from a top-tier university, students wouldn’t be left to solve that problem.

The University of California Office of the President’s Global Food Initiative conducted a study in 2016 and found that 42% of students experienced food insecurity. Beyond access to necessary meals, many students lack access to nutritionally-adequate food, and even last resorts like the Community Programs Office Food Closet aren’t brimming with healthy options.

Despite boasting the top dining halls in the nation, UCLA’s excess food has been thrown in the trash for years, failing to feed students with food insecurity. Several student-led programs have attempted to solve these issues, but have had to jump through the hoops of their own university’s bureaucracy.

Bruin Dine is one of these programs – but what seemed like a solution to help UCLA not waste food was quickly shut down by the UCLA Office of Environment, Health & Safety after its first event in February 2018. The California Good Samaritan Food Donation Act says only unserved food can be donated, such as food from buffet lines and salad bars.

But after two years being out of commission, Bruin Dine was able to relaunch its program in January.

Sure, UCLA doesn’t make all the rules when it comes to food donations – but if it had supported Bruin Dine during the past years, the program likely would have relaunched before a new decade.

This lack of support isn’t exactly uncharacteristic of the university – between lackluster support for the CPO and programs like Swipe Out Hunger, UCLA has let the responsibility fall on students. Instead of forcing students to bypass administrative barriers to end food insecurity, the university should work with students to find solutions. So far, all the programs offering solutions have started with students – the university has only hitched on the bandwagon.

Bruin Dine is one solution in a sea of other student-led endeavors, but these programs alone won’t always have the resources to feed people when the administration fails to take responsibility.

Marco Mejia, a first-year dance student, said that in order to live in the dorm he desired, he had to enroll in the cheapest meal plan.

“When I don’t have enough swipes, I just don’t eat,” Mejia said. “Buying food is inconvenient because I don’t want to spend more money.”

With the rising costs of attending UCLA, students are asked to sacrifice more and more financially. Sometimes, students are put in the difficult situation of having to choose between a decent dorm room or a meal plan that’ll actually provide all the meals they need in a day.

While it seems like the Hill’s nationally renowned dining halls would put students in a better position, there are several issues with the meal plans. With the cheapest option, Cub 11, students have an average of two meals per day for five days a week.

This is where programs like Bruin Dine can help. A common misconception about food insecurity is that students have no access to food outside of these resources – but students in Mejia’s position easily fall into the category of food insecure. Meal plans are also very costly, with the most expensive meal plan being $5,791.20 compared to the cheapest which is $4,539.48.

“One time, I was at dinner and didn’t realize I had used all my meal (swipes) for the week, so I had to have my friend swipe me in,” said Tess Kara, a first-year economics student.

UCLA has created a system in which students are forced to choose between comfortable living spaces and adequate sustenance. As such, it seems obvious that the university should pour funding and support into programs like Bruin Dine which attempt to right those wrongs.

Katherine Alvarado, a spokesperson for UCLA, said in an emailed statement that the university puts in as much effort as possible to try to help out students in need of food.

“Staff from both dining and housing are trained to recognize subtle signs of food insecurity among students and to unobtrusively offer to connect those who might need it to the Economic Crisis Response Team,” Alvarado said.

Although the university might think it is putting in its best efforts, its methods leave something to be desired. Ask any Rendezvous employee – food insecurity is rarely identifiable with a passing glance.

As a self-supporting institution, UCLA Housing and Hospitality Services is running directly on student fees – fees which should be going back to serving the Bruins that need the most help.

The university has billions of dollars, much of which comes from students. But as of now, it’s not going back to them. Bruins are already struggling to make ends meet, and an increase in food insecurity is all too likely.

Of course, programs like Bruin Dine have helped UCLA save large amounts of food from being wasted. The successful event ran out of food after nine minutes of being open and lowered the waste of food that day by 98%. Clearly, UCLA has effective and compassionate students – if only the administration took after them. There are several student-run organizations that are meant to help other students, but ultimately it’s an issue the multibillion-dollar university should be at the forefront of addressing.

Like many times before, the university appears to be doing the bare minimum for the maximum price.

And even though students are forced into paying thousands of dollars for meal plans every year, they certainly aren’t getting their money’s worth.

Oliva is an Opinion columnist.