By Marilyn Chavez-Martinez and Kari Lau 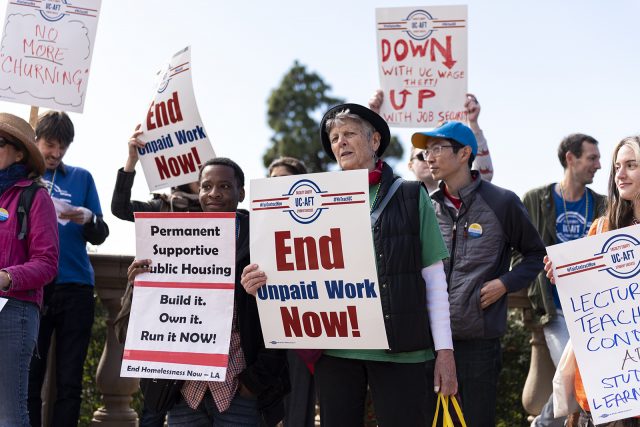 Non-senate faculty rallied Monday after their union contract with the University of California expired Friday.

The University Council-American Federation of Teachers Local 1990 represents non-senate faculty at UCLA such as lecturers and substitute teachers. Lecturers are nontenured faculty who work mostly with undergraduate students. The median annual salary for lecturers is only $19,900, said UC-AFT Local 1990 President Mia McIver.

Over 100 members of UC-AFT Local 1990 and its supporters marched to Murphy Hall from Bruin Plaza on Monday with postcards and letters of support from students as a part of the rally.

“The idea of these postcards of recommendation (from students) is to gather them as kind of a physical symbol of that student support so that we can go up there and hand them a big ol’ stack and say ‘Look, see how much our students support us, won’t you support us as well?’” said Caroline Luce, a member of the UC-AFT Local 1990 organizing committee and associate director of the UCLA Alan D. Leve Center for Jewish Studies.

Working without a contract means that the language of the previously established contract will remain effective. However, Luce, who is not currently a lecturer, said that could work more to the benefit of the UC since wage rates remain the same.

“What it means is that the future is very uncertain, that we don’t have any assurance or knowledge of what our working conditions will be in the future,” McIver said. “It also means that we are no longer bound by the ‘no strikes’ language that was in effect in our contract.”

When the contract is in effect, a union commits to not go on any strikes during the period of that contract, McIver said. However, now that the union is out of the contract, it will be able to participate in collective action.

The union has been in negotiations with the UC for nine months and is bargaining for faculty equity, job security and resources such as office spaces, access to departmental letterheads and a longer notice time before dismissal.

“One of the things you realize when you get together with other teachers in your situation is that these problems actually are chronic and sort of endemic, and that’s why it’s vital to us that they become part of the contract that will then protect us when issues arise,” Luce said.

For example, non-senate faculty are not guaranteed office space in their contract. One of Luce’s colleague’s offices is in a copy room.

McIver, a lecturer for UCLA Writing Programs, said the union is working to expand contract language to include work they already do, such as writing letters of recommendation, club advisory work and serving on committees. They are also fighting for a middle-class salary, McIver said. The income per capita in Los Angeles is $29,878 and $59,631 in Westwood specifically, according to AreaVibes.com, which assigns a livability score to areas based on cost of living, education and crime among other factors.

In an emailed statement, the UC said it is working on negotiating a fair agreement with the UC-AFT union as soon as possible.

“We believe our AFT-represented lecturers deserve a comprehensive contract that provides fair and appropriate compensation, benefits, position responsibilities, professional development, and performance evaluation,” the statement read. “We have been working diligently and in good faith for nine months to achieve this with their union.”

The UC has also reached 13 agreements with seven unions in the past several years, including with UC-AFT, which represents both librarians and non-senate faculty, according to the statement.

Chavez-Martinez was the 2020-2021 Outreach Director. She was previously an assistant news editor managing the campus politics beat and still writes for the Daily Bruin news section occasionally. She is also a fourth-year English and Economics student at UCLA.

Lau is currently the Outreach director. She was previously the 2020-2021 features and student life editor and a 2019-2020 News contributor for the campus politics beat.