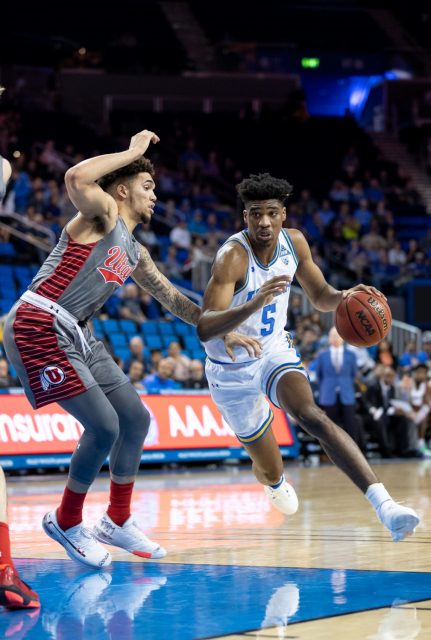 The 3-point shot was falling early for both teams, but it was the Bruin defense that made the difference down the stretch.

UCLA men’s basketball (13-11, 6-5 Pac-12) upset No. 23 Arizona (16-7, 6-4) 65-52 on the road Saturday night. The Wildcats had two separate stretches of seven-plus minutes without a field goal, the second of which lasted nearly 10 minutes and allowed the Bruins to build a double-digit lead.

The victory was the Bruins’ third straight in Tucson, and the 52 points by Arizona were the second fewest points UCLA has allowed to a Division 1 opponent this season. The Bruins’ 18 turnovers were twice as many as their nine takeaways, but they held the Wildcats to just 25% shooting from the field in the game.

Both teams hit six 3-pointers apiece in the first half, which consisted of seven ties and five lead changes. Arizona’s first four field goals were 3s and UCLA’s first three made shots came from downtown as well.

Even when they didn’t hit a 3-pointer, the Bruins still managed to end possessions with three points thanks to and-ones by redshirt freshman guard Tyger Campbell and redshirt sophomore forward Cody Riley. Eight of UCLA’s 11 scoring possessions in the first half resulted in three points, leading the Bruins to a 29-28 lead at the half.

UCLA led for the entire second half, but it nearly blew a nine-point lead when Arizona went on an 8-0 run over a four-minute stretch to cut its deficit to one.

On UCLA’s next trip down the court, junior guard Chris Smith hit a fadeaway midrange jumper that wound up sparking a 14-0 run to help the Bruins pull away in front of a sold-out McKale Center.

Arizona tried digging itself out of the hole by attempting 12 3-pointers in the second half, but it failed to convert on any of them after shooting 55% from deep in the first period.

Smith led UCLA with 15 points in 28 minutes on the floor, but his six turnovers were also the most on the team. Campbell scored in double figures for the third game in a row – the first time he has done so in his collegiate career – dropping 12 points on 50% shooting from the field.

Guard Nico Mannion – who was the No. 9 recruit in the country last year – entered the game as the Wildcats’ second-leading scorer with 14.5 points per game and leading passer with 5.7 assists per game. But on Saturday, Mannion went 2-of-14 from the field and finished with five points, zero assists and three turnovers.

UCLA has now defeated a ranked opponent in back-to-back weeks after it took down then-No. 20 Colorado at home on Jan. 30.