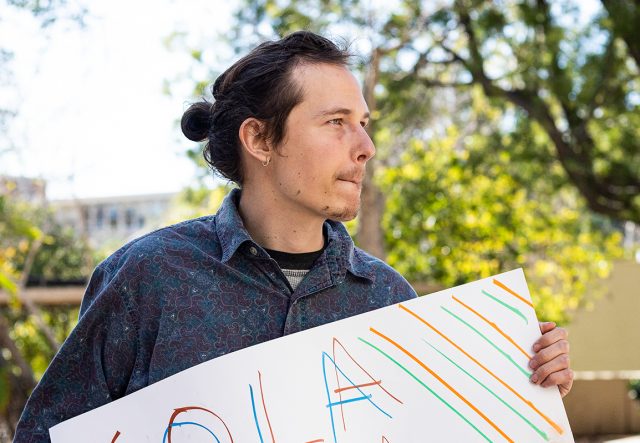 Dylan Fitzwater, an anthropology graduate student, holds a sign advocating for a new cost-of-living adjustment in calculating the stipends of graduate students. UCLA graduate students and supporters protested in front of Charles E. Young Research Library against these stipends, which they said were unsustainably low for the areas of high rent they live in. (Justin Jung/Daily Bruin)

UCLA graduate students protested against low stipends and a lack of affordable housing in front of the Charles E. Young Research Library on Monday.

The protest began at noon with a rally that saw about 30 attendees. About 60 supporters were present throughout the day, said Sita Mamidipudi, an anthropology graduate student at the protest.

The event was a show of support for ongoing graduate student protests at UC Santa Cruz. They also protested low stipends for UCLA graduate students and teaching assistants and called for a cost-of-living adjustment.

Graduate students are only paid about $20,000, which is barely enough to keep them over the poverty line, Mamidipudi said. The 2019 federal poverty guideline for a two-person household is $16,910, according to the California Department of Public Health.

Graduate students will use from 40% to 70% of their stipends on rent alone, Mamidipudi said.

“We can barely afford groceries; we have $20 a day for absolutely anything else apart from rent, including health care, including food, including transport,” Mamidipudi said.

The scarcity of tenure-track professor positions is also a problem, Fitzwater said.

UCLA is aware of the high cost of living in Los Angeles and is working with the Graduate Students Association and graduate students to find and implement solutions, UCLA spokesperson Ricardo Vazquez said in an emailed statement.

The issues faced by graduate students are similar to those faced by many other university workers, said Zak Fisher, president of the GSA.

“We were there today to show solidarity with graduate student workers, but there are all sorts of workers being exploited at the university at the expense of the rich and the wealthy and the ruling class,” Fisher said.

GSA also passed a resolution Jan. 22 expressing its support of graduate students who went on strike at UCSC. The unauthorized strike, which was in violation of university agreements with the union, saw teaching assistants withhold records of undergraduate grades for the fall quarter in protest. The ongoing protests criticized low stipends for graduate students and called for a cost-of-living adjustment.

The Jan. 22 GSA resolution also demanded no retaliation against the strikers.

In addition to addressing low graduate student wages, Fisher said that GSA passed a resolution calling on UCLA to increase access to affordable housing. The proposals included lowering rent prices and providing grants through the Economic Crisis Response Team, an office that provides assistance to students in a financial crisis.

The University of California is aware of the systemwide lack of access to affordable housing for UC students, said UC Office of the President spokesperson Andrew Gordon in an emailed statement. The UC is planning to expand student housing to accommodate 15,000 more students between 2021 and 2025, Gordon said in the statement.

Despite the UC’s plans to increase housing availability, Gordon also wrote the UC does not believe that the UCSC strike was helpful in the ongoing negotiations.

“The strike at UC Santa Cruz is illegal as it violates the no-strikes clause of our collective bargaining agreement with the United Auto Workers,” Gordon said in the statement. “We believe the strike at UCSC does not further the discussion on how to increase housing affordability for student employees.”