Depth in roster has its benefits, downsides for track and field 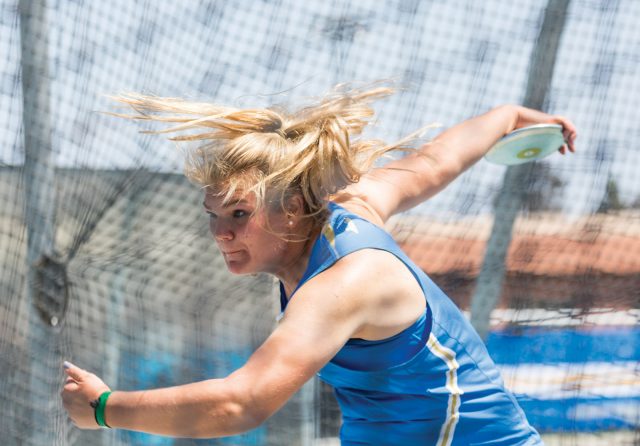 Junior thrower Alyssa Wilson is the only Bruin who has competed in every weekend for UCLA track and field. Her seven event victories lead the Bruins. (Daily Bruin file photo)

With a large roster and weekly meets, not every Bruin has seen action this season.

UCLA track and field has competed in its indoor season for the past five weeks and has another three straight weekends of competition before the team gets a break.

The Bruins have 121 athletes listed on their roster and have given newcomers and veterans opportunities to compete early on in the year.

Sophomore sprinter Kenyla Miles said the large roster has benefited the team, as teammates provide healthy competition for one another.

“The environment and depth (of the sprint team) actually helps us a lot because we can all push each other,” Miles said. “I’m older and I can help them so that they’re confident going into the meet and make sure that they’re ready to race and compete. Having us all in the same range and that depth that we have is a good thing.”

While UCLA has a large contingent that has already competed, the locations of the early meets have hindered the Bruins’ ability to give every member the chance to compete.

Junior thrower Alyssa Wilson is the only Bruin who has competed in every meet this season. While she has won seven events so far, she said she has started to feel the effects from a lack of rest just one month into the season.

“I guess you could say that I (felt it) in my last performances,” Wilson said. “But I’m an athlete and this is what I like to do, so I usually like to stick with the plan and go with the flow. I don’t feel that fatigued because I have a lot of fun performing and doing it, so it’s not so bad.”

Although the amount of meets an athlete may start varies, senior distance runner Jackie Garner said the team’s practices have allowed the older roster members to pass down the team’s culture to the freshmen and transfers.

Garner won her heat in the women’s 5,000-meter during the UW Invitational on Jan. 31. Following the meet, she said the team’s attitude of pushing each member to be his or her best self at all times has helped the Bruins stay competitive during the indoor season.

“We had a really good weekend across the board, a lot of people winning their heats,” Garner said. “And I think it comes down to the mentality change we have, and it’s producing more of a team culture where regardless of what you do, ups, downs, you come back in and compete.”