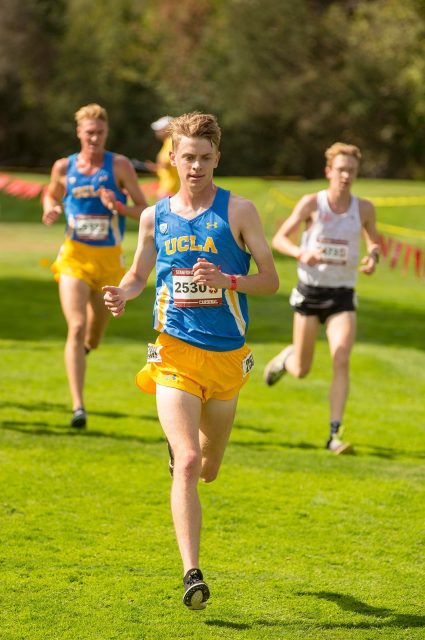 Redshirt senior distance runner Colin Burke notched a time of 13:47.77, the second-best indoor time in UCLA track and field history, in the 5,000-meter at the Husky Classic. (Courtesy of UCLA Athletics)

The Bruins took the national lead in the women’s weight throw and 400-meter dash this weekend.

UCLA track and field split up its travel squad for the second time this season. Sprinters and field-event athletes competed at the Don Kirby Elite Invitational in Albuquerque, New Mexico, on Thursday and Friday, while distance runners reported to the Husky Classic in Seattle on Friday and Saturday.

Junior thrower Alyssa Wilson took first in the weight throw with a mark of 22.98 meters, breaking UCLA’s record and taking the top spot in the country for the event. Wilson has now won at least one event in each of the past six meets.

Junior sprinter Shae Anderson won the 400-meter dash, finishing with a time of 52.07 seconds. The mark led the nation before being surpassed by one-hundredth of a second by a sprinter at another meet on Friday. Anderson improved upon the indoor school record of 53.46 seconds that she set earlier in the season at the Dr. Sander Invitational Columbia Challenge.

She also contributed to the women’s 4×400-meter team that took first with a time of 3:33.98, defeating Pac-12 rival Oregon by more than three seconds. The team also made its mark on the record books, finishing with the second-best indoor relay time in program history.

Sophomore sprinter Kenyla Miles ran a personal-best 7.44 seconds in the 60-meter dash to advance to the finals in the event and finish fifth overall. Freshman sprinter Chinyere Okoro placed 10th in the preliminary round of the 60-meter dash and took home a seventh-place finish in the 200-meter dash.

On the men’s side, sophomore sprinter Kenroy Higgins II and junior sprinter Myles Webb each qualified for the finals in the 60-meter dash, placing third and fifth, respectively.

A number of distance runners improved their personal bests at the Husky Classic, with a pair of Bruins each moving up to second-place on UCLA’s indoor record books.

Senior distance runner Riley Kelly also broke into UCLA’s all-time top-10 in the 800-meter, where he finished fourth overall in a season-best time of 1:49.25.