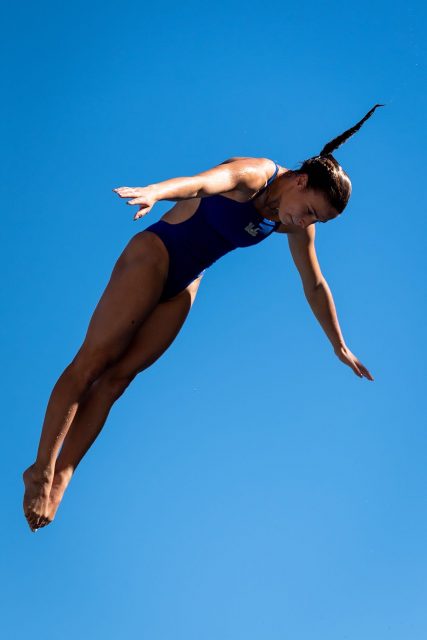 UCLA swim and dive finished off its regular season campaign by hosting No. 24 USC at Spieker Aquatics Center on Friday and Saturday. (Liz Ketcham/Photo editor)

The Bruins have competed for the final time at home this season.

Though the Bruins finished the regular season with a loss, freshman diver Hannah Butler said facing a team they will encounter again at Pac-12s would prove useful in postseason.

“It was just like a practice round kind of, but I think it went pretty well for all of us just to get a good practice in before we get really serious,” Butler said. “Definitely because, first of all, we’re not at home (at Pac-12s) so it’s a little bit less comfortable. And definitely, there’s just more pressure, but there’s also more adrenaline and more people cheering, and so to make sure I have more fun and also more pressure.”

Senior swimmers Maisie Jameson, Lisa Kaunitz, Kenisha Liu, Erica Vong and Okada were recognized in a senior ceremony before the competition. The only senior of the five who took home a win against the Trojans was Okada.

Neave placed first and second in the 1-meter and 3-meter diving categories, respectively. Butler also scored a career-high 280.65 on the 3-meter and finished third.

Unlike her teammates – who focused more on honing their dives ahead of the postseason – freshman diver Katie Shaheen said she had to use this meet just to get back into the routines of competition. After suffering multiple injuries this season that stopped her from regularly practicing her full set of dives more than a few times, Shaheen finished the platform diving event on Saturday with a third-place finish, despite dropping as far as fifth place in earlier rounds.

“I’ve been injured for quite a bit of time, so definitely getting back into competition has been the highlight of my season,” Shaheen said. “I’ve been preparing for meets in a different way just because coming from injuries, you’re kind of limited to other things.”

In addition to Friday’s meet, UCLA has also competed against multiple other top Pac-12 teams in the last few weeks, having previously also hosted No. 2 California and No. 5 Stanford over the past few weeks.

But while diving coach Tom Stebbins said these matchups do give the Bruins an advantage in having seen their opponents before the Pac-12 championships, he also said the team was more focused on improving their own skills instead of focusing on their opponents.

“If we’re doing what we’re supposed to do, we shouldn’t be affected by what anybody else is doing,” said Stebbins. “It’s nice to maybe get a sense of where we might stack up at in the end, but it’s not very critical because, again, they have to stand up there six times just like we have to. So whatever comes of that, we just have to focus on being at our best, and if we do that, the results generally will take care of itself.”

The Bruins will get back in the pool for the Pac-12 championships starting Feb. 26.

Kim is currently a Sports and video contributor. She was previously a contributor on the swim and dive beat.