The Quad: Voting rights have expanded in the past 100 years, but barriers still exist 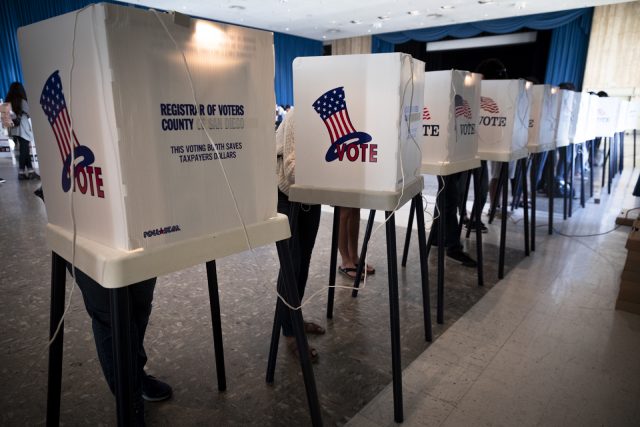 The United States has made strides in expanding the right to vote to more people, but there are still barriers to political participation for marginalized groups, including those with disabilities. (Liz Ketcham/Photo editor)

With a presidential election around the corner, it’s important to look back on the strides made in suffrage in the United States, such as women earning the vote with the passage of the 19th amendment. However, many people still feel marginalized and disenfranchised by the current political system.

Over the course of the nation’s history, elections have become increasingly inclusive, extending the right to vote to citizens of all races and genders over the age of 18. One of the last major landmarks of voting legislation, the Voting Rights Act of 1965, outlawed discriminatory practices, such as poll taxes and literacy tests, removing structural barriers to equal voting opportunities.

Many students at UCLA will be able to vote come November. However, many other students, and many people living across the country, will not.

Despite progress made in making voting possible for those of different races and genders, there are still systematic obstructions blocking the votes of other marginalized groups.

One example of such disenfranchisement was highlighted in Iowa earlier this month. The recent Iowa caucus illustrated the inability of many citizens to participate in the election, including the elderly and the disabled.

A caucus is a meeting wherein voters gather to show their support for their preferred candidate. Participants actively campaign for their candidate to convince other party members to join their faction. In the end, the number of people supporting each candidate determines which delegates will be sent from that precinct to the state party conventions, where these delegates will in turn elect national delegates according to the caucus results.

Caucusing requires participants to walk and mingle around a crowded and loud venue in order to show their support for a candidate. This process can take up to several hours.

[Related: A guide to the coming U.S. primary elections process]

The physical element of caucusing poses problems for those that cannot easily move around or handle the overwhelming atmosphere of a caucus, namely the 300,000 voting-age Iowans with disabilities. States such as Nevada, North Dakota, Wyoming and Kentucky are among those that also use the caucus model.

Caucusing is also difficult for those with young children and inflexible work hours, who cannot participate in such long, one-time events.

While many party leaders and politicians call for an end to caucusing for these reasons, Iowa’s position as the first state to vote for presidential candidates imparts a national importance they might lose if they abandon the caucus system.

In the meantime, many have demanded that political parties take measures to make caucusing easier for people who cannot attend as a result of scheduling conflicts, limited mobility and other obstacles.

For example, the Iowa Democratic Party proposed a plan to allow Iowans to participate virtually through the phone. However, the Democratic National Committee rejected this system because of its vulnerability to hackers.

The Iowa Democratic Party did, however, implement satellite caucuses to allow those who cannot access the official venues to participate in the election at smaller sites, including a satellite caucus held in American Sign Language. The party boasted other reforms this year as well, such as early check-ins and reduced realignment times.

Despite these attempts, disabled Iowans and other advocates argue that political parties are still failing to adequately accommodate these citizens. Namely, critics claim these changes place the burden of creating satellite caucuses and other accommodations on the disabled people themselves.

These reforms, however, neglect to address marginalization felt by felons.

Approximately 42,000 Iowans are barred from voting for life as a result of a felony convictions. Such felon disenfranchisement laws vary by state. While 48 states prohibit those in prison for a felony offense from voting, only four states, including the influential Iowa, bar people with felony convictions from voting after serving their sentence.

These laws are controversial because of their disproportionate impact on minorities. As of 2010, 7.7% of black adults were disenfranchised, compared to 1.8% of nonblack adults.

Nationally, almost 6 million people were unable to vote in the 2018 midterms because of similar state felon disenfranchisement laws. Reformers believe that less strict laws should be put in place to allow taxpaying citizens to vote after they have served their sentences.

For example, certain voter ID laws affect a disproportionate number of black and Hispanic voters, who – according to a report by The Atlantic and the Public Religion Research Institute – are about twice as likely to be affected by barriers to voting than white citizens.

Additionally, there are other potential barriers such as lack of access to voting information in a variety of languages, shorter polling hours and the closing of polling places in certain locations which may further limit the ability of certain populations to participate in important elections throughout the country.

Such barriers, both explicit and indirect, can reduce citizens’ voices and impact the democratic process. When voting is not universally accessible, Americans face the consequences of electoral decisions made by only a fraction of the electorate who are able to vote.

California voters, at least, do find themselves with fewer obstacles than their Iowan counterparts. While potential voters must be a U.S. citizen, a California resident and at least 18 years of age, voting laws in the Golden State do not bar voting for life after serving time for a felony. Additionally, voters in California can vote early and absentee.

Bruins who are eligible to vote can do so at UCLA voting centers in Ackerman Union from Feb. 22 to March 2, and at the Hammer Museum from Feb. 29 to March 2. These voting centers are part of an effort to make voting more accessible for college students, who might otherwise lack the time and transportation to vote elsewhere.

While the U.S. has come a long way in the past 100 years, the fears of many citizens in Iowa and across the country have illustrated the ways that voting rights can be further expanded.

If the next 100 years are as formative as the last, students will likely experience and contribute to the continual evolution and growth of the United States’ political system.

Students can register to vote in California at https://registertovote.ca.gov/.