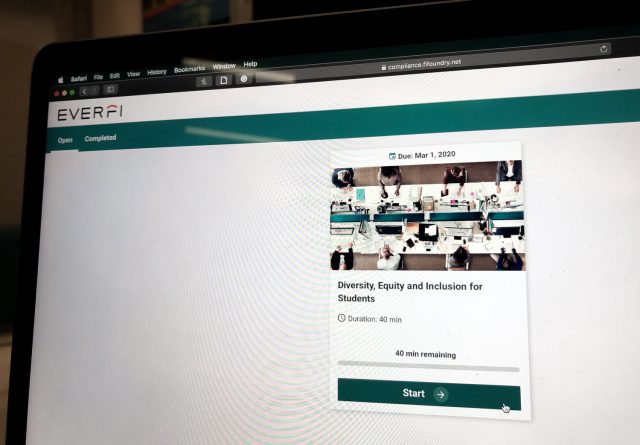 UCLA introduced a new equity, diversity and inclusion module at the beginning of the 2019 school year. This module does little to effectively address the outlined issues when resources and student organizations on campus are actively working toward finding solutions. (Daily Bruin file photo)

Diversity and inclusion are words UCLA frequently prints on signs, sends out in emails and even makes new vice chancellor positions to promote them.

But this laundry list of terms is often just a set of boxes for the university to check – and the new diversity, equity and inclusion module is no different.

The module was created by EVERFI, a third-party provider that specializes in designing online trainings. It was first released to incoming first years and transfers at the beginning of the 2019-2020 academic year, and has since been made available to all undergraduates – but completing the module is not required.

And it has all the stilted, awkward attempts at addressing very serious topics that one would expect from a university woefully out of touch with its student body.

The goal of the module is to give students an introduction to discussing identities in a respectful way – tackling issues like racism, microaggressions and privilege through personal stories and acted-out scenarios.

And while attempts to address the issues of equity and inclusion on campus are sorely overdue, the module’s cheesy acting and lack of interactive activities give it an impersonal feel that does little other than encourage students to click through it as quickly as possible. If UCLA truly wants to encourage inclusion on campus, it needs to recognize that doing something as personal as exploring one’s identity requires intimacy and conversation – things that are in vastly short supply from the university.

The module was created in response to an incident of racial profiling in 2018 in which an African American student was stopped without precedent by a member of UCLA staff.

But problems like these can’t be solved by a module that lacks nuance and substance.

Actors shouting racially charged statements at one another in a video is easy to identify as bad, but it doesn’t capture the harm that subtle microaggressions can cause in the real world. The result is a warped depiction of equity and inclusivity that doesn’t adequately educate students on how they can help form a more inclusive student body.

Granted, capturing the nuance of the real world is difficult to do in an online module, and it isn’t helped by how little campus organizations, such as the Afrikan Student Union, the Black Graduate Student Association and Undergraduate Students Association Council, were involved in its creation.

Justin Feldman, a fourth-year Middle Eastern studies and political science student and member of the Equity, Diversity and Inclusion Student Advisory Board, said he had relatively little input in the module.

“(Dean for Students Maria Blandizzi) basically laid out the structure of the EVERFI module and gave us a sample of it and then got some feedback from us – but that was one meeting,” Feldman said. “Long story short, we haven’t had much say.”

Part of the reason UCLA didn’t take student input into account is likely due to the limited flexibility of the module.

UCLA spokesperson Katherine Alvarado said that, for the most part, the company EVERFI is responsible for the module and there aren’t many opportunities to change it.

“The module, as it currently exists, provides minimal room for customizations. As such, most of the content remains as it was received from EverFi,” Alvarado said in an emailed statement.

This one-size-fits-all approach to diversity only further distances the module from the nuances of diversity on a college campus. And the fact that the university enlisted student organizations at all seems pointless given how limited their involvement was.

If UCLA really wants to promote diversity and equity, it needs to take advantage of the programs and expertise already present on campus.

The university could provide Bruins with the opportunity to have these important conversations, whether that’s setting up public forums, facilitating conversations for incoming freshmen or making use of UCLA’s huge number of cultural clubs on campus.

And the infrastructure for these alternatives already exists.

“These workshops are meant to provide a meaningful space for us to discuss various issues,” Khatri said. “It’s just a good way for people to learn more about these various kinds of issues in a more interactive sense and have conversations about it rather than just reading it or just being lectured on it.”

This kind of peer-to-peer learning interaction gives equity and inclusion a more personal feel, promoting understanding in a way that a module simply can’t.

However, there is limited student knowledge about these programs. UCLA needs to change this by expanding the scope of these workshops and more broadly publicizing their existence – not by contracting a third party to make an uncomfortable attempt at addressing diversity.

To be fair, in an email sent to all students, Blandizzi said that this module was simply meant to be an introduction to these topics – and there’s plenty of time to improve. But the fact remains that UCLA is offering little meaningful follow-up. The result is that students are given an introduction to multitudes of terms and experiences that they may or may not be familiar with, but have no outlets to discuss or reflect on them.

Hopefully, this will change. But until then, Bruins will have to enlist the help of their fellow students to learn about creating a more inclusive campus.

Let’s hope UCLA does the same.

Brophy is the 2020-2021 assistant opinion editor. He was previously an opinion columnist for the 2019-2020 school year. He is also a third year political science major.