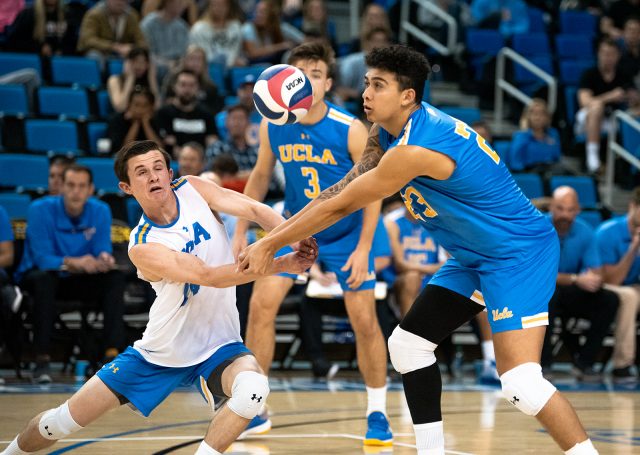 The Bruins do not have to wait long for a chance at redemption.

On Wednesday night against UCSB, the Bruins failed to win a set even while totaling more kills than the Gauchos over the course of the match. Following losses this season, UCLA has responded with more victories than defeats, sporting a 3-2 record in games immediately after being defeated.

Coach John Speraw said that the team has shown the ability to rebound from losses throughout the season.

“Well, we have had these really pretty large ebbs and flows of how we perform and we have bounced back and done a pretty good job,” Speraw said. “(Grand Canyon is) a good team that’s invested in volleyball and they have a talent base out there, so they’ve done a great job of recruiting and I think it’s a really really tough place to go and get a win.”

UCLA has never lost to Grand Canyon. Since the Antelopes started their men’s volleyball program in 2010, the Bruins are a perfect 5-0 in head-to-head matchups. However, against common opponents this season, Grand Canyon has a 3-1 record, while UCLA is 1-3.

“We’ve seen a really inconsistent level of performance all year long. We’ve had some good matches and we’ve had some really poor matches,” Speraw said. “So I think we’re going to have to really improve our performance significantly from (Wednesday) to get away with a win.”

The Bruins are heading down to Irvine to face a familiar opponent in the first round.

The Bruins have a 25-0 all-time record against the Tigers, with the most recent win coming Jan. 25 at the Michigan Invitational. UCLA won 14-7, but Pacific outscored UCLA 4-3 in the second half of the contest.

Coach Adam Wright said the second half showed that the Bruins were far from perfect despite the seven-goal difference.

“Being more consistent is always what we are in search of,” Wright said. “(Pacific) changed their defense at halftime – and give them credit for making the adjustment – but we’ve got to do a better job there.”

Wright said that one solution to staying consistent against fluid defenses is working on the transition game, using the counterattack to the Bruins’ advantage and to prepare themselves for a variety of Tiger attacks.

“If we have a good transition, then that’s going to open another phase of the game for us,” Wright said. “We have to be ready for them to press us really hard, have a full zone, players in the goal, so our transition (game) is going to be pretty key.”

After playing Pacific, UCLA will face either California or Michigan in the second game, which will take place Saturday. The Bruins are guaranteed four games over three days.

For the first time this season, the Bruins are going to the Midwest.

UCLA track and field will head to Notre Dame, Indiana, where the team will compete in the Alex Wilson Invitational. Six Bruins are scheduled to compete, five of whom are male distance runners.

Freshman distance runner Mason Ratkovich will race in the 800-meter and the mile. He will compete in the latter event alongside senior distance runner George Gleason, who will also run the 3000-meter.

Kelly says that the team is aiming to qualify for the NCAA Indoor Championships.

“(Qualifying for the national meet is) certainly the objective this weekend,” Kelly said. “We’re trying to go out there and run fast and get the national mark we need. The most important factor is to be really aggressive so we can run what we’re capable of and just get out there and compete with the other top teams in the country.”

This will be the first weekend off in five weeks for many Bruins, including junior thrower Alyssa Wilson, who has won an event every weekend this season.

Track events begin at 8 a.m., with the Bruins kicking off their day with the distance medley relay at 9:10 a.m.

The Bruins will look to pick up where they left off after 11 days of rest.

No. 7 UCLA (7-1) will host California (1-1) on Friday in non-conference action for its centennial match. It will be the Bruins’ first match since falling 4-0 to then-No. 2 North Carolina in the ITA Indoors Championship match on Feb. 10.

“Every team is going to keep improving and we need to do the same thing,” said coach Stella Sampras Webster. “We need to stay motivated, but they also have to manage their rest and make sure we get the most out of practices.”

UCLA holds a 45-35 all-time record against Cal. They also took both matchups last season, including a 6-1 conference win in their last matchup on March 30. Sampras Webster said she hopes the Bruins can count on their top doubles duo of sophomore Elysia Bolton and redshirt senior Jada Hart to help continue this recent success against the Golden Bears.

“They really dominate that position,” Sampras Webster said. “They are really fun to watch and the rest of the team is very inspired by how they play.”

Bolton and Hart were undefeated at the ITA indoors and were rewarded by being raised to No. 1 on the Oracle/ITA Rankings. Freshman Sasha Vagramov was also named the Pac-12 Player of the Week for the week of Feb. 3-9 after clinching all three of UCLA’s wins at the tournament.

Even with their recent success, Sampras Webster said she wants to see more improvement – starting with the next few matches.

“We have great players and all the tools,” Sampras Webster said. “It’s just a matter of putting combinations together that will allow us to almost guarantee another point.”

The Bruins will face off against a fellow UC school.

UCLA men’s tennis (5-4) will take on UC Irvine (3-2) on Sunday at the Los Angeles Tennis Center. The Anteaters will be heading to Los Angeles on the heels of a three game win streak, clashing with the Bruins who have a 3-0 undefeated home record this season.

Freshman Drew Baird posted a singles win against defending national champions, Texas, on Feb. 14, but said that the team needs more experience under its belt.

“We’re doing a full schedule and everyone’s healthy,” Baird said. “We feel like we’re going to be even more match-tough after Sunday.”

Senior Ben Goldberg was unable to earn singles wins against Texas and Texas A&M on Feb.14 and Feb. 15, but came back on Feb. 16 to clinch coach Billy Martin’s 600th career win against North Carolina State.

“My game improved more and more each day, and I ended up playing my best match on Sunday,” Goldberg said. “We did get better as a team each and every day so that was good.”

Goldberg said the mixed results prove that UCLA has the potential to contend with the best teams in the nation if the team unites through hard work.

“We need to work as much as we can,” Goldberg said. “But there’s a lot to look forward to.”

Lin was previously a Sports contributor on the women's water polo beat.