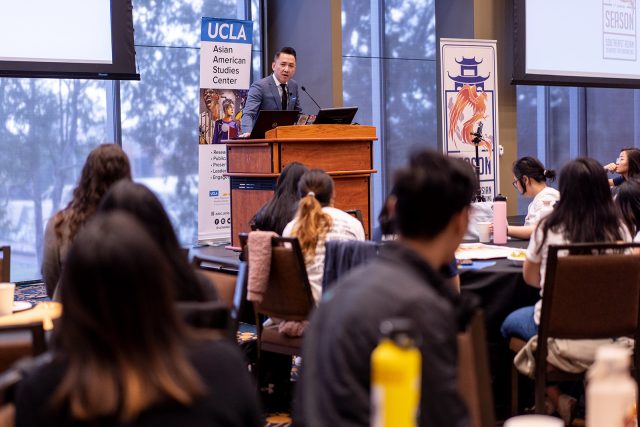 Author Việt Thanh Nguyễn was the guest speaker at the first Southeast Asian Students for OrgaNizing Conference and the 2020 David Nishida and Tina Yamano Nishida Distinguished Lecture on Saturday, touching upon issues such as the refugee experience and media representation of Asian Americans. The event concluded with students sharing their own experiences about being Asian American. (Xuxin Zhang/Daily Bruin)

The Pulitzer Prize-winning author spoke at the first Southeast Asian Students for OrgaNizing Conference and the 2020 David Nishida and Tina Yamano Nishida Distinguished Lecture on Saturday at Carnesale Commons. Introducing himself at the keynote podium, he discussed his experiences growing up in a refugee community, the issue of narrative scarcity and the need to honestly look at the nuances of one’s ethnic history.

Nguyễn first described his time at UC Berkeley, where he was introduced to Asian American history in a class taught by author Ronald Takaki. Only then did he recognize the conditions of voicelessness that he had lived in. He said he realized that none of the Asian American history he was currently learning had ever been mentioned in his past schooling. Nguyễn said the importance of finally being able to call himself Vietnamese American struck a chord in him. Raised in the “us versus them” mentality of the refugee community, Vietnamese refugees often compared themselves to other refugee populations and groups, Nguyễn said.

“I had grown up in a Vietnamese refugee community, and we only called ourselves Vietnamese, and when we said the word American, we were talking about other people, not us,” Nguyễn said. ”Do I have to choose between being a Vietnamese or an American? And it felt like I did. … Coming to Berkeley, I could call myself an Asian American and a Vietnamese American, as well.”

Community organizing and ethnic studies courses at universities like UCLA and UC Berkeley were meant to help individuals recognize their identities in themselves and demand recognition, Nguyễn said. He then said he wanted to challenge those in the room to ask themselves, “Who am I not recognizing?”

He recalled his own high school experiences in which he and other Asian students had nicknamed themselves “The Asian Invasion.” Nguyễn said no one had called them that, but that they had learned to coin this phrase through racial attitudes in the media – highlighting his realization of the need for representation.

“What we need is a situation in which there are thousands of stories about us so that when one story screws up, it doesn’t matter,” Nguyễn said. “That’s why white people can go to watch a movie and if they don’t like it, they’ll say, ‘It’s just a story.’ Because it doesn’t matter. They have a million stories about them.”

The media industry needs decolonization, Nguyễn said. Creatives are subjected to the control of those running the production in publishing and Hollywood, he added. Nguyễn said he wanted individuals to think about how they could work toward the decolonization of their community while critically analyzing the role their community played in the colonization of others. His insight on the Vietnamese refugee community revealed the need for unity between different refugee populations – something current and future community members must work to create, Nguyễn said.

After the lecture, fourth-year geography and sociology student Victor Tran said it was engaging to have commonly discussed community issues like representation, student organizing and colonialism explained in a new light. He felt reenergized and was happy that while Nguyễn spoke, he also gave students room to express their own narratives, Tran said.

“How he reframed conflicts and engaged in being able to see different perspectives of dynamics and explain these concepts was meaningful for me,” Tran said.

Alumna Van Nguyễn, a former student organizer herself, said she had a positive experience hearing Việt Thanh Nguyễn speak on engaging in the duality of one’s identity. Even though she is no longer part of the student organizing space, Van Nguyễn said it was inspiring to see how one can carry this advocacy work outside of school.

“A lot of people can support their community, but it takes a lot to be able to look at your community and criticize it to see what other work needs to be done,” Van Nguyễn said.

Throughout his lecture, Việt Thanh Nguyễn shared anecdotes that brought insight on how to critically examine one’s community and understand the need for more Southeast Asian representation in the media. After listening to students share their own stories during his closing Q&A portion, Việt Thanh Nguyễn said it was important to remember that, sometimes, to stand with your community is to go against it.

“I believe that speaking against what my community believes in was also to speak with them and for them to bring them a truth that they would rather not see,” Việt Thanh Nguyễn said. “Sometimes, that is our obligation.”