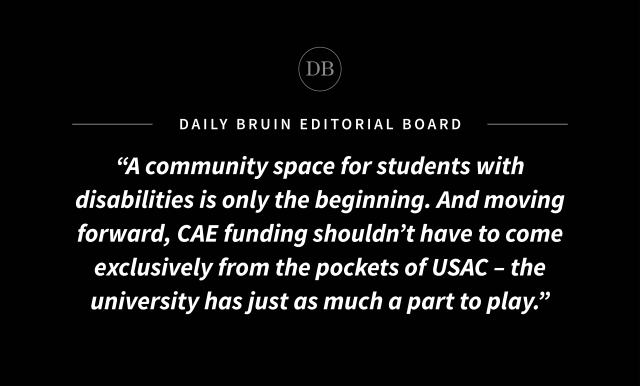 An accessible education can’t be built overnight – or with $35,000.

The UCLA Center for Accessible Education will undergo renovations to create a new community space for students with disabilities with funding from the Undergraduate Students Association Council and the Office of the Vice Chancellor for Student Affairs.

The money is undoubtedly being put to good use. Funding for renovations will go toward furniture, infrastructure and supplies for students in an Americans with Disabilities Act-compliant space that didn’t previously exist at UCLA.

But this much-needed stride toward supporting students with disabilities doesn’t dismiss the action required for other prevailing issues within the CAE.

Renovating the CAE addresses the long-standing structural boundaries affecting students with disabilities in the first place, including physical and logistical barriers to their education. While the development of a new community space can open conversations on how the CAE should improve existing infrastructure, an accessible education will require more than a renovated room largely funded by the student government. And instead of donating a measly $5,000, UCLA administrators should approach these renovations as a starting point for increased financial support of the CAE’s expansion of services and increased accessibility on campus.

Advocates have said the renovations signify the creation of a safe space and will allow for more programs for students with disabilities – an unquestionable improvement for the campus community.

But past calls for the administration to act have yet to be heard.

Students expressed frustration with administrators’ failure to offer inclusive Career Center programming. USAC Facilities Commissioner Lily Shaw has condemned UCLA for the inaccessibility of Bunche Hall’s elevators. The number of notes made available for students with disabilities by the CAE has dwindled since it decided to stop paying volunteer note takers. CAE’s lack of multiple vans means failing to transport students with specific transportation needs around campus, or getting them there late – just another class or section made inaccessible by an underfunded CAE office.

And UCLA’s approach to community engagement doesn’t give students much of a voice.

The USAC Facilities Commission hosts yearly town halls to receive feedback from students on how to improve the navigation of UCLA’s campus for those communities. But only in recent years have students with disabilities been included on these panels – and without a more consistent space to voice their concerns, students with disabilities aren’t able to discuss all the changes they’re looking to make.

Students with disabilities deserve a communal space where they can share experiences, seek resources and receive support from the school – and the decision to finally create one should be lauded. A renovated CAE office and an increase in student input mark progress regarding accessibility and inclusion at UCLA. But most of that progress has come as a result of student initiatives, whether they be USAC allocations or volunteer student note takers.

A community space for students with disabilities is only the beginning. And moving forward, CAE funding shouldn’t have to come exclusively from the pockets of USAC – the university has just as much a part to play.

An accessible education doesn’t start and end with access to one space – it requires being included in every space.