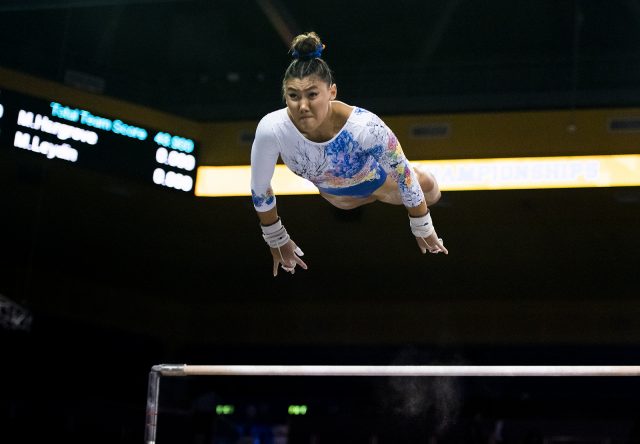 Senior Kyla Ross scored a 39.825 in the all-around Sunday afternoon for No. 3 UCLA gymnastics, her second-highest score in her career. Ross was one of the multiple gymnasts who set a season or career high in the meet. (Kanishka Mehra/Assistant Photo editor)

No. 3 UCLA gymnastics (5-2, 3-2 Pac-12) fell to No. 4 Utah (7-0, 5-0) on Sunday in Pauley Pavilion. Despite the loss, the Bruins recorded their highest event scores of the season on vault, balance beam and floor exercise; broke 198 in their final score for the first time this year; and garnered several personal and NCAA records.

Coach Chris Waller said the Bruins used what they have learned so far this season to come together and complete their highest-scoring meet of the season.

“I’m so happy for (the team),” Waller said. “They’ve been working so hard, and they got to show what they actually do in practice, finally. For them to put together what is a normal routine for them in a pressure situation – the weight must just be lifted off of them. They’re ready to fly.”

Senior Kyla Ross finished the meet with three event season bests and a season-high all-around score – 39.825. Ross’ all-around mark was the second highest she has received in her career.

Ross, who scored four perfect 10s on vault last season, had not managed to surpass 9.900 on the event before UCLA’s meet against Utah. Ross’s season-best 9.950 is the highest vault score posted by a Bruin this season, while her 9.975s on beam and floor tie her best marks this year on those events.

Ross said the entire team had to be in the right headspace to perform at a high level.

“It was all about letting go and enjoying (ourselves),” Ross said. “We’ve had moments where a couple people in lineup busted through and showed their potential. But, today, we could see it from every person that stepped up and saluted.”

Senior Felicia Hano also left Sunday’s meet with multiple personal bests, including a career-high 9.825 on beam and a season-best 9.950 on floor.

Hano was not the only Bruin with a career-high performance on beam. Senior Grace Glenn, who has been in UCLA’s leadoff spot on beam for two years, scored a perfect 10 on the event for the first time in her career after posting two 9.975s and a 9.950 earlier this season.

Apart from setting a career best for Glenn, the performance made NCAA history as the first perfect routine by a leadoff gymnast in any event.

“We’ve been trying so hard and training so hard in practice,” Glenn said. “It felt good to challenge myself, and I’m finally happy that everything paid off. ”

Two Bruins – freshman Kalyany Steele and junior Savannah Kooyman – posted career-high scores on uneven bars in Sunday’s meet. Steele’s 9.925 was a 0.075 improvement over her previous best, while Kooyman increased her career best by 0.025 with a 9.900.

Despite UCLA’s No. 2 ranking on the event, uneven bars was the only event in which the Bruins did not score a season high. UCLA’s 49.325 was its second lowest score on the event this season.

“It took us a moment to get rolling,” Waller said. “After (uneven bars), they glowed up. We’ve been good, but we haven’t put together scores like this, and we are going to keep getting better.”

The Bruins – who averaged 48.882 on balance beam prior to the meet – posted a 49.525 on the event, which represented a .150 improvement upon their previous season best. UCLA’s ranking on the event went from No. 22 to No. 11 in the aftermath of Sunday’s competition.

“We just keep improving,” Waller said. “I’ve got tremendous confidence in them every time they step out, so I’m always trying to help them release from going back and just go forward.”

UCLA and Utah became the third and fourth teams to pass the 198-point threshold Sunday. Each team will compete three more times before meeting again in the Pac-12 championship.