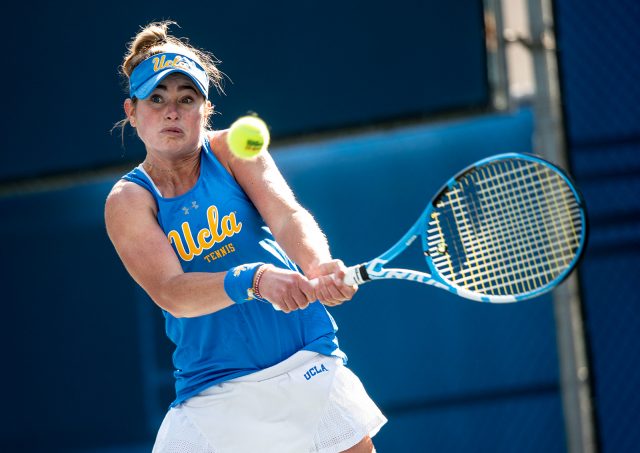 Marks Stadium’s capacity is less than a fifth of the Los Angeles Tennis Center.

But despite the vast difference in the size of the venues, coach Stella Sampras Webster said the Bruins will have to mentally prepare for the hostile environment of the small, 1,000-seat home stadium of the Trojans.

“It’s really our new players that we need to prepare,” Sampras Webster said. “Our returning players know. We (practiced) there Thursday so they (got) to see the courts and the way they’re laid out. They’re going to have to play against a hostile crowd and that’s what makes it so fun.”

No. 8 UCLA women’s tennis (8-1) will travel crosstown Friday to take on USC (6-3) in the teams’ first meeting of the season. The Bruins will come into Friday’s match after a win against California that included comeback wins on three out out of the six courts.

Those comebacks preserved the 7-0 sweep on the Bruins’ home court, and was just one of their 8 sweeps so far this season, as UCLA has swept every opponent except then-No. 2 North Carolina, which beat UCLA 4-0 at the ITA National Team Championships.

The Trojan’s top-ranked player, Angela Kulikov, is ranked No. 25 in the nation for singles and has tallied a 5-0 record in dual match singles this year. She will likely face off against sophomore Elysia Bolton – who has lost just once in the top singles position this year.

USC’s most recent results came during a three-game road trip to San Diego, where it went 2-1 on the weekend, falling to San Diego 4-1.

“It’s always a big an exciting match,” Sampras Webster said. “(There will be) lots of nerves because everyone wants to do well against them, but I think overall we’re in a good place and I’m happy with the way we’re competing. (We’re) excited to go out and get tested again.”

As Westwood has been hit with temperatures well into the 70s and 80s this week, the Bruins will kick off conference play in unpredictable weather.

UCLA men’s tennis (5-4) will travel to Seattle on Friday to take on Washington (8-4) at the Nordstrom Tennis Center before their Sunday clash in Eugene with the Oregon Ducks (9-3). Friday’s action will mark the Bruins’ first official Pac-12 match, despite conceding losses to UC Berkeley and Stanford earlier this season in non-conference play.

UCLA enters the weekend with both host sights unsure if matches will be conducted indoors or outdoors. Coach Billy Martin said the weather will be hard to predict on the road and that the team needs to be ready for anything.

“There’s always a good chance when going up there this early in the year to play indoors instead of outdoors,” Martin said. “With as cold as it is this time of year, we’ll most likely be going indoors.”

Seven freshmen and sophomores make up Washington’s roster, but Martin said his team must be prepared for a tough match regardless.

“Washington seems to be a little down this year, being a younger team,” Martin said. “But I know they’re going to want to defend their home and they’ll have a good crowd, as they always do.”

UCLA won last year’s match against Washington in a 4-0 sweep and and notched a 4-1 victory against Oregon at the Los Angeles Tennis Center. Martin said that despite their recent success against the Ducks, his team will be excited for a tough road match in Eugene.

“We’ve had such tough battles with them in the past and they still have a very good team,” Martin said. “So I’m expecting a real battle at Oregon.”

Friday’s match play will begin at Washington at 3 p.m.

The Bruins will seek to improve upon two consecutive seventh-place finishes this weekend.

UCLA men’s golf will travel to Las Vegas, Nevada on Sunday to compete in a 14-team field at the Southern Highlands Collegiate.

The Bruins have yet to place in the top-six of an event since Nov. 3, 2019, when they placed third at the Ka’anapali Classic Collegiate Invitational. Expecting to break that trend this weekend, Coach Derek Freeman said he was looking for improvement in his players’ mental games.

“If we make really good decisions and have a good game plan, our guys will play well,” Freeman said. “But they’ve got to do that for three rounds – not just one or two – and that’s what has been missing up until now.”

Juniors Devon Bling and Eddy Lai will remain in the starting lineup this weekend after Freeman said they played well in practice.

“I think those two guys have looked really good this week,” Freeman said. “There is a big difference between practice and tournament play, so we just have to convert that and make sure we look good during the tournament.”

Sophomore Bryan Wiyang Teoh will also continue to start this weekend and senior Hidetoshi Yoshihara will be making his first start since the Southwestern Invitational on January 27. The No. 5 position in the starting lineup will be determined closer to tee-off.

UCLA will begin play at the Southern Highlands Golf Club on Sunday morning.

This weekend is the Bruins’ last chance to qualify for the NCAA Indoor National Championships.

UCLA track and field will travel to Seattle to compete at the MPSF Championships this weekend, where the Bruins will face off with a number of programs in the Pac-12 and NCAA West Region. Athletes competing on Friday will have the opportunity to qualify for the Seattle Pacific Final Qualifier on Saturday.

The travel squad largely consists of distance runners. The women’s distance team will be led by junior distance runner Christina Rice, who will compete in the 5000-meter after achieving the third-fastest 5000-meter result in program history at the Husky Classic on Feb. 22, 2019.

“It’s another opportunity to run well,” Rice said. “But it’s just more exciting because you have the possibility of scoring and contributing to the team. I think that aspect definitely makes it more fun and exciting.”

The women’s sprint squad will also field a 4×400-meter team after dropping the 15th-best time in the nation at the Don Kirby Elite Invitational.

Junior thrower Alyssa Wilson will return to the throwing ring after taking a week off from competition. She will have the opportunity to reclaim the top weight throw mark in the nation after setting a program record at the Don Kirby Elite Invitational.

The action in Washington will kick off with the women’s weight throw at 12 p.m on Friday and the women’s high jump at 10 a.m. on Saturday.

Lieber is currently a Sports contributor. He was previously a contributor on the men's soccer and men's and women's golf beats.