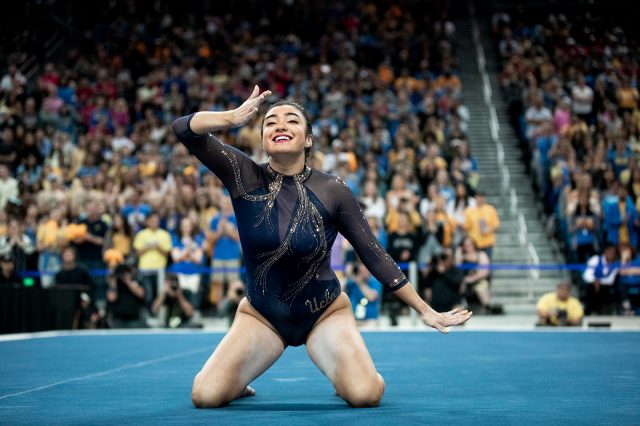 Senior Felicia Hano was the only gymnast for either No. 3 UCLA gymnastics or No. 18 Oregon State to compete in the all-around, in which she scored a 39.450, as the Bruins picked up another road win. (Tanmay Shankar/Assistant Photo editor)

The Bruins claimed victory in their final away meet of the season.

“We definitely had highs and lows,” said senior Kyla Ross. “It wasn’t our most consistent meet, but I think we still stayed strong throughout the whole time and didn’t let down when we had a mistake or problem.”

For the second week in a row, UCLA dropped uneven bars to its opponent, despite holding the No. 2 national ranking on the event.

The Bruins’ bars rotation featured an early fall from junior Savannah Kooyman and redshirt senior Nicki Shapiro’s season debut on the event. Ross’s event-winning 9.975 was the only UCLA score to break 9.900.

Ross’s 9.975s on bars and beam were her eighth and ninth of the season.

“I feel like, this season, I’ve done some of the best routines that I’ve ever done,” Ross said. “The rest is just up to the judges and how they perceive my routines. That’s all I can do.”

The Bruins’ 49.150 on vault was their second-lowest of the season on the event. UCLA’s highest individual vault score was Ross’ event-winning 9.875 – tied for her season low.

However, every Oregon State vault routine scored 9.775 or lower – leading to UCLA’s 0.425-margin victory on the event.

“We try not to think about the scores too much,” said senior Felicia Hano. “We try to do the best gymnastics we can, and if the judges reward us with what we deserve, then that’s it. If not, we’re still proud of our performance.”

UCLA scored a season-low 49.250 on floor just one week after posting a season-high 49.800. For the first time this season, the Bruins did not place first in the event.

The lowest score on the event came when junior Pauline Tratz overshot her front landing during her second pass and came up short, causing her to fall backward – resulting in a 9.150.

The Bruins saw their highest floor scores in the second half of their rotation, with a pair of 9.925s from senior Gracie Kramer and junior Nia Dennis in the fifth and sixth spots.

“(Dennis) is going viral right now,” said coach Chris Waller. “That can be a distraction, but she was normal the whole time in the meet and her floor routine was beautiful. Her performance was great.”

Ross won every event in which she competed and received one 10 and one 9.950 on both beam and bars, averaged to 9.975 for both events.

“From my perspective, I certainly thought that (Ross) deserved 10s on both bars and beam,” Waller said. “The meet (referee) scored her out of 10 on both of those events too, but the judges on the event just didn’t.”

Hano was the only gymnast on either team to compete in the all-around on Sunday – she scored a career-high 39.450.

“Getting comfortable in the all-around was the biggest key for me,” Hano said. “I’ve never done all-around before (this season), so every meet I’m chipping away and getting more comfortable every time, which I think is contributing to higher scores every meet for me.”

The Bruins will return to Westwood for a two-meet homestand before entering postseason competition.