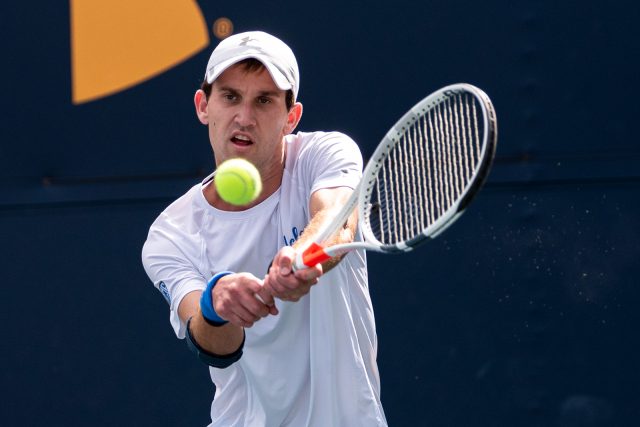 The Bruins’ trip to the Pacific Northwest ended with senior Ben Goldberg shaking his hips and waving his hands in the air.

Goldberg, who has clinched both of the Bruins 4-3 wins this season and has clinched four total victories, defeated the Ducks’ Riki Oshima, 5-7, 7-6 (5), 7-6 (1) after coming back from a 5-1 deficit in the second set and fending off eight match points.

“It was just an incredible comeback, facing 0-40 when being down 1-5, it was awesome,” said coach Billy Martin. “It’s always tough when everything is solely focused on you, and he rose to the occasion.”

Goldberg said that the support of his best friend, who plays for the Ducks’ men’s basketball program, and UCLA’s volunteer assistant coach Wil Martin pushed him over the top.

“I had the steepest hill to climb, but I never gave up,” Goldberg said. “They were right in my ear all match, watching me step by step, and it just helped me believe. I’ll never give up and I just kept on fighting.”

After sealing the match and silencing the Oregon crowd on an Oshima unforced error, Goldberg stared straight at his teammates and danced with his arms high in the air before being pummeled by the rest of the Bruins.

“Anytime (Oshima) won a point, their crowd was loud and cruel and that hurt,” Goldberg said. “So silencing them by winning made everything even better and then having my teammates going nuts every point, that’s what playing sports is all about. It doesn’t get any cooler than this.”

However, Goldberg’s tiebreak in the deciding set was far from the only other critical tiebreak in the match, as sophomores Patrick Zahraj and Mathew Tsolakyan both won their singles matches in tiebreaks as well, giving the Bruins a temporary 3-1 lead.

Tsolakyan – who has won all five of his singles matches since being penciled into the dual match lineup – beat Oregon’s Brandon Lam 6-3, 1-6, 7-6 (4), to continue his undefeated run. Zahraj won a second-set tiebreak against Washington, and he beat Oregon’s Luke Vandecasteele on Sunday 7-5, 7-6 (3).

Martin said that, while both players had periods of weakness, their wins set the tone for the rollercoaster match.

The Bruins had to fight back from a 1-0 deficit after losing the doubles point when the No. 24 ranked tandem of junior Keegan Smith and sophomore Govind Nanda suffered their first loss to a ranked opponent this season. They lost to the No. 11 doubles team of Joshua Charlton and Ty Gentry, 6-4.

Smith, ranked No. 8 nationally, quickly evened the score at 1-1 with a 6-2, 6-2 victory over Charlton in singles, pushing his record against ranked opponents to 8-4.

The Bruins will return to Southern California to compete in the Pacific Coast Doubles Championship in San Diego next weekend.

Edgar is currently a Sports contributor on the men's tennis beat.