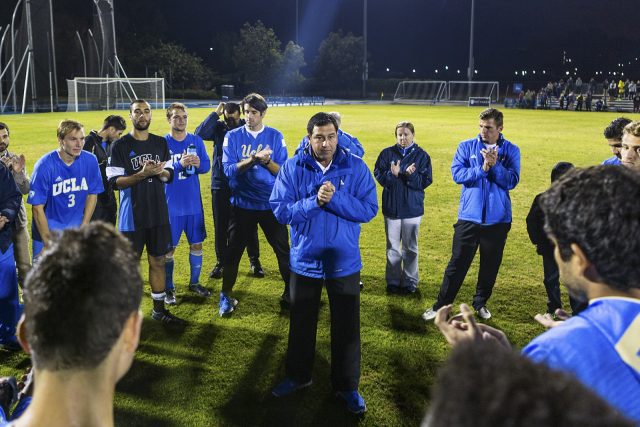 Former UCLA men's soccer coach Jorge Salcedo has alleged that the university has admitted applicants to its Division-I teams in exchange for donations. Salcedo resigned in March after reports came out that he accepted bribes to help admit students who had not played sports competitively get into UCLA through athletics. (Daily Bruin file photo)

It’s been nearly a year since Varsity Blues sent shockwaves through the nation.

And while the constant headlines and daily press coverage of the scandal have since winded down, the effects of the scandal are still fresh on the campus of UCLA.

On March 12, news broke that coaches across the nation had accepted bribes to admit prospective students as student-athletes, a tool to increase their chances of admission to highly competitive schools. Over the course of the investigation, authorities determined that coaches from seven schools – many of which boast prestigious athletic programs – played a role in these admissions practices.

UCLA was no exception to the investigation, as former men’s soccer coach Jorge Salcedo was named as one of the individuals who accepted bribes from Rick Singer.

Nearly a year since the scandal broke out, UCLA – both in the athletics and admissions departments – has worked to move past it, but the lingering effects have continued to affect both.

UCLA admissions promised to conduct more comprehensive checks on donations made from parents of possible applicants, while the athletic department agreed to add additional verification and compliance checks to all its incoming athletes.

But with even more outstanding allegations flooding in, all of this feels like a public relations move.

UCLA Athletics, on the other hand, pointed the finger at Salcedo and distanced itself from him after the charges were made public. Since then, the Los Angeles Times reported that the department knew of a possible admissions scheme in sports since 2014, and UCLA will now have to fend off allegations of an admissions culture that has been built on monetary greed.

In a motion filed Jan. 16, Salcedo alleged UCLA purposefully has admitted athletes that may not meet normal admissions or athletic standards for multiple teams – not just his. In his subpoena request, Salcedo suggests the university used this as a method to raise money through rich admits and recruit high-performing students to raise team GPAs.

The first part of his accusation tries to shift the blame for Varsity Blues from coaches to the athletic department. If the school knew parents would donate millions if their child were allowed to be on a Division-I program, then the argument could be made that universities are behaving in the same way as the accused coaches – allowing kids onto teams despite not possessing Division-I skillsets, all for the sake of money.

Universities thrive off donations from wealthy parents and alumni, and the quid pro quo of donating large sums of money in exchange for their child’s admission has long been an unspoken reality in the admission processes of top colleges. While this is technically not illegal, it falls under the same blanket as what the coaches did, albeit with a different benefactor.

If UCLA wants to make a real change, student-athletes coming from big donors need to be screened extra carefully, including determining whether photos are doctored. While this may seem unfair to prospective students with alumni parents, it would at least be a step in the right direction toward preventing something like this from being repeated in the future.

Salcedo and UCLA are both in the wrong here. Salcedo allowed himself to be drawn in by the prospect of more money and allowed students who did not play the sport competitively to join his team, knowing they didn’t deserve it.

UCLA may have wanted to keep this all under wraps, all while boasting a system that also allegedly admitted underqualified students.

To see both sides fighting with each other instead of owning up to their mistakes and changing for the better is a poor reflection on the university and athletic department. It feels like a slap in the face to every student and prospective student committed to doing the admissions process the honest way.