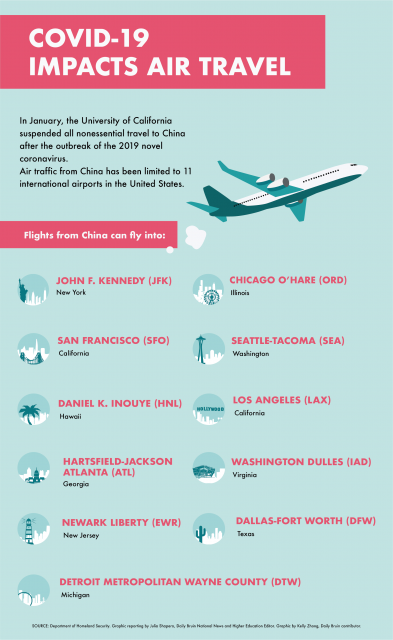 Clarissa Pham had already arrived at Yonsei University in Seoul, South Korea, when she found out the University of California was suspending her study abroad program.

The third-year biochemistry and economics student is one of many UC students whose study abroad programs in China, South Korea and Italy have been suspended, following the outbreak of the 2019 coronavirus.

“It’s not exactly easy to be able to just go and study abroad because there are not really that many options (for my majors),” Pham said. “And so I had been planning to study abroad for quite a long time.”

COVID-19 first emerged in Wuhan, China, in December 2019. The disease has since spread to over 80 countries, including South Korea, Italy and the United States, prompting travel bans, screenings and widespread emergency response.

UCLA announced a ban on all official university travel to mainland China, South Korea, Italy and Iran, which have all reached a Level 3 “Reconsider Travel” Warning by the U.S. Centers for Disease Control and Prevention, in an emailed statement sent Thursday to students. The email also discouraged all nonessential travel, especially to places with Level 3 travel warnings.

UCLA’s announcement follows the UC’s suspension of all nonessential travel to China, according to a letter sent by UC president Janet Napolitano to UC chancellors in January.

“The health and safety of our UC community is our No. 1 priority,” Napolitano wrote. “To that end, following both CDC and State Department guidance, I am directing the UC community to temporarily avoid all nonessential travel to China, while it is designated with a Warning Level 3 Travel Notice.”

Summer programs in mainland China also have been suspended. However, no fall programs have been canceled at this point.

The suspension of travel has affected many students who had been planning on completing these programs in the spring, Edmond said. She added that the UCEAP must follow UC policy to suspend programs that reach a Level 3 travel advisory.

“We abide by UC policy: Any location that the Department of State and the CDC elevate the travel advisory to a Level 3 or greater, we are required to suspend those programs and so once the level has been elevated to a Level 3, it’s not even a question of, ‘Should we?’” Edmond said. “We have to.”

UCEAP has attempted to maintain communication with students and within the office about COVID-19, Edmond said.

However, Pham said she wishes the UC had been more clear about the information. She said even after the US issued its travel warning and South Korea had been at a Level 2 travel advisory warning, students were not told that the program might be canceled.

“I think at least in terms of student welfare, (the UC) could have at least announced that those were going to be possibilities,” Pham said. “And then, at least when we got the email, it was unclear on what the options were at the moment. … It would have been definitely less stressful if they had just told us, ‘These are your options,’ immediately.”

Pham was given the option to take a leave of absence and return back to UCLA or to stay in Seoul. She decided to stay in South Korea and enroll at Yonsei University as an exchange student.

Pham said her semester in Yonsei has been delayed by two weeks because of COVID-19, and she will take the first two weeks of class online.

She added that she receives emailed updates from Yonsei on COVID-19, and is well-informed from Korean media on what to do in case she contracts the disease.

“They seem to be handling the situation quite well,” Pham said. “I know exactly what numbers I would need to call if I suspected that I had coronavirus. I know where I could go to get tested or where I would go for treatment. … There’s constant dissemination of information.”

South Korea has dealt with the outbreak through pop-ups on major websites, hand sanitizers in many major areas and discouragement of holding or attending large gatherings, Pham said.

“For the most part, I don’t think there’s rampant fear; at least, I’m not feeling fear,” Pham said. “I’m definitely feeling like there’s a lot of caution and people are definitely more careful. But I think the country has at least helped people.”