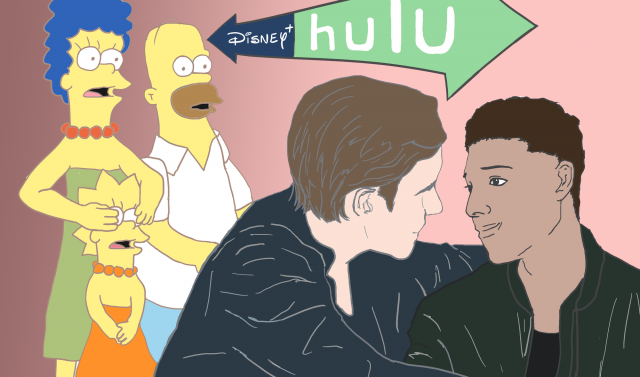 History repeats itself, and so does art. With films, video games and even books being flooded with sequels, remakes and spinoffs, audiences in recent years have appeared to embrace familiarity over novelty. In Recent Rewinds, columnist Phillip Leung explores the entertainment industry’s inclination toward reimagining and building on old stories.

Disney has come under fire for removing supposedly mature content from its new streaming platform. Recently, the decisions to cancel the “Lizzie McGuire” revival and move the “Love, Simon” series to Hulu have been viewed as cases of overt censorship. However, such choices are more likely a calculated risk from Disney to distinguish Disney+ in a crowded streaming market as it tries to establish its platform as a family-friendly and nostalgia-driven vault of content.

The main appeal of Disney+ when it was first announced was having access to nearly all Disney content. Everything from Marvel to animated classics to “Star Wars” would be on a single platform. Unlike other streaming platforms, such as Netflix and Hulu, which benefit from a wide variety of content, Disney+’s strategy highlights an abundance of one type of content – its own childhood classics.

[Related: A quick guide to some of Disney+’s original content]

The platform’s approach to original content follows a similar vein. Some of Disney+’s originals include a “Lady and the Tramp” remake, “The Mandalorian,” a prequel to the live-action “Beauty and the Beast” and eight Marvel shows. Looking at the platform’s content, it is clear Disney is betting more on nostalgia and entertainment rather than originality to sell its streaming platform. Netflix, on the other hand, is trying to establish itself as a platform for serious filmmaking, with Oscar-winning films such as “Marriage Story” and “Roma.”

Disney+’s overall strategy sheds some light on why the “Love, Simon” television series, titled “Love, Victor,” was moved to Hulu instead. According to Disney, the series fit better in Hulu’s catalog for its inclusion of adult themes such as alcohol use and sexual exploration. Disney also owns most of Hulu, meaning the company benefits regardless of which service the show is on. In fact, the decision may help Disney profit even more, as it separates Disney+ and Hulu as platforms for different types of content, incentivizing customers to pay for both.

The type of content Disney+ is aiming for also explains the canceled revival of “Lizzie McGuire.” After two episodes were filmed, the show was supposedly axed for being too mature and not family-friendly. Given the show’s close alignment with Disney, the revival wouldn’t quite fit under Hulu’s content either. Disney may have also wanted to maintain the family-friendly appeal of “Lizzie McGuire,” meaning the company’s only choice was to cancel the show.

While Disney+ may have a strategy of capitalizing on nostalgia-driven content, the “Lizzie McGuire” revival demonstrates the line that defines family-friendly content is arbitrary. A common example that many use to show hypocrisy from Disney+ is “The Simpsons” being on the platform. The show has attracted controversy for its mature content, with Hank Azaria recently stepping down from the role of Apu over concerns of whether the Indian character reinforces racist stereotypes. Despite being noticeably less family-friendly, the show is a staple on Disney’s streaming platform.

[Related: Recent Rewinds: Unclear whether Vine’s successor Byte will have a lifespan as short as its videos]

The show, however, is not completely free from Disney’s meticulous efforts to maintain its image. An episode from 1991 containing several references to Michael Jackson is not available on Disney+. Additionally, old Disney films with explicitly racist content, such as “Song of the South,” have either had scenes removed or are entirely absent on the platform. Disney clearly is not afraid to remove any content that could taint its family-friendly image, but the grounds for doing so are inherently subjective.

Such is to be expected, as Disney’s track record of respecting marginalized communities has been spotty at best. Many viewed the decision to move “Love, Victor” to Hulu as catering to homophobic viewers, while media arguably containing more mature content including “The Simpsons” and “Star Wars: Episode III – Revenge of the Sith” resides on Disney+.

Disney also seemingly embraces diversity as a mere marketing ploy, with films such as “Star Wars: The Rise of Skywalker” and “Onward” being publicized as containing LGBTQ+ representation – only to reveal such roles were given to insignificant side characters. As one of the world’s largest media conglomerates, Disney likely prioritizes profitability over sensitivity when categorizing its properties.

In the end, such small decisions likely play a minuscule role in Disney’s profit margins. Disney has a stake in or entirely owns so many other companies that a decision to cancel a single show or move one to another platform – one that it also partially owns – is of little consequence. Shutting down “Lizzie McGuire” or moving “Love, Victor,” as upsetting as it will be to some audiences, ultimately will not be detrimental to Disney+ in the long run.

One can only hope Hillary Duff has a picture-perfect plan to keep the “Lizzie McGuire” revival alive.