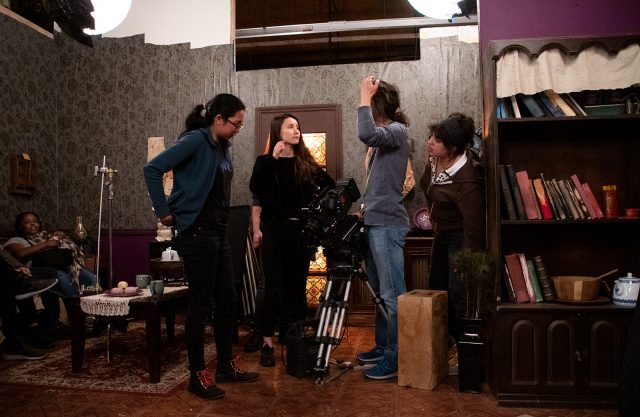 There is more to Yichi Zhang’s lollipops than meets the eye.

These colorful lollipops, which serve as the film’s most attention-grabbing prop, offer the audience a clue to the mystery that permeates the otherwise fantastical world of “Dream Lollipops.” Zhang’s new short film revolves around 15-year-old Su and her mother Yanying, who inadvertently becomes involved in the drug trade when she begins painting lollipops with drugged pigments, unknowingly delivering them to someone involved in the drug trade every day.

The graduate student said her film will utilize an apartment set built from scratch in Melnitz Hall to create a mysterious and magical world in which Su is sheltered from wartime by her mother. Rather than rent a real apartment in Los Angeles to shoot in, Zhang quickly realized building her own set would allow for her to craft the specific vision required for her story. Inspired by 1940s Shanghai but set in an imaginary city, the set needed to capture both the whimsy and the darkness that make up Su’s world. Zhang said the film’s mood is meant to capture the time in one’s life when they must leave behind fairy tales in order to face reality.

“It looks like a fantasy at first, but then you realize it’s actually a dark comedy,” Zhang said. “We wanted the apartment to have this magical feeling that’s separate from what’s really going on in the outside world, which is the war.”

Zhang relied on producer and graduate student Selena Leoni to secure the construction materials needed to craft the isolated, yet magical world. Leoni said the production design needed to subtly reflect the fantastical side of the story without going over budget, such as pairing green and purple instead of more complementary colors. Much of the apartment was made of recycled production set materials, and she said they borrowed furniture from places such as the theater department’s prop house in the interest of maximizing the film’s budget.

“We learned a lot about the time that it takes to build everything,” Leoni said. “You can’t do everything by yourself, so you have to calculate the time and people you need.”

With fewer than 10 people working on the art team, communication between the various crew members was essential in order to maximize productivity, Leoni said. Because of the small scale of the crew, Leoni said a lot of the physical labor fell on Beibei Hu, a graduate student and production designer. Hu said the experience was much different from other shoots where she simply had to choose a location and design the set dressing.

In addition to designing the color palette and doing a majority of the set construction, Hu said she also worked on balancing the film’s budget with the creative potential of the story. Since Su has been sheltered from the scariness of the world outside, the apartment had to reflect her whimsical worldview, she said.

The set features a green and purple color palette to give the film a mysterious atmosphere. It is also decorated with colorful artworks of lollipops on the walls, which Hu said are meant to reflect Su’s love of painting and her fascination with her mother’s work. From the detailed lollipops and paintings to the larger set itself, Hu said her role involved a lot of hands-on work.

“I built a part of the apartment by myself because we needed to control the budget,” Hu said. “I didn’t expect to spend so much money on the construction materials, but actually it took about 60% of the cost for our whole budget.”

Even after construction on the apartment and props had been completed, other members of the film crew had to work around the challenges presented by the set. Graduate student and cinematographer Hansuk Sohn said he had to grapple with how to maneuver camera equipment within the confines of this enclosed apartment set.

“(The space within the set) was rather limited,” Sohn said. “Sometimes we had to really get into the corner to get the frame that I wanted.”

Sohn said he requested specific pieces of equipment, such as a wider focus-pulling device, so the first camera assistant could pull focus while watching on a monitor rather than joining Sohn in the small set. Having complete control over the lighting also was a bonus for Sohn, who said it was easier to manipulate in contrast to the unpredictable nature of lighting an outdoor shoot.

Zhang said the shoot itself was easier than she anticipated despite the unique challenges the set presented. Once construction on the set was completed, the shoot ran smoothly and members of the production team like Leoni remained on set to solve any problems that arose. Zhang said despite the time constraints on set, all of the crew remained focused on their assigned roles, pulling everything together before filming began.

“Maybe five days before the shoot, we hadn’t really finished building the doors and the walls, and the apartment was all empty,” Zhang said. “But eventually, fortunately and magically, it all worked out.”