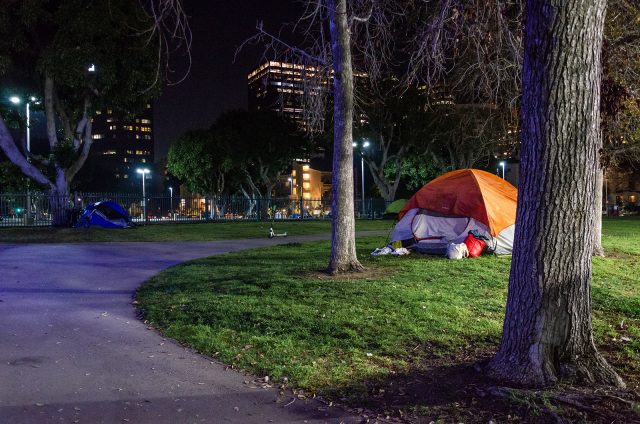 With residents ordered to remain at home, many people are still out on the streets and camped at parks in Westwood. To help them, North Westwood Neighborhood Council President Michael Skiles approved $1,000 to supply locals experiencing homelessness with food and necessities during the pandemic. (Sofia Gonzalez/Daily Bruin)

Westwood stakeholders are mobilizing to counteract the effects of the novel coronavirus pandemic on locals experiencing homelessness.

North Westwood Neighborhood Council President Michael Skiles authorized a $1,000 emergency fund March 12 using the Neighborhood Council Emergency Authority. The funds are being used to purchase and distribute short-term supplies such as food and water to those experiencing homelessness.

There have been at least 292 cases of the new coronavirus and two related deaths in Los Angeles County, according to the LA Department of Public Health. On Thursday, the county ordered all residents to stay at home unless necessary through at least April 19. California Gov. Gavin Newsom issued a similar statewide order the same day.

Some NWWNC members made a trip to Ralphs on Tuesday to purchase emergency items. Gabriel Durkin-White, a UCLA law student engaged in direct outreach, relayed those supplies to those experiencing homelessness around Westwood.

Noreen Ahmed, a council member, said she is uncertain if the funds will be enough to sustain the approximately 150 individuals who are homeless in Westwood for the next month.

“I do not feel $1,000 is enough to support this population, but I think it is in our duty to use it before greater relief efforts begin organizing,” Ahmed said. “It is a matter of life and death for some individuals, especially considering the even greater challenge to access basic needs.”

Some NWWNC members plan to request additional funds during the next board meeting on April 1, as any funds over $1,000 need board approval, said Councilmember Ernesto Arciniega.

Rhiana Caterisano, a member of the homeless advocacy organization Street Watch LA, said some of those experiencing homelessness are unaware of the ongoing COVID-19 outbreak, which makes them most vulnerable to the spread of the virus.

Some residents experiencing homelessness who use supermarket bathrooms have voiced concerns over potential closures that would leave them with no washing stations, said Durkin-White.

The LA City Council held an emergency meeting Tuesday to discuss efforts to mitigate social and economic damages that may be caused by the pandemic, and to prevent the virus from spreading on the streets.

The council passed an eviction moratorium intended to protect vulnerable residents from evictions and late fees for six months after the end of the crisis.

A provision of the controversial Section 56.11 of the LA Municipal Code that prohibits the assembly of tents during daytime hours will be temporarily suspended during emergency declaration, following additional city council action Tuesday.

The same motion, however, upheld another part of Section 56.11 that allows law enforcement to discard any personal goods that cannot fit in one 60-gallon container, a volume comparable to one large trash can.

Some opponents of Section 56.11 contend this temporary hold should become a permanent one. Caterisano said they think the code is inhumane regardless of the pandemic.

“This is an extremely cruel law that has led to (residents experiencing homelessness) losing personal belongings such as medication and personal documents during sweeps,” Caterisano said.

The city council also voted to install mobile bathrooms and wash stations near encampments during its meeting Tuesday.

Additionally, LA Mayor Eric Garcetti announced Wednesday that thousands of temporary shelter beds will be added to 13 recreation centers as a part of a series of emergency responses the city has enacted to slow the spread of the virus.