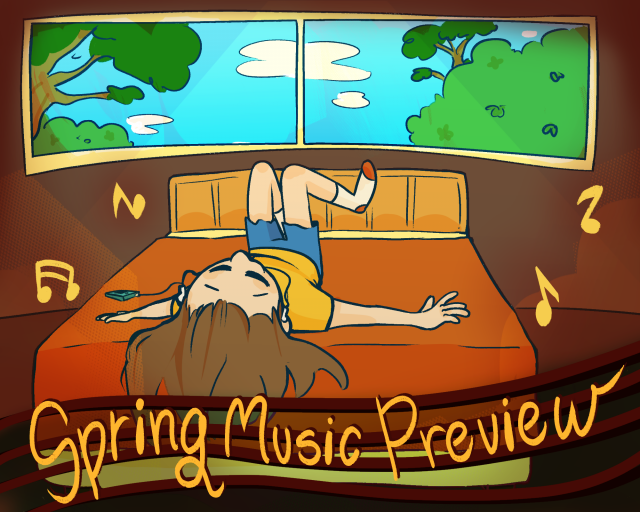 Everyone may be stuck inside this spring, but the comfort of new album releases will surely keep day-to-day life fresh. Listeners can trade in the high production on this winter’s albums, such as Halsey’s “Manic” and Green Day’s “Father of All…,” for raw, emotional releases that melt the cold and usher in the warmer months. Between musicians’ comebacks to the scene and some emerging into new phases, the music industry is in for a lot of new content as the school year comes to a close.

Keep reading to catch all of Daily Bruin’s top picks for albums to create the soundtrack for the season of new beginnings.

“Petals for Armor” by Hayley Williams

Sometimes it’s the softest feelings that offer the strongest shield.

On a break from her normal frontwoman position in the band Paramore, Hayley Williams is once again utilizing emotional lyrics as a vehicle for self-healing. Her debut solo record, “Petals for Armor,” has slowly begun to reveal itself with each raw and honest track, showing that the singer spares no emotion although she’s broken from the typical “emo” label she’s flaunted since her band’s first album in 2005.

Williams pulls away from the confines of the widely known group and seems to let her smoother and more stripped-back sound run its course on her new LP. To give listeners a hint at what they’re in for on the full record, the singer released a set of 5 of its songs titled “Petals for Armor I.” Its tracks drift between her struggles with the mortality of herself and others around her and also the experience of living alone.

Small details – like the singer’s shoutout to her own dog in “Cinnamon” – ensure that listeners will have the ultimate personal look into Williams’ life with “Petals for Armor” as she invites them into her own home. And with its silky smooth production revealed in the recently released tracks, Williams will likely impress fans and new audiences alike with her sure-to-be-intimate lyrical journey on the record when it drops May 8.


“Wake Up, Sunshine” by All Time Low

The “Last Young Renegade” era of 2017 came to an end when All Time Low teased its upcoming album through a series of cryptic videos in January.

“Wake Up, Sunshine” will not only kick off a new era for the Baltimore pop punk band but also mark its return to a theme of unity when it releases April 3. After a musical hiatus, vocalist Alex Gaskarth said the group had strayed from creating a record that included all four members’ collaboration, like their earliest albums starting in 2003. The band returned to writing the album collectively instead of separately as in ones prior, he said, allowing every member to, once again, integrate their own musical roles and emotions throughout.

The band’s upcoming eighth studio album will boast 15 tracks, two of which already dropped earlier this year: “Sleeping In” and “Some Kind Of Disaster.” In each of the songs, Gaskarth’s still clear and vibrant lyrics are reminiscent of his early years in the band, the upbeat instrumentals providing a sense of rejuvenation.

With the band under one roof again, “Wake Up, Sunshine” looks to be a classic All Time Low album. The Band CAMINO and blackbear each feature on a track, making the new LP likely to offer some fresh new tunes for what may be the band’s all time high.

Time has done nothing to dull the bold political discourse of the Dixie Chicks.

The country trio is back on the music scene for the first time in 14 years to bring “Gaslighter” to its waiting listeners. The album welcomes the Dixie Chicks back from its hiatus, following years of backlash the band faced after speaking out against President George W. Bush’s stance on the Iraq War. But with the album’s titular leading single, it is clear that nothing can stop the singers from telling listeners how they feel about the world’s hot button social and political issues.

The band’s classic three-vocal harmony opens the track with a modern take on its country twang. While condemning the act of gaslighting to get further in life, the song’s evolved country-pop fusion reveals the influence from artists such as Taylor Swift, who lended the trio a feature on her latest album.

Working with producer Jack Antonoff – who also helped produce Swift’s “Lover” – Dixie Chicks will likely solidify a contemporary take on country throughout the record once it hits radio waves May 1. And lead singer Natalie Maines goes into the release undaunted, as she opens “Gaslighter” by calling out the past actions of her ex-husband with a sound rooted in the present. It makes the upcoming record likely to follow in the footsteps of artists such as Kacey Musgraves – bringing the world of country rustic to polished radio pop.

Fans will be dying to listen to Sam Smith’s upcoming album – the first since 2017.

“To Die For,” the singer’s third R&B pop soul studio record and follow-up to “The Thrill of It All,” will feature 14 new tracks when it releases June 5. The new record has been teased at through the staggered release of each of Smith’s five singles – from “Fire on Fire,” which dropped in 2018, to the 2020 unveiling of its titular track.

As in past songs, the singer’s notions of romantic love have been expressed in the album’s already released singles, such as “How Do You Sleep?” Smith tweeted they are more proud of the upcoming album than any of their previous work as they felt liberated while songwriting. Smith said they hope fans can genuinely relate to the songs’ stories.

While Smith said their music has always been for the fans, it appears “To Die For” will be an ultimate love letter to them – and hopefully will result in an album listeners keep close to them for years to come.


“Such Pretty Forks in the Road” by Alanis Morissette

Alanis Morissette will welcome listeners into the most personal parts of her life for the first time in 12 years.

The “Jagged Little Pill” singer is set to release her upcoming record “Such Pretty Forks in the Road” this May, just shy of the 25-year anniversary of her 1995 debut album. Between opening a Broadway production and launching a summer North American tour to celebrate the record’s silver anniversary, Morisette has added a full-length album to her musical agenda.

Composed of 11 tracks, “Such Pretty Forks in the Road” has already been prefaced by its two leading singles, “Smiling” and “Reasons I Drink.” In an interview with This Morning, Morissette said the new record has allowed her to express emotions she didn’t previously want to acknowledge. The end result was a cathartic release of her feelings throughout her three pregnancies, as well as how she felt postpartum, she said.

In the singles released so far, Morissette’s same 1990s grunge and rock-inspired vocals shine. She peels back the walls to reveal her emotions as she tackles themes of addiction and deep sadness to the tune of whirring electric guitars.

The singer definitely held an outspoken place in the hearts of ’90s rockers, but with such heavy marketing placed on her first claim to fame, it will likely be difficult for her to create an album which stands on its own.