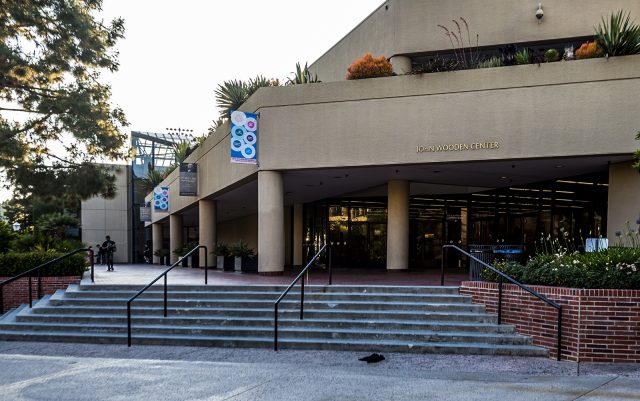 Following the closure of recreational facilities and other campus locations that employ students, many students are now left without a job for spring quarter. (Daily Bruin file photo)

A large portion of Kelsey Tsonton’s paycheck from her job as a John Wooden Center FITWELL consultant usually goes toward paying her tuition. But, like Americans across the country, she recently lost her job.

UCLA Recreation facilities closed until further notice on March 16, three days after UCLA announced its transition to online classes for spring quarter to help limit the spread of novel coronavirus.

“The closing of (John Wooden Center) essentially means that I’m out of a job for the time being and have no way to make money,” said Tsonton, a second-year psychology student.

Tsonton said she had already gone home before the John Wooden Center closed, out of concern for her health and safety, but had planned to go back to Los Angeles and work at some point during spring quarter.

Without her job, Tsonton will be financially secure as long as she is living at home. She relies on her paycheck more for day-to-day needs only when she lives on campus. Others aren’t so lucky, she said.

“Many of my co-workers are far more financially dependent on (John Wooden Center) and work upwards of 30-40 hours per week,” she said.

She had intended to remain at UCLA to continue working at them after classes moved online, but her plans changed when they closed.

“There’s around 90 people employed by the pools themselves, so it has a large impact,” Pomeroy said. “I’m sure that a lot of people really rely on this for groceries and rent and stuff like that. It was initially pretty disappointing.”

Although Pomeroy is a work-study program participant, she will be able to make her finances work without the job. Though it was not essential, the extra money did help, she said.

Work-Study is a federal program that helps students to pay for school-related fees through on- or off-campus part-time jobs.

Pomeroy said her manager has forwarded resources about unemployment hours to employees.

The John Wooden Center, meanwhile, sends out weekly updates to employees, and is brainstorming new opportunities for employees to make money despite facilities being closed, Tsonton said.

“I feel really fortunate to represent UCLA Recreation,” she said. “This time has been scary for everyone, but they’re doing everything they can to support us.”

First-year marine biology student Reina Robles started working at Rendezvous only four weeks ago. She’s since moved out of her dorm and will take her classes from home.

“I’m really hoping I can get a job when I go home,” she said. “I was thinking ‘Oh, if I stay here, I will have my job.’ But I’m not even sure about that because dining halls might downsize.”

In addition to UCLA Recreation facilities, which include the John Wooden Center and Bruin Fitness Center, campus libraries, museums and a majority of nonessential research laboratories have closed.

Despite students leaving campus, Robles’ most recent shift at the end of week 10 was just as busy as it usually is.

UCLA Housing Services stated in an email sent to students March 11 that it would continue normal business operations despite the closing of Covel Commons Residential Restaurant, which was already scheduled to close for renovations. Despite this message, Robles said that nobody is fully sure of what might happen in the future.

“My manager said she doesn’t even have many details but she will let us know anything she gets,” she said.

With the future of dining halls and more facilities on the Hill up in the air, many students are left not knowing whether to stay for their job or return home for their safety, Robles said.

“One of the student supervisors said, ‘As your manager, I’d rather you be here for your shifts. As your fellow student, if you can, get out,’” Robles said.