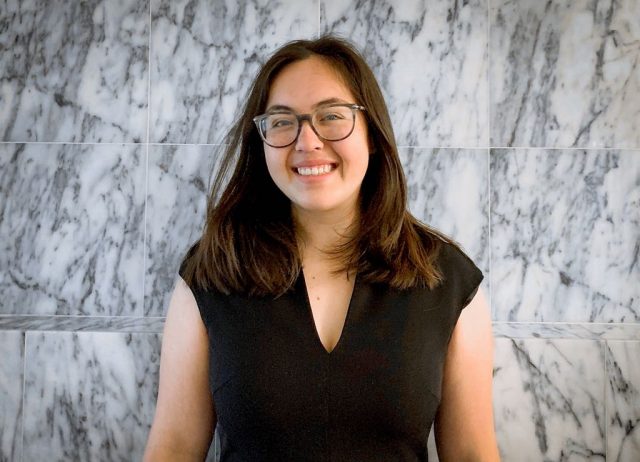 Melissa Morris, the assistant Enterprise editor and a third-year global studies student, was appointed editor in chief of the Daily Bruin for the 2020-2021 academic year by the UCLA Student Media Communications Board. (Courtesy of Melissa Morris)

The UCLA Communications Board appointed Melissa Morris, the assistant Enterprise editor, as editor in chief of the Daily Bruin for the 2020-2021 academic year.

Morris was the sole candidate for editor in chief this year. She was endorsed by the Daily Bruin staff in a hearing Friday night and appointed at a board meeting Monday.

Morris will take over the newspaper while production of the print paper and in-person meetings have temporarily halted due to the novel coronavirus outbreak.

She’ll face hiring and training an entirely new staff of editors remotely, managing an uncertain financial situation and steering the coverage of a student newspaper when student life has mostly ground to a halt.

But she’ll be up to the task, said Angie Forburger, the Daily Bruin 2019-2020 editor in chief and a fourth-year communication student.

“She’s motivated and willing to put forth whatever she needs to to get the job done, and also just (has) phenomenal news experience and news judgment,” Forburger said.

Although the situation at The Bruin is in flux after the start of a global pandemic, Morris said she isn’t concerned.

“I know that our staff is incredibly dedicated, so they’re going to make it work,” Morris said.

One of Morris’ primary aims for the upcoming year is to help increase the diversity of the Daily Bruin newsroom. She hopes to accredit the Daily Bruin as an academic class, establish scholarships for low-income student journalists and create a Daily Bruin outreach chair.

“It’s not fair to ask people to choose between an unpaid internship, or a barely paid internship, and a job that can actually help you with your day-to-day expenses,” Morris said.

She also wants to innovate to increase efficiency within the newspaper.

Hedy Wang, the 2019-2020 Enterprise editor and a fourth-year communication and economics student, said that in addition to her work ethic and news judgment, Morris cares genuinely for others and is always willing to go the extra mile to help her colleagues.

Wang has been Morris’ editor for the past two years, first as the News editor in 2018-2019 before working with her this year in Enterprise. She said Morris has been one of the best campus politics editors she has seen in her time at the Daily Bruin.

“I think everyone who’s worked with her – whether it’s her writers, or her co-assistants – everyone who’s seen those abilities in her has probably been inspired to carry that on in their own work,” Wang said.

Morris hadn’t been interested in pursuing journalism until she started at the Daily Bruin. In high school, she participated in the marching band and the Constitution Club, in which students participated in policy research and debate.

“She has the ability to see things from a completely different perspective,” said Megan Leahy, Morris’ government teacher and coach of the Constitution Club. “She can challenge people without being over-imposing and (is an) incredibly hard worker, thoughtful and strong-willed and independent, a dream for any teacher to have.”

Morris has been writing since she was young, said Emily Morris, Melissa Morris’ sister.

Melissa Morris had already learned how to read and write by the time she was in preschool, said Kristine Iwashita-Morris, Morris’ mother and a second-grade teacher. In preschool, Morris decided to write a report on the animals of Australia, which she presented to her class, taking questions from the audience, Iwashita-Morris said.

“I guess that was her first official article that she’s written,” she said.

Morris’ parents, both UCLA alumni, read the Daily Bruin every day while commuting to campus as students. Iwashita-Morris said because of that, they were excited when they heard she’d joined the newspaper staff.

“Her dad and I are so proud of her,” Iwashita-Morris said. “She’s always been a very caring person, and that’s something that I think we’re most proud of.”

Morris said she decided to run for editor in chief when she began thinking about some of the things the newspaper could be doing better.

“I realized that if I actually wanted to do it, especially because I’m going to be a fourth-year and this is my last chance, I might as well go big,” Morris said.

No matter what happens moving forward, the Daily Bruin will get through it, Morris said.

“We’re providing a service to people,” Morris said. “And maybe that service has changed because we’re focused more on the pandemic than whatever given campus event is going on. But at the end of the day, our job is just to help people, and we’re going to be trying to do that.”